The New York City Police Department is claiming that it never received an ICE detainer for an illegal alien who is now accused of murder, but the agency has since posted the detainer online for the public to see.

A 21-year-old Guyanese national, who is living in the U.S. illegally, is accused of sexually assaulting and killing a 92-year-old woman in New York City. This isn’t the individual’s first foray with the law — he had been arrested previously for an alleged assault against his father. Immigration and Customs Enforcement (ICE) had placed a detainer with the man after his first arrest, but that detainer was apparently ignored. The individual, Reeaz Khan, was eventually released and now stands accused of a much more heinous crime.

The New York City Police Department is claiming it never received any ICE detainer following Khan’s previous arrest. The NYPD “did not receive an ICE detainer in regard to this individual” upon his arrest on Nov. 27, Sgt. Mary Frances ODonnell, a spokeswoman for the department, said in a statement.

However, it appears that ICE kept the receipts. In a social media post on Wednesday, the agency posted the detainer it lodged at the time, and included a blistering statement against NYPD. 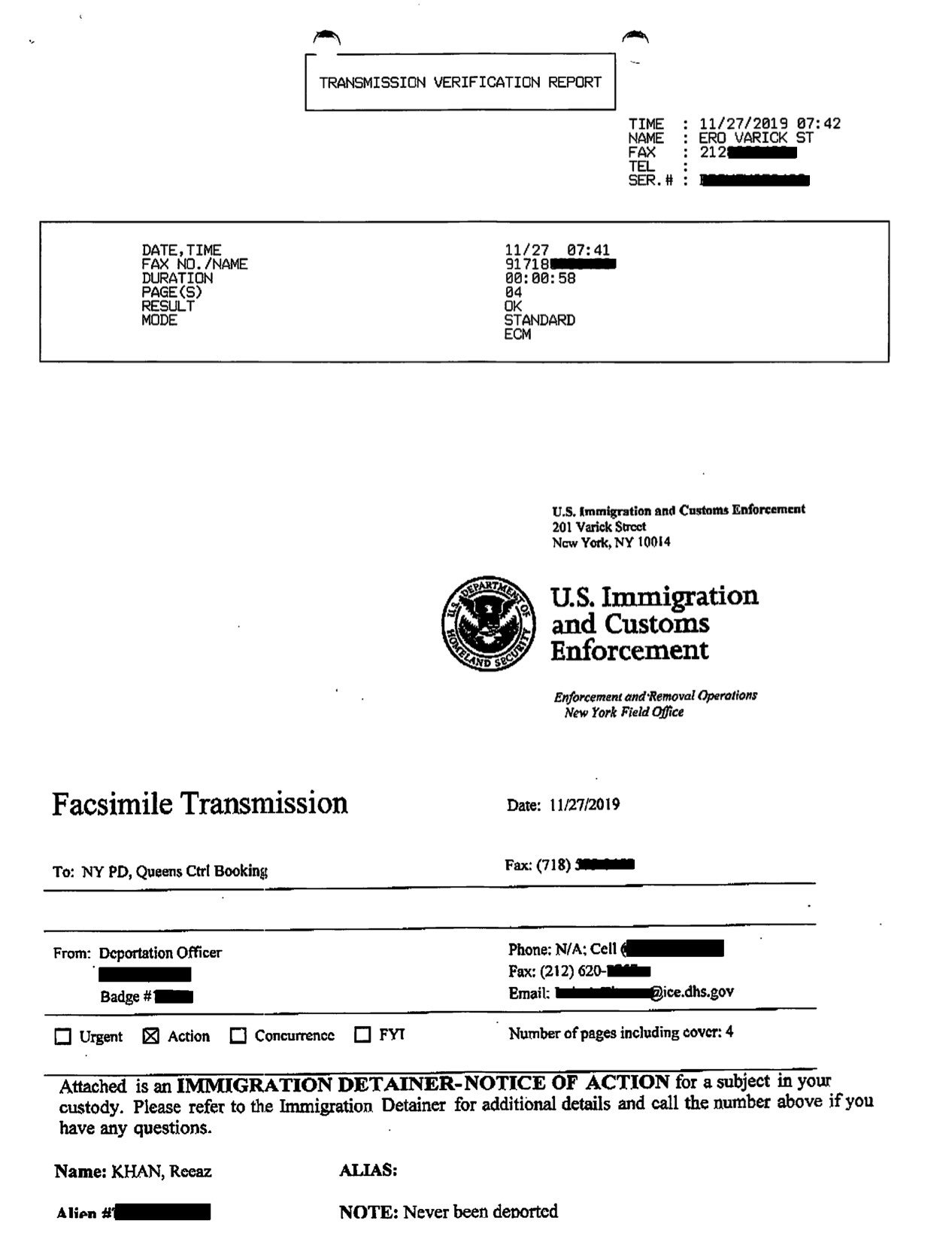 “It is the height of hypocrisy for NYC to blame ICE for this tragic crime. The mayor & police chief have continually celebrated that they don’t honor ICE detainers, & to deflect the criticism for this completely preventable murder is incredibly disingenuous & shameful,” ICE acting Matthew Albence said in a statement on Wednesday.

“ICE could’ve wallpapered the precinct with detainers & [NYPD] would still not have honored them,” he continued, highlighting the fact that it’s New York City policy to not cooperate with federal immigration authorities, particular when it comes to immigration detainers.

NYPD arrested Khan in November after he allegedly assaulted his father. The Guyanese national is accused of jabbing his father with a broken ceramic mug during an altercation. ICE says it lodged a detainer for Khan on the same day of his arrest, but that request was ignored by the NYPD.

As background, a detainer is a request made by ICE to a local jurisdiction that has a suspected illegal alien in their custody. That individual is typically arrested by local authorities for an unrelated crime, and is then put on ICE’s radar if they are found to be living in the country illegally. An ICE detainer asks local authorities to hold on to the individual for no longer than 48 hours, allowing an agent to arrive on scene and make an apprehension.

However, many Democratic-controlled states and jurisdictions across the country are becoming much more hostile to federal immigration authorities, and have outright banned law enforcement from cooperating with ICE. New York City is one such place. After Khan’s detainer was ignored, he was able to be released back into the public after his arraignment.

Khan was arrested on Friday after authorities linked him to the sexual assault and murder of Maria Fuentes, 92-year-old Queens woman who was walking outside at night collecting cans.

Prosecutors say surveillance footage shows Khan walking up to Fuentes sometime after midnight on Jan. 6. Both can be seen standing up and then falling down together. The two are then out of view for several minutes as they are on the ground behind a car. Footage then shows Khan running off.

Fuentes was eventually spotted and taken to a nearby hospital. Doctors found her to have broken ribs, a fractured spine, internal hemorrhaging, and tears in her vagina, according to the New York Daily News. She ultimately died of her injuries.

Khan, for his part, is vehemently denying hurting Fuentes, telling the New York Daily News that he was “crying about this too,” and claimed he found Fuentes on the ground that night and initially tried to help her. However, prosecutors say he has given conflicting accounts of what happened. At one point, according to authorities, he claimed he fell down, his belt broke and his pants dropped, and his dick accidentally flopped out near Fuentes’ genitals.

It’s not immediately clear if Khan entered the country illegally, or if he became an unlawful resident sometime later.

The situation regarding Khan marks the latest grievance between New York City officials and ICE. A spokesman for the agency had earlier blasted city officials for their “sanctuary” policies.

“In New York City alone, hundreds of arrestees are released each month with pending charges and/or convictions to return back into the communities where they committed their crimes, instead of being transferred into the custody of ICE,” Thomas Decker, field office director for ERO New York, said in a statement released on Monday.

“Clearly the politicians care more about criminal illegal aliens than the citizens they are elected to serve and protect,” Decker continued.