Daniel Goldman, the lead impeachment investigator for Rep. Adam Schiff (D-CA) on the House Intelligence Committee, claimed in 2018 that the Steele dossier was true and defended the FBI for using it to investigate then-candidate Donald Trump. 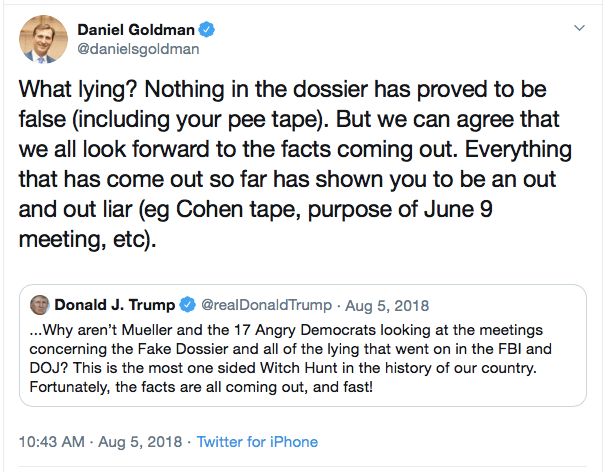 But the Department of Justice (DOJ) Inspector General (IG) report into FBI abuses confirmed Wednesday in testimony to the Senate Judiciary Committee that the Steele dossier was a fraud.

The IG also found that the FBI had misled the Foreign Intelligence Surveillance Act (FISA) court by failing to tell it that the Steele dossier was false, once it knew that for certain in early 2017.

Goldman claimed the Steele dossier was true in a tweet in August 2018 attacking President Donald Trump as an “out and out liar.” Goldman tweeted: “Nothing in the dossier has proved to be false (including your pee tape).”

However, by then it was already clear that several details in the dossier — published before Trump’s inauguration by Buzzfeed, and then by CNN and others — were false, and nothing substantive had been proven true.

The IG report makes clear that the entire Steele dossier was untrue, and had been constructed from material provided to Steele by a “sub-source” who later disavowed the information he had provided to Steele — including the so-called “pee tape” — as mere jokes, speculations, and barroom banter.

Rep. Matt Gaetz (R-FL) confronted Goldman with his anti-Trump tweet at the House Judiciary Committee hearing on Monday, after Goldman had declared, under oath: “I am not a partisan.”

Goldman did not limit his endorsement of the Steele dossier to Twitter. In a July 2018 article he co-authored for the Daily Beast, Goldman argued that the FBI had a duty to use the information in the Steele dossier to pursue its investigation of possible Russian infiltration of the Trump campaign.

In the article, co-authored with fellow former fellow prosecutors Mimi Rocah and Barbara McQuade, Goldman argued for the importance of hearsay evidence in investigations — just as he has defended hearsay evidence in the case against Trump. (A sub-headline even declared: “Hearsay is OK.”)

He wrote: “Even if the specific details in the Steele dossier are not directly confirmed, the fact that other evidence unrelated to the dossier corroborates the dossier’s main allegations is sufficient to support a finding of probable cause.”

But that “corroborating” evidence was also misleading.

Despite his incorrect and highly partisan endorsement of the Steele dossier, Goldman was presented to the Judiciary Committee as a credible former prosecutor, acting as Schiff’s representative as the Intelligence Committee offered its 300-page fact-finding report for consideration in the drafting of articles of impeachment against Trump.

Arguably, Goldman had no business investigating Trump after having been so wrong about the Steele dossier. Nor did Schiff, who had defended the FBI in February 2018 when Rep. Devin Nunes (R-CA) released a memorandum alleging possible abuses by the FBI in its FISA warrant application process.

Everything Nunes claimed has been vindicated by the IG; most of what Schiff claimed was refuted.

Goldman and Schiff, wrong about the Steele dossier, wrong about Russia collusion, and wrong about the FBI’s abuse in the FISA produce, now prevail upon the American people to accept their “evidence” in support of impeachment — even though that evidence is almost entirely hearsay, and Schiff has refused to make the primary accuser, the so-called “whistleblower,” available for testimony, as he had once promised he would do.