Homegrown Violent Extremists (HVE) are the highest priority for the FBI’s Counterterrorism Division (CTD) because the FBI believes HVEs currently present the greatest terrorist threat to the United States. Since September 11, 2001, HVEs have carried out over 20 attacks in the United States, some of which occurred after the FBI closed a counterterrorism investigation or assessment on the individual. Following these attacks, the FBI conducted reviews and determined there were weaknesses in its HVE assessment processes.

However, we found that the FBI has not taken sufficient action to address these weaknesses.

Shockingly, Horowitz cited 6 attacks that were committed by muslim extremists who had been on the FBI’s radar:

Funny that… the more expansive the surveillance state became, the less protected we were from radical Islamists… but the thicker the files grew on Americans.

Choirboy Robert Mueller was FBI director from 2001-2013 – 9/11 took place in 2001. Bush administration policy clearly determined a link between radicalized muslims and the attacks… so much so that they lobbied congress to authorize the war in the Middle East.

On February 8, 2013 Mueller was still the FBI director. He hosted a coalition of Islamist apologists and propagandists at F.B.I. headquarters on that date.

Among those that attended were various Islamist and militant Arabic groups who had in the past defended Hamas and Hezbollah and that had also issued blatantly anti-Semitic statements.

According to documents obtained by Judicial Watch, Mueller reportedly assured the Islamic groups in attendance that the agency had ordered the removal of presentations and curricula on Islam from FBI offices around the country that were deemed “offensive.”

NPR also reported that, “The FBI had completed a review of offensive training material and had purged 876 pages and 392 presentations, according to a briefing provided to lawmakers.”

Mueller ordered the purge of “offensive” material – including the exoneration of the Muslim Brotherhood – even after he had described the organization as a group that supports terrorism in the US and overseas.

Essentially, Mueller empowered terrorist propaganda front groups like the Islamic Society of North America (ISNA) and the Council on American Islamic Relations (CAIR) by purging the words “radical Islamic terrorism” from FBI training manuals even while he was expanding the surveillance over American citizens and our boys were still fighting a war in the Middle East ostensibly against radical Islamic terrorism.

Keep in mind that while our troops were fighting radical Islamists overseas, Obama’s Homeland Security Secretary Janet Napolitano was adding returning U.S. military veterans to the list of terrorist risks.

After President Trump took office he began ramping up efforts to shut down Jihadist training sites in the United States. That was in 2017. Comey had served as Obama’s FBI director since he replaced Mueller in 2013 until President Trump fired him.

The stories behind each of these failures is striking… especially when compared to the how they turned the screws on a patriot like Lt. General Michael Flynn who had dedicated his life to protecting Americans.

But then, it was from Flynn’s position at the head of the Defense Intelligence Agency where he learned of the Obama administration’s deliberate malfeasance/misfeasance when it came to Middle East policy and the infiltration of radical Islamists into our government.

It was during Comey’s tenure that three Pakistani nationals – Imran, Jamal, and Abid Awan were given access to the sensitive files and top secret documents on the computer’s of Democrat members of Congress. (read more)

No significant penalties resulted – to either the Pakistani spies or members of congress.

But, Carter Page, an Annapolis grad, Navy veteran, and CIA asset, had his life destroyed by Comey in an attempt to prevent Donald Trump from uncovering the seditious (treasonous) mess he inherited.

Was it the need to keep hidden this mess, along with the Democrats’ massive pay-to-play schemes that made them all wealthy, that led Jerrold Nadler to say this only days after President Trump was elected: 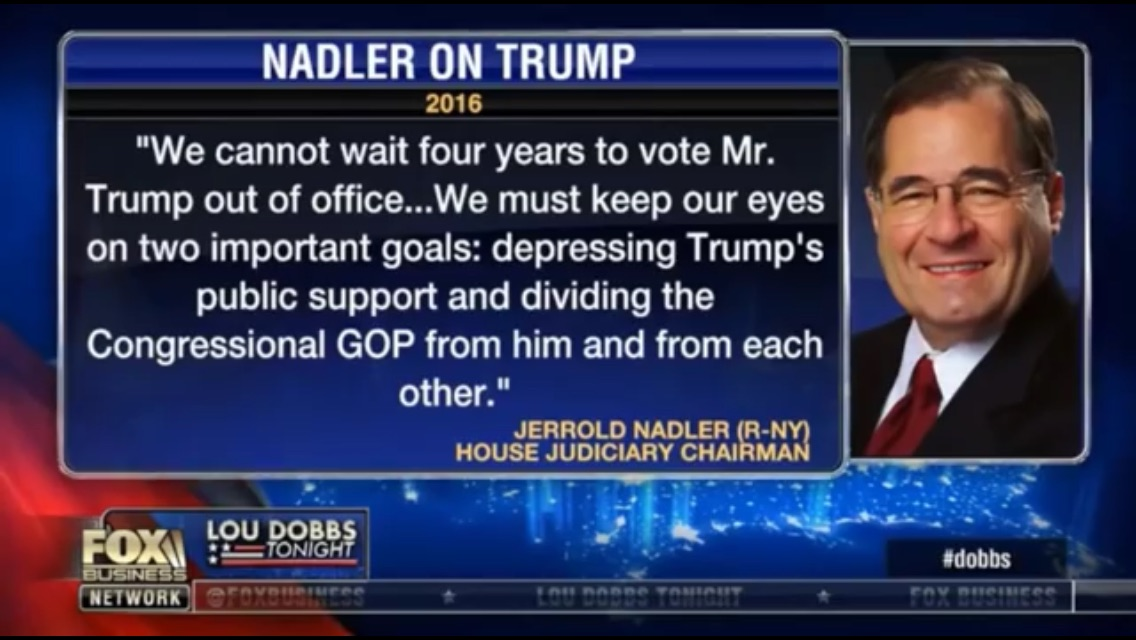