Congress has already passed — and President Trump has already signed — two coronavirus response packages. The third bill Democrats opposed in the Senate would focus on injecting money into the economy by bailing out industries most affected by the coronavirus social distancing efforts and giving Americans money through direct payments. In H.R. 6379, Nancy Pelosi’s Democrats took the opportunity to smuggle in some wish-list items that have nothing to do with the virus.

Here are nine of the most egregious proposals.

Identity politics provisions are nothing new in Democratic bills, but this coronavirus emergency package includes a specific program to help banks and credit unions owned by blacks, Native Americans, Hispanic Americans, Asian Americans, and women. Minority-owned institutions should be encouraged, but government programs to do so may end up undercutting them in the same way affirmative action programs cast aspersions on successful minorities. Whatever your position on such issues, they do not belong in an emergency coronavirus response bill. 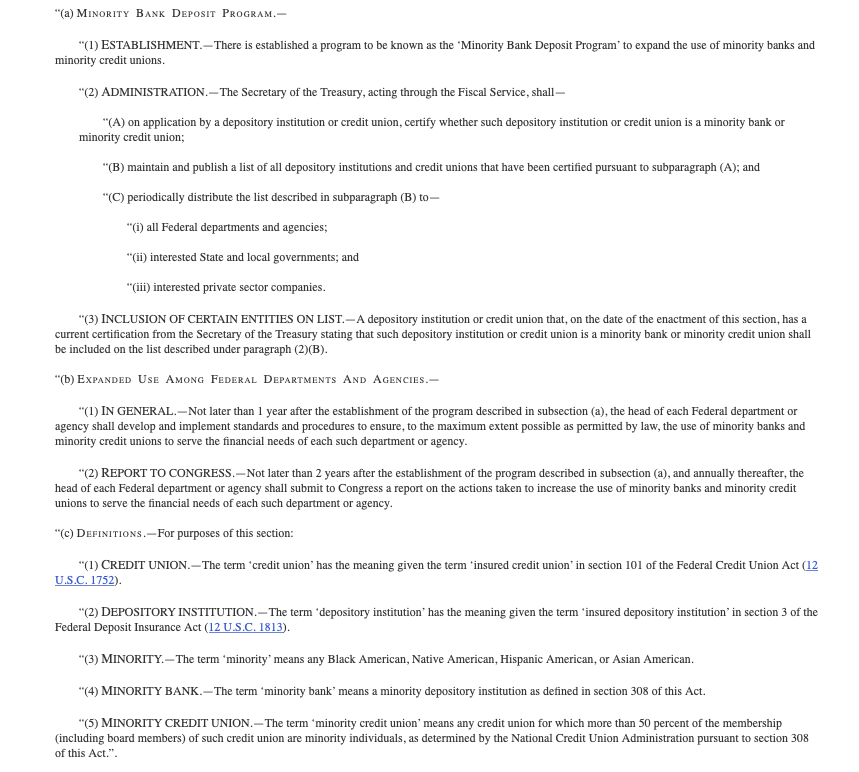 No coronavirus response would be complete without… $300 million in funding for programs to prevent and prosecute violence against women, right? This certainly would not be a diversion from fighting the coronavirus… 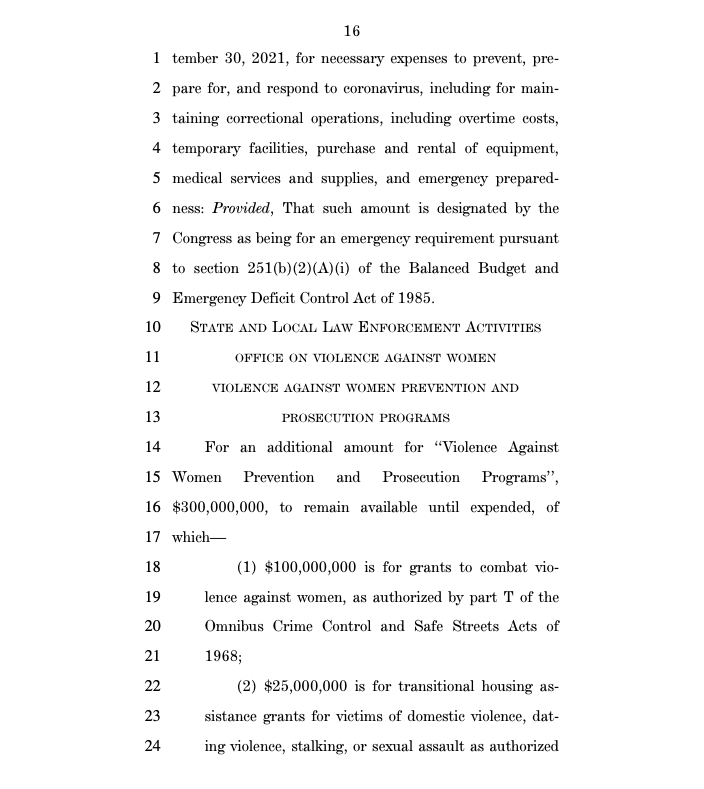 3. Funds for the Kennedy Center

Yes, the Democrats’ coronavirus emergency spending bill includes $35 million earmarked for the John F. Kennedy Center for the Performing Arts. Why should the Kennedy Center receive this money, instead of all the other theaters across America? Why does theater feature in the coronavirus bill? 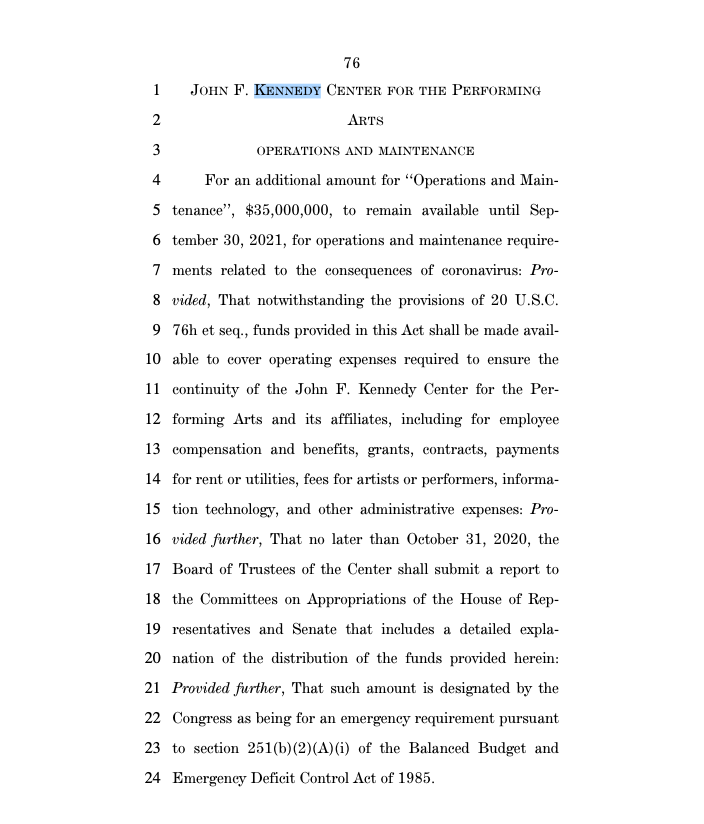 Pelosi’s bill sets aside $90 million to fund the Ryan White HIV/AIDS Program. Which disease is this bill fighting again? 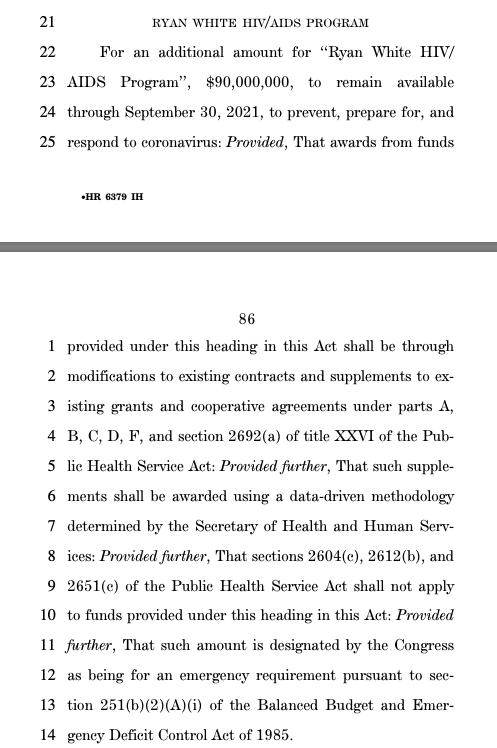 Neither abortion nor Planned Parenthood is specifically mentioned in Pelosi’s coronavirus spending bill, but another social issue found itself smuggled in. The bill provides for a “Financial Literacy Education Commission Emergency Response” which would “place special emphasis on providing an additional set of tools geared towards women, racial and ethnic minorities, veterans, disabled, and LGBTQ+ communities.” Financial literacy is important, but why the focus on this interest group? 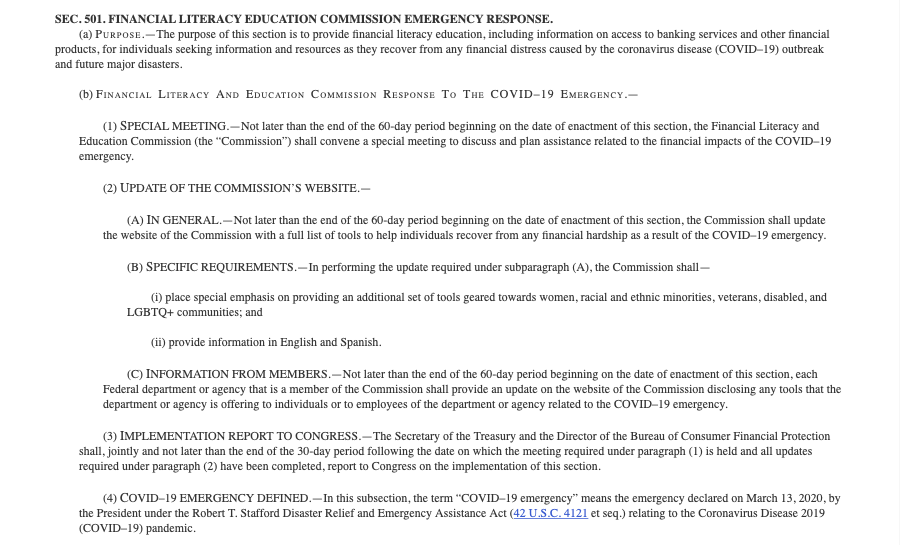 “At a time when many Americans have been told they can’t come to work and many don’t know how much longer they’ll have a paycheck, wealthy politicians in Washington, D.C., are exploiting a needed relief package in order to satisfy their public union masters,” Aaron Withe, national director of the Freedom Foundation, said in a statement. 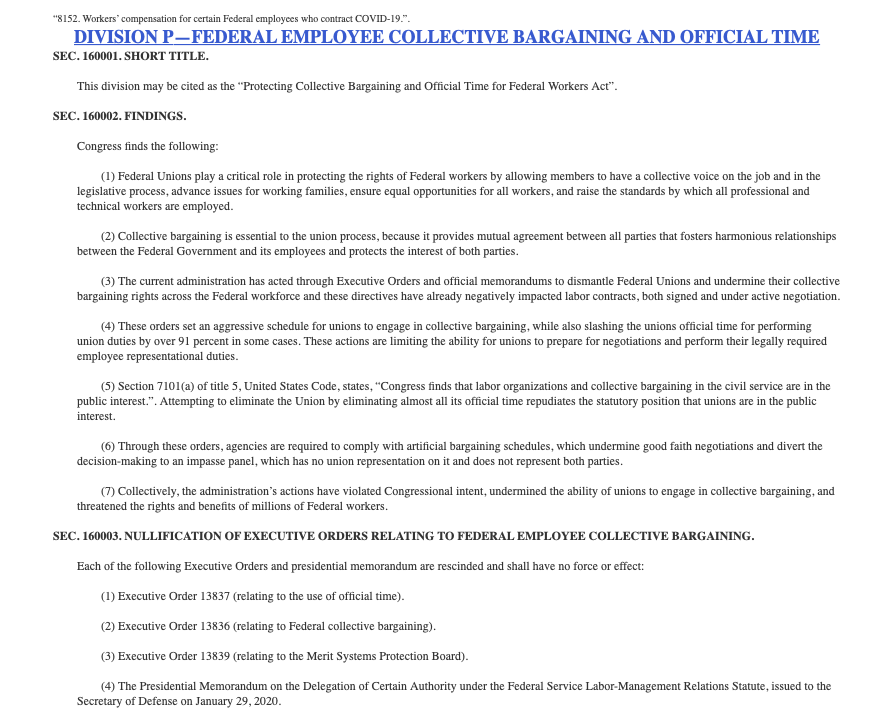 Pelosi’s bill does include funds for the airline industry, which is suffering acutely during the social distancing strategy to fight the coronavirus. Yet that money comes with conditions. First, the federal government “shall require each air carrier receiving assistance … to fully offset the annual carbon emissions of such air carriers for domestic flights beginning in 2025.”

It gets worse, however. By January 1, 2023, air carriers will have to present passengers with “information regarding greenhouse gas emissions resulting from each individual flight.” Such information must be “customized to account for such emissions associated with each aircraft and the flight route of such aircraft” and it must be “made available on the first display of any website selling any ticket for such flight.” This onerous burden would strain air carriers and may convince Americans to avoid flying altogether — which is likely the goal. 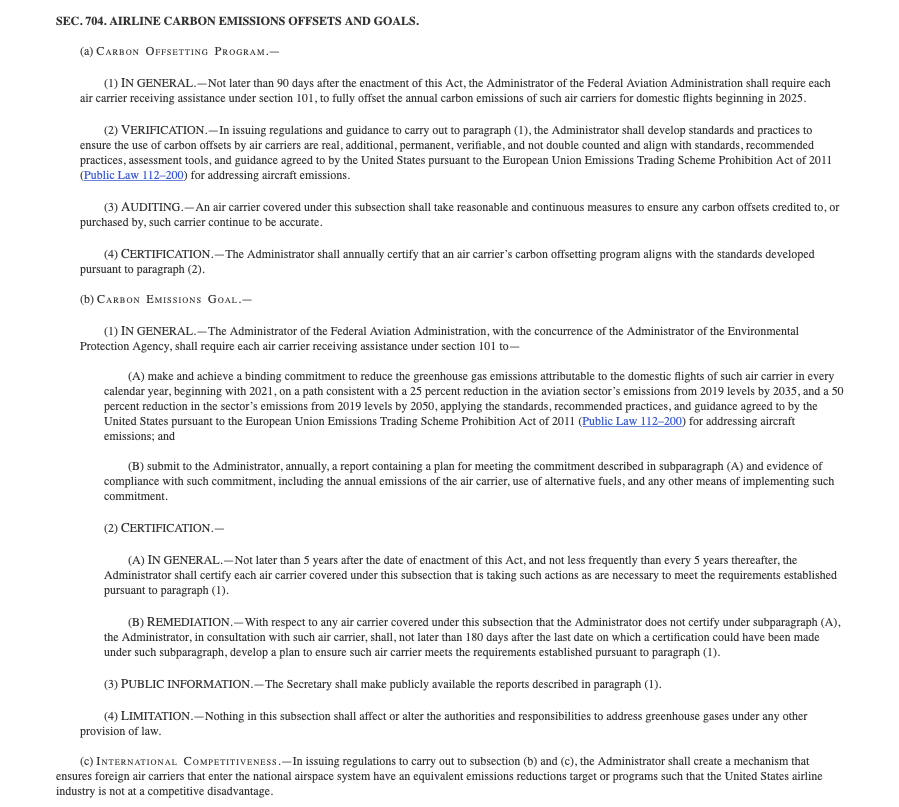 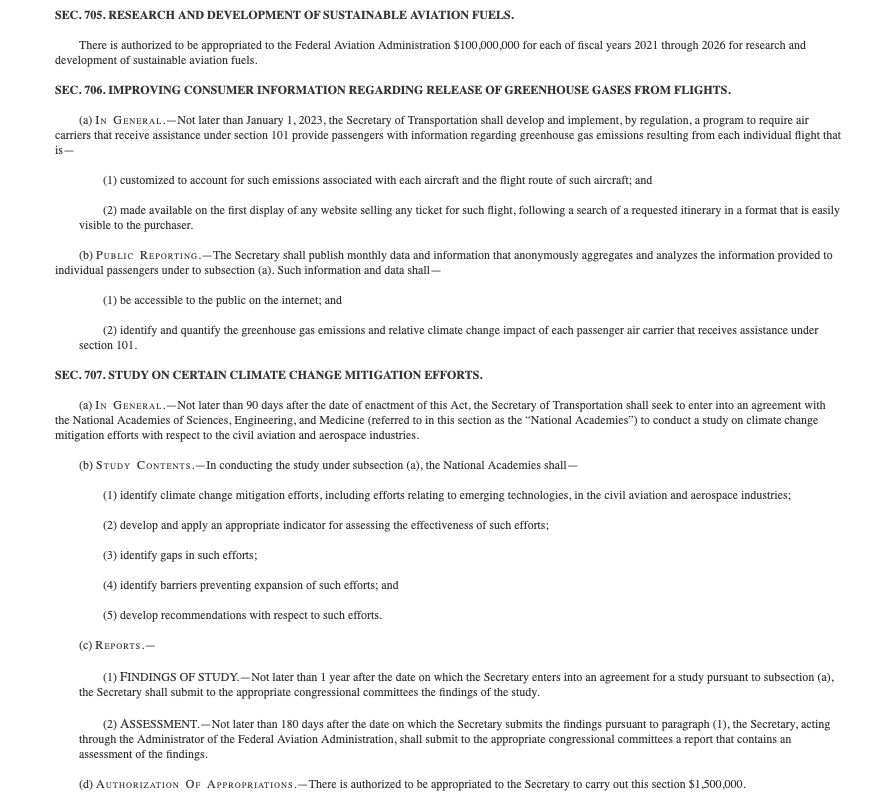 Democrats managed to smuggle in a $15/hour minimum wage into the coronavirus bill — as a “permanent requirement” on all companies receiving federal aid.

Last but not least, the coronavirus legislation has 60 pages of federal mandates for elections. Rep. Rodney Davis (R-Ill.), ranking member of the Committee on House Administration, noted that “the programs Democrats are forcing States to adopt, like early voting and no excuse absentee ballots, have been known to take some States over 5 years to successfully implement. There’s no way States would be able to follow these outrageous demands before the 2020 elections.” Worse, the bill includes a provision for ballot harvesting. The legislation enables political operatives in every state to come to a voter’s house to pick up his or her ballot and take it to the polling station.

“I fully support states who are working to expand absentee voting during this national emergency, but we should be putting safeguards into place to protect against the practice of ballot harvesting, not in support of it,” Davis said. He condemned these measures as “nothing but a dangerous ploy to federalize elections.”

“States are already working around the clock to keep their elections functioning during this national emergency. The last thing they need is for the federal government to impose unnecessary and time consuming mandates.”

In Democrats’ COVID-19 proposal, there are over 60 pages of federal mandates for elections. Now is not the time to take advantage of a national emergency to federalize our election systems.

In sum, Pelosi’s coronavirus response bill directs funds to AIDS, violence against women programs, and the Kennedy Center. It launches special-interest programs for unions and climate activists, institutes a $15/hour minimum wage and even meddles with the national elections system. Rather than a good faith effort to help Americans deal with the economic fallout of social distancing amid this crisis, Democrats have filed a bill to advance their partisan interests and take advantage of election systems.

“We’ve got families that are suffering,” Sasse said in a statement. “We’ve got small businesses that are closing literally by the hour. We have doctors fighting to prevent their hospitals from being overwhelmed. And what does Speaker Pelosi try to do? She’s trying to take hostages about her dream legislation, all sorts of dream legislative provisions that have nothing to do with this moment and say the American public can’t get access to the public health piece of legislation or the economic relief pieces of legislation unless she gets hostages that are entirely unrelated to this moment.”

“Speaker Pelosi can bring her liberal wish list to the House Floor for a vote any time she likes. Unlike most of us she controls an agenda, but she ought to have the decency to vote on her ideologically-driven wish list after this emergency legislation has been passed,” he added.

Make no mistake: these Democrats are delaying the financial assistance Americans need in order to push their pet projects. This is despicable.