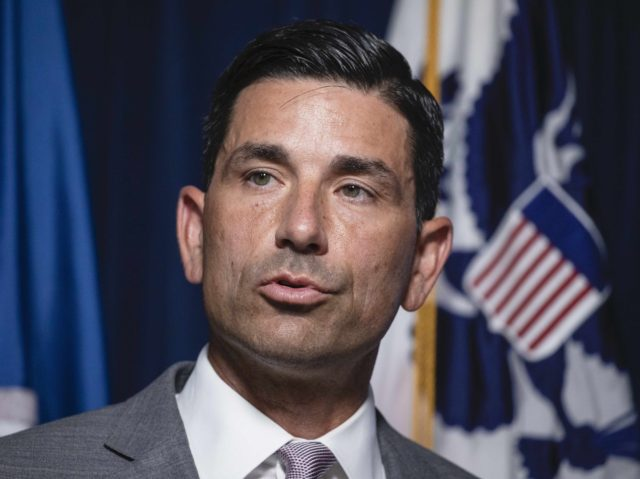 A group of left-wing protesters marched to the private home of Acting Department of Homeland Security Secretary Chad Wolf on Sunday in Alexandria, Virginia, to demonstrate against the use of federal law enforcement in Portland, Oregon.

The unusual demonstration, targeting the private residence of a Cabinet secretary, received favorable coverage in the Washington Post:

At a triangular park in a tranquil Alexandria, Va., neighborhood, a group of about 30 gathered Sunday morning and awaited directions for a disruptive mission.

They would protest the detaining and removal of demonstrators in Portland, Ore., by federal officers last week, and they would do it outside the home of acting Homeland Security Secretary Chad Wolf.

Together they went, in bicycle jerseys and tie-dyed shirts, chanting Black Lives Matter protest slogans as well as a specific message for their target. The group was mostly white people, young and old, walking uphill as the temperature climbed into the humid 90s. Some huffed and puffed behind face masks, which everyone wore to ward off the novel coronavirus.

“We are not an angry mob, are we?” shouted one speaker. “We are angry neighbors. And this man lives among us.”

Video circulated online of demonstrators pledging not to allow Wolf to live “quietly” in the neighborhood as long as the administration carried out policies with which they disagreed.

Protesters in front of acting DHS Sec. Chad Wolf’s home in Alexandria, VA. Calling for defunding police, DHS, etc. “Whose the big bad Wolf? Is one of their favorite chants. pic.twitter.com/VQgc4uEC0j

One speaker at the protest outside of Sec. Chad Wolf’s home complains how there’s no financial, career, and legal consequences for people like him. Says there must be social/political consequences: “[Wolf] lives here quietly...and we need to do something about that.” pic.twitter.com/b47dUrKFrB

Earlier on Sunday, Wolf was asked by Fox News’ Maria Bartiromo about the impending protest. He noted that federal law enforcement officials in Portland had also been “doxxed” by left-wing radicals — their personal information released online, their homes and families targeted. He said that he, and they, would do their jobs, regardless:

BARTIROMO: And right now, there are plans for a protest right outside of your home. What are you doing? What can you tell us about this other protest which is really trying to single-handedly attack you?

WOLF: Well, what I can tell you, Maria, is, our officers in Portland every night are targeted.

Their personal information is on the Internet, put out there by these criminals, by these anarchists. They’re identified. Their families are harassed. They go where they’re staying. The doxing is prolific. And we’re trying to address that.

And, of course, we see them trying to do that to myself. We will continue to do our job. We are not going to be deterred by this. This is tactic they have used for over three years, three-and-a-half years. We know what it is. We’re prepared for it.

Wolf has deployed federal officers to protect the Mark O. Hatfield U.S. Courthouse in Portland, which has been vandalized and firebombed by rioters, and which local authorities have done little to protect.