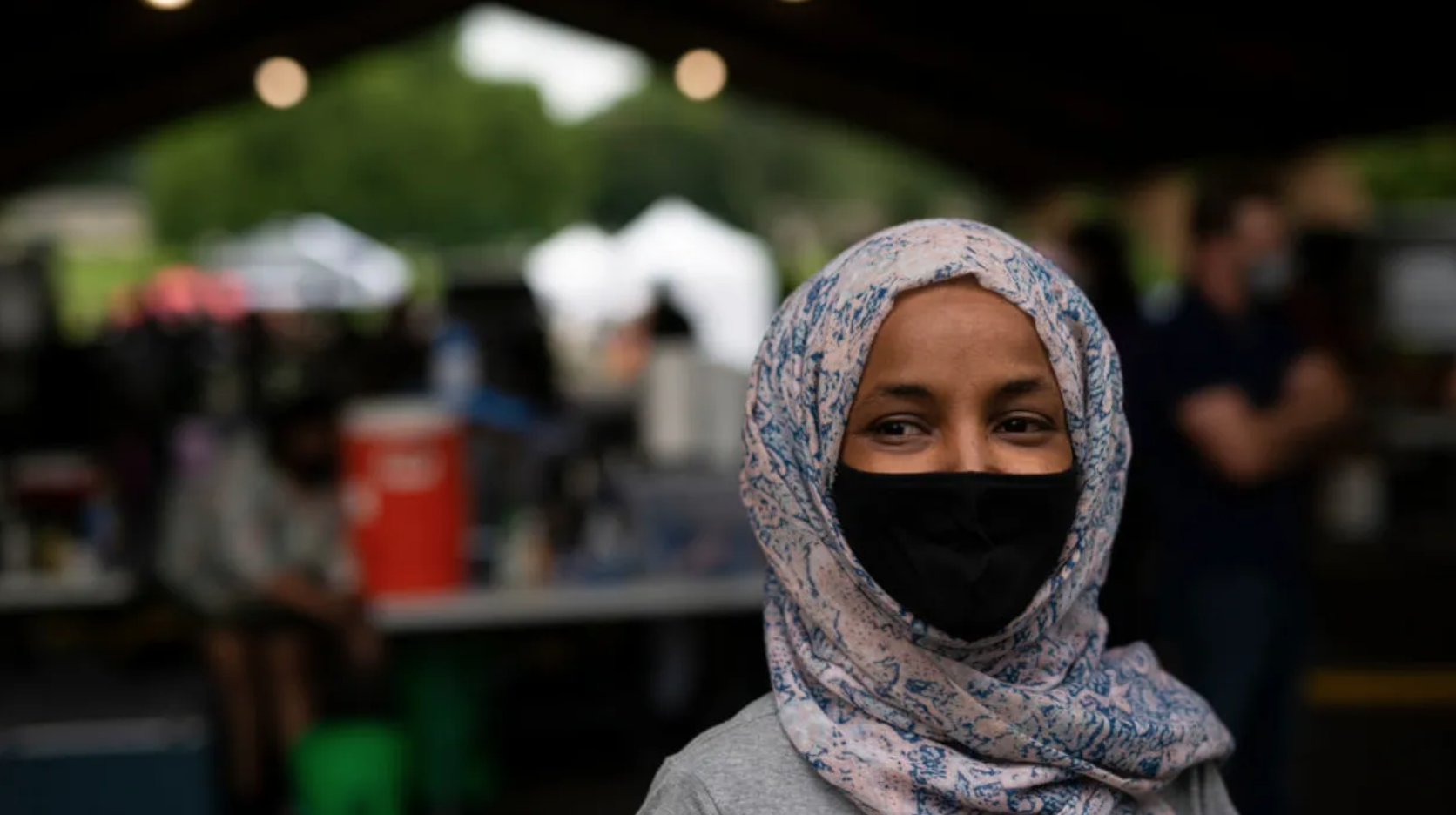 According to the media’s general judgment, 2020 U.S. voters are most concerned with purportedly complex issues of crime and justice. Voters should place no trust in this. This same media forbade itself to investigate a simple, yet objectively historic corruption scandal of national interest.

Rep. Ilhan Omar (D-MN) has almost certainly committed the most extensive spree of felonies by a congressperson in U.S. history. As a criminal, she also appears to be historically inept. Scores of verified items of evidence against her are in the public record. Omar has never challenged their authenticity and has never produced a single piece of evidence to support her version of events.

The mainstream media judges this remarkable situation to be irrelevant to Minnesota voters, let alone the dominant concern. Editorial malpractice on issues of crime, justice, and the 2020 election spreads everywhere this summer; by no coincidence, the spread can be traced to irresponsible media coverage of a deadly riot in Rep. Omar’s district.

Below are 32 new, verifiable, archived pieces of evidence of Omar’s historic crime spree.

Above: One of many Somali-language tributes to “Colonel Nur Said Elmi,” Rep. Ilhan Omar’s father, sent from around the world by family, friends, and contacts following his tragic June 2020 death from a COVID-19 infection. As a high-ranking officer in Somalia’s (U.S.-backed) military from the 1970s until 1991, he was well known by this name and title.

In mid-June, Ilhan Omar’s father tragically died from a COVID-19 infection. Expressions of grief, condolences, and prayers arrived from around the world, but particularly from the Somali-speaking immigrant community of Minneapolis and from the U.K. By all accounts, he earned his reputation as a gentle, kind neighbor, well known and beloved within Cedar-Riverside, as he had been in Somalia.

His relevance to Rep. Omar’s landmark scandal is, of course, his birth name. Upon arriving in the United States in 1995, he claimed to be “Nur Omar Mohamed” and received a Social Security number with this name. However, all appeared to know him as Nur Said. He presented himself as Nur Said. Both Ilhan and her sister Sahra Noor referred to their father as Nur Said (prior to deleting the evidence). He is identified on-screen as “Nur Said, Ilhan’s father” in the 2018 documentary film “Time for Ilhan” and again as “Nur Said” in the credits. Twice.

Just a couple months after marrying, Ilhan and her legal husband both enrolled at North Dakota State University and received federal financial aid. Married couples are not required to submit evidence of their respective parents’ assets on FAFSA applications and thus likely receive much more favorable loan terms.

Almost certainly, Rep. Omar fraudulently married her brother, a British citizen, in the service of immigration fraud, education fraud, and federal student loan fraud. Along the way, she filed at least two years of fraudulent tax returns, and possibly eight. She lived in several different subsidized housing units during this time. She likely received subsidized health care and child care during this time. For eight years, every application she signed for state and federal aid was likely fraudulent. During her 2017 divorce from Ahmed Nur Said Elmi, Ilhan submitted a nine-question statement to the court signed under penalty of perjury. Literally — she signed just below the statement of acknowledgment. Eight of her nine answers appear to be perjurious. Each instance is punishable by up to five years’ imprisonment.

The paperwork she signed for her successful 2016 run and two-year tenure as a Minnesota state representative may contain instances of perjury as well.

It appears that the media may be waiting for verifiable references to her father as “Nur Said Elmi” rather than “Nur Said.” Logically, this should not be considered necessary, considering the following:

Further, you will find the first-ever public references as to why Ilhan’s father was well known by this name. He is referred to as Colonel Nur Said Elmi, who led the U.S.-backed “54th reserve brigade in the 60th division” during the 1982 Ethiopian-Somali Border War. Colonel Nur is also said to have “led a regiment” in the 1977-1978 Ogaden War.

For the above two, a professional translation was provided by a Somali/Arabic/English translator who worked in the Middle East with U.S. military:

Col. Nur Said Elmi, do you know him? He worked in Gedo region, he became the commander of a brigade several times, the most famous brigade was called the 54th reserve brigade in the 60th division, many men who died were part of that brigade Among them was Col Shire Mohamed Siyad Barre of the 54th reserve brigade in the 60th division 1982 in the district war when the Majeerten rebels invaded with the help of Ethiopia, the 54 reserve brigade was moved from 60th division of Bay region, in Burdaale village with all their equipment, then the commander of the 54 brigade was Col. Salad Diini from Sanaag region, Col. Nur Said Elmi was a social person, very funny and all the officers liked him… May god have mercy on the soul of Col Nur Said Elmi and give the parliament member [congresswoman] Ilwan patience and faith

It was the war that happen in Balanbale district, it was commanded by Col Salad Diini from Sanaag region who was killed there, the three who held the command, and the first one who died being Col Shire Mohamed Siyaad, Col Salad Diini, and Col Nuur Said Elmi, all died, I ask god to grant them the Fardowz Heaven

Note that this is a blue-check account. He is photographed with Ilhan here (archived link), endorsing her re-election on July 16.

Friends of this account include Mohamed Nur Dhay-Lule and several key members of Ilhan’s team. Several other verifiable friends and contacts who posted condolence messages shared the text of this blue-check account (see below). Here’s the active link. Here’s the archived link.

Abdirahman Issa Kahin owns and operates Afro Deli in Minneapolis. He is well known as a friend of the family — so much so that the Minnesota Star-Tribune interviewed him for its obituary:

He held several positions in civil service in the Somali government and worked for the postal service in Minneapolis after he came to the U.S. His nicknames in Cedar-Riverside were “Colonel” and “Superdad.” Mohamed had a “huge” concept of family and was a father figure to many people in Cedar-Riverside, said Abdirahman Kahin, the owner of Afro Deli. “He was the father that everyone wanted to have,” Kahin said. “Open-minded, listening, taking your phone number.”

Note that Abdirahman Issa Kahin, like the Star-Tribune, is careful to refer to Ilhan’s father as “Nur Omar.”

However, he then referred to “Ilhan Omar, Leyla, and Sahra Nur.” Leyla, of course, is Leyla Nur Said Elmi and had attested on her marriage application that her father is “Nur Said Elmi, military officer.”

Also note the continued, transparent absurdity of the Star-Tribune’s coverage. “Colonel” is said to only be his “nickname.” And he simply worked in “civil service.”

Meanwhile, Sahan Journal — an outlet founded in 2019 by a former Star-Tribune reporter in partnership with Minnesota Public Radio — filed a much different story, putting the Star-Tribune to shame. Though it also did not mention “Nur Said Elmi,” it was the first outlet anywhere to finally confirm his former prominence in Somalia was due to his military career: 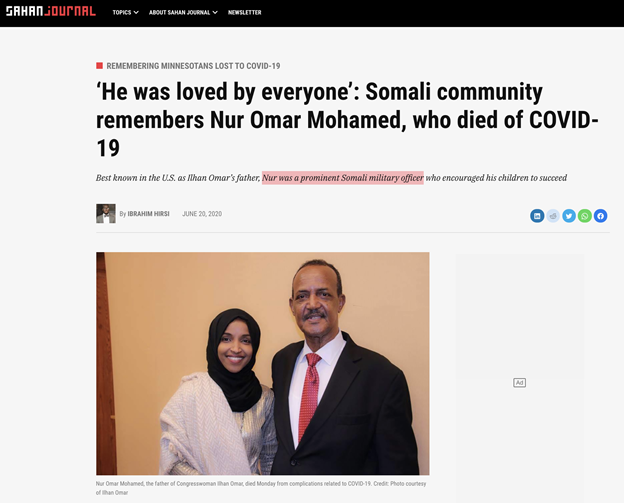 The article went on to bemoan the fact that “news stories about Nur’s death have for the most part obscured his legacy, painting him as little more than Rep. Ilhan Omar’s father. But Nur was a leader in his own right, and those who knew him well hailed him as a national treasure for Somalis at home and in the diaspora.”

Clearly, there’s an incredible amount of information worth unpacking in the Sahan Journal article. Since 2016, the Star-Tribune — and national media in general — chose to conceal this historic scandal from U.S. voters.

Their malfeasance is the only reason Rep. Omar is on the ballot this week in Minnesota. Our deadly national wave of riots began in this ill-served, media-neglected district.