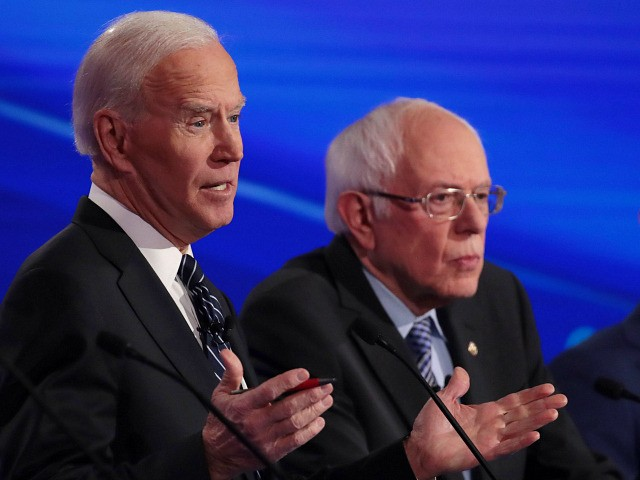 The DNC revealed over the weekend that 3,562 delegates voted to approve the platform, while a total of 1,069 voted no, and 87 abstained.

The number of convention delegates who voted no is roughly the same as the number of delegates pledged to progressive Sen. Bernie Sanders of Vermont. The populist lawmaker and “Medicare-for-all” champion was the last remaining rival to Democratic nominee Joe Biden in the primaries before suspending his White House bid and endorsing the former vice president in April.

The 2020 platform had its genesis in the six policy task forces set up this spring by Biden and Sanders. While Sanders said he would support the final platform document, hundreds of his convention delegates announced before the convention that they would vote against the platform as part of a symbolic protest.

Among the delegates who voted against the DNC’s platform was “Squad” member and freshman Rep. Rashida Tlaib (D-MI), who announced her opposition ahead of last week’s convention.

“I cast my DNC ballot and voted NO on the proposed platform,” Tlaib wrote on Twitter. “I constantly hear from constituents demanding we push for a single-payer system and away from this for-profit system that is leaving people to suffer and die just because they cannot afford health care”.

As a party, we must push for a future where every resident has the ability to thrive. That means we need a platform that works to rid our society of oppression and greed. Unfortunately, in my view this platform does not do enough. 2/2

“As a party, we must push for a future where every resident has the ability to thrive,” she added. “That means we need a platform that works to rid our society of oppression and greed. Unfortunately, in my view this platform does not do enough.”

In a statement to Fox News, Trump campaign deputy press secretary Ken Farnaso said: “Biden has already embraced socialism and it’s still not enough for the left-wing extremists in his party. This week, Americans will witness a unified Republican Party standing alongside President Trump’s America First agenda. The choice couldn’t be more clear this November.”

Revelations of the discord in the Democrat Party come as the Republican National Convention officially nominated President Donald Trump for a second term by roll call vote in Charlotte, North Carolina, on Monday afternoon.

States were limited to six delegates at the Charlotte Convention Center, 336 total for the live roll call, unlike the Democratic National Convention where the roll call was done virtually.

“The country is counting on us,” Trump said after arriving at the convention center.

“We are getting ready to see things we have never seen before,” he added, saying the 2020 election is the most important vote in U.S. history.

Vice President Mike Pence made brief comments at the convention after he was also renominated. The roll call is usually held on Tuesday but was moved up by the party’s updated schedule.

The UPI contributed to this report.