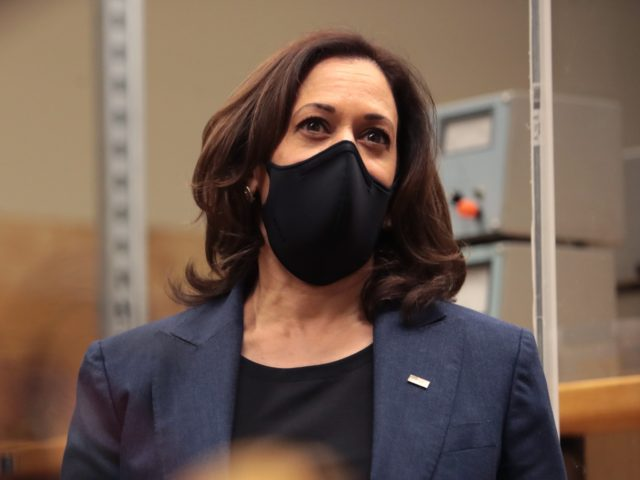 Sen. Kamala Harris (D-CA) told Jacob Blake Jr. on Monday that she is “proud of him and how he is working through his pain,” according to attorney Benjamin Crump, who represents the Blake family.

Blake was shot seven times from behind in a confrontation with Kenosha, Wisconsin, police on Aug. 23. He was wounded and paralyzed from the waist down. The incident sparked local riots, and Blake became the latest victim to be championed by the Black Lives Matter movement.

At the time of the confrontation, there was a warrant for Blake’s arrest for “third-degree sexual assault, trespassing and disorderly conduct,” according to the Associated Press. A knife was found in his car, Wisconsin authorities later revealed.

Blake Jr. spoke publicly for the first time on Saturday night, releasing a video from his hospital bed in which he spoke about pain from his injuries, adding: “Please, I’m telling you, change your lives out there.” He also appeared in court via video on Friday, pleading not guilty to the pending charges against him, which are not related to the Aug. 23 shooting. As local NBC affiliate WTMJ-TV noted:

According to a criminal complaint filed in July, Blake is accused of sexually assaulting a woman back in May. The woman told police that Blake also took her car keys and a debit card from her before fleeing. Blake was also charged with disorderly conduct – domestic abuse and criminal trespass – domestic abuse.

Harris, who is the running mate of former Vice President Joe Biden on the Democratic Party’s 2020 presidential ticket, visited with members of the Blake family on Monday as part of a visit to Milwaukee. She spoke to Blake Jr. by phone.

In a statement, Crump called Harris’s meeting with the family “inspirational and uplifting.” He noted: “In a moving moment, Jacob J. told Sen. Harris that he was proud of her, and the senator told Jacob that she was also proud of him and how he is working through his pain … Sen. Harris also discussed the policy changes that she and Vice President Biden will seek.”

Sen. @KamalaHarris met with the family of #JacobBlake today, who joined by phone from his hospital bed. The family’s legal team released the following statement about the one-hour visit. #JusticeForJacobBlake pic.twitter.com/TQ7io0Clhe

Last Thursday, Biden visited Kenosha and also visited with the Blake family, including Jacob Blake Sr. — despite the latter’s lengthy record of racism, antisemitism, and anti-Christian invective on social media. Biden called for the police officer who shot Blake, Rusten Sheskey, to be criminally charged.

The Monday before, Biden had also blamed the police, calling their actions “systemic racism.” He failed to condemn the ongoing riots until two days later, after public criticism from allies.

It was not precisely clear which members of the Blake family Harris met Monday.

Crump is representing Blake in the shooting, but not the criminal case. He has represented many key victims in the Black Lives Matter movement, and also represented the family of Trayvon Martin.