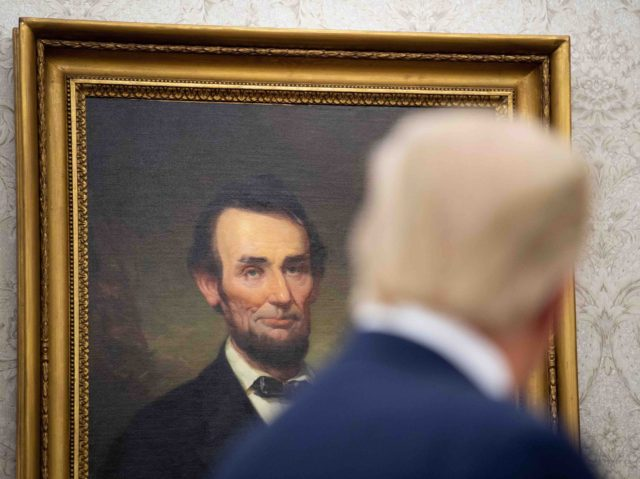 CLAIM: Abraham Lincoln declined to fill a Supreme Court seat because it was too close to the election.

VERDICT: FALSE. The Senate was out of session. He filled it — in one day — as soon as it was back.

Sen. Kamala Harris (D-CA) tried to argue in the vice presidential debate Wednesday night against the confirmation of Judge Amy Coney Barrett to fill the seat vacated by the passing of Justice Ruth Bader Ginsburg.

Harris appealed to history, arguing that Vice President Mike Pence and the Republicans are violating a precedent set by President Abraham Lincoln of not confirming a Supreme Court justice before an election.

In 1864 — one of the, I think political heroes certainly of the President, I assume of you also, Mr. Vice President, is Abraham Lincoln. Abraham Lincoln was up for re-election, and it was 27 days before the election. And a seat became open on the United States Supreme Court. Abraham Lincoln’s party was in charge, not only of the White House, but the Senate. But Honest Abe said, “It’s not the right thing to do. The American people deserve to make the decision about who will be the next president of the United States. And then that person can select who will serve for a lifetime on the highest court of our land.” And so Joe and I are very clear: the American people are voting right now, and it should be their decision about who will serve on this most important body for a lifetime.

However, Harris misrepresented what “Honest Abe” did, and why. As Dan McLaughlin of National Review noted, President Abraham Lincoln never said anything like what Harris said he did. He delayed sending a nominee to the Senate because it was out of session. McLaughlin wrote:

Lincoln, of course, said no such thing. He sent no nominee to the Senate in October 1864 because the Senate was out of session until December. He sent a nominee the day after the session began, and Salmon P. Chase was confirmed the same day. And Lincoln wanted to dangle the nomination before Chase and several other potential candidates because he wanted them to campaign for him. Lincoln’s priority was winning the election, which was necessary to win the war — and he filled the vacancy at the first possible instant.

As the Cato Institute’s resident constitutional scholar, Ilya Shapiro, noted recently (original emphasis): “[V]acancies have arisen 29 times in presidential election years, during the administrations of 22 of the 44 presidents preceding the current one, and those presidents made nominations all 29 times.”