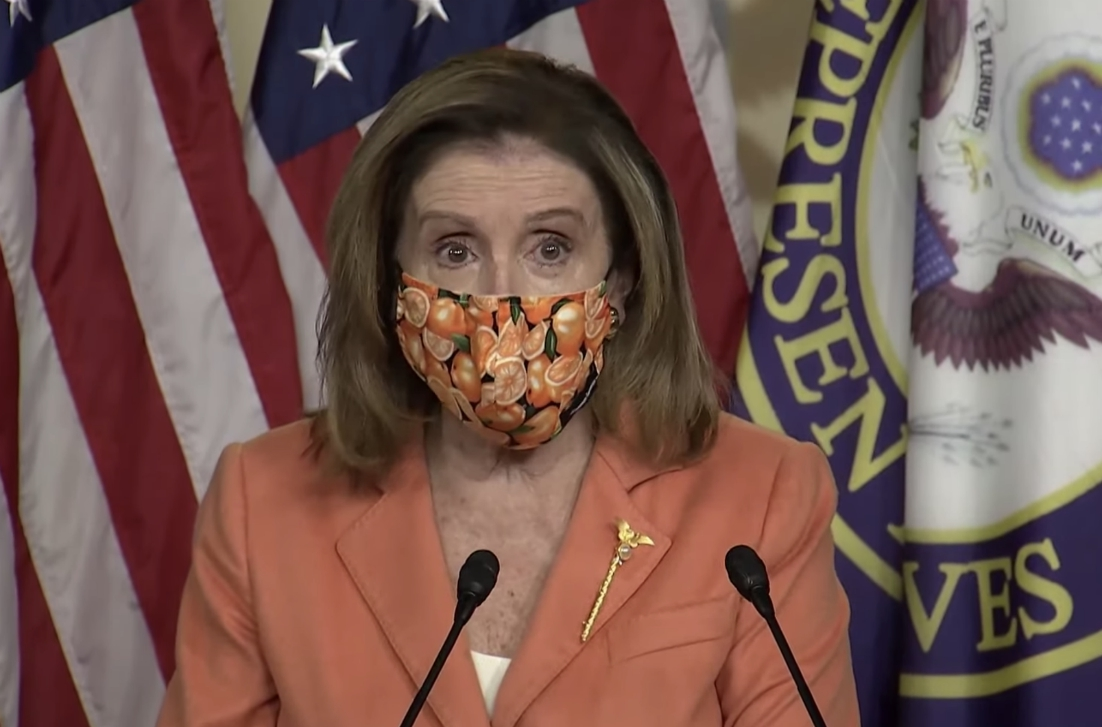 The reason why Democrats get by with treating the American people like second- and third-class citizens is that they are allowed to do so through via purposeful misreporting and outright lies occurring daily by the ‘mainstream media.’

If our press was an honest broker and reported truthfully like our founders envisioned a free press would do, Democrats would be lucky to pull 20 percent support from voters and would very likely have died off long ago like the Whig and the Bull Moose parties.

Case in point: The way the Washington-centric media lets multi-millionaire House Speaker Nancy Pelosi get away with holding the American people in contempt by blocking legislation aimed at providing additional COVID-19 financial relief.

For months, Pelosi has been able to claim the House ‘passed new coronavirus relief months ago,’ but the mean, ol’ nasty Republicans and that ogre, President Trump, ‘refuse to sign on.’

What Pelosi isn’t telling Americans – and what the garbage media refuses to tell Americans – is that her party’s bill contains some COVID-19 relief as well as a laundry list of left-wing policy objectives including hundreds of billions for bankrupt blue cities that were bankrupt, due to crappy policies, long before the pandemic, as well as taking mail-in voting and ballot harvesting (which is legalized vote theft) nationwide.

Trump and Republicans, meanwhile, have been pushing a clean relief bill – that is, one that only provides coronavirus economic relief, which is what Pelosi claims she wants but refuses to offer or agree to, making her, not Trump or the GOP, the impediment to tens of millions of ordinary folks getting new relief money.

In a letter to Democratic colleagues posted online, Pelosi alleged that the proposal is “one step forward, two steps back.”

“When the president talks about wanting a bigger relief package, his proposal appears to mean that he wants more money at his discretion to grant or withhold, rather than agreeing on language prescribing how we honor our workers, crush the virus and put money in the pockets of workers,” she said. “At this point, we still have disagreement on many priorities, and Democrats are awaiting language from the administration on several provisions as the negotiations on the overall funding amount continue.”

Those are flat-out lies and Pelosi needs to be called out on them.

Again, she’s interested in giving Americans hurting economically new relief checks only if she gets the other laundry list of Democrat priorities like bailing out blue states and cities for decades of bad fiscal management; rewarding left-wing teachers unions; and hijacking every election into the next millennia.

Trump, on the other hand, pulled out of negotiations last week because he’s tired of Pelosi’s obstinance. The Art of the Deal says you gotta know when to walk away, and it worked because Pelosi immediately began chirping about it.

How bad is Pelosi’s political posturing? So much so that former Democratic presidential contender Andrew Yang is even urging her to take the White House’s offer.

“Nancy Pelosi take this deal! Put politics aside people are hurting,” he wrote on Twitter. 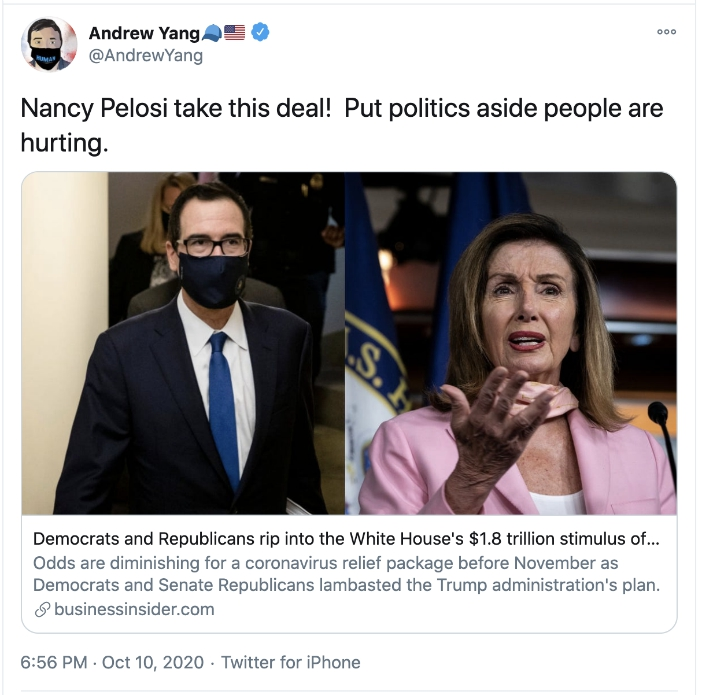