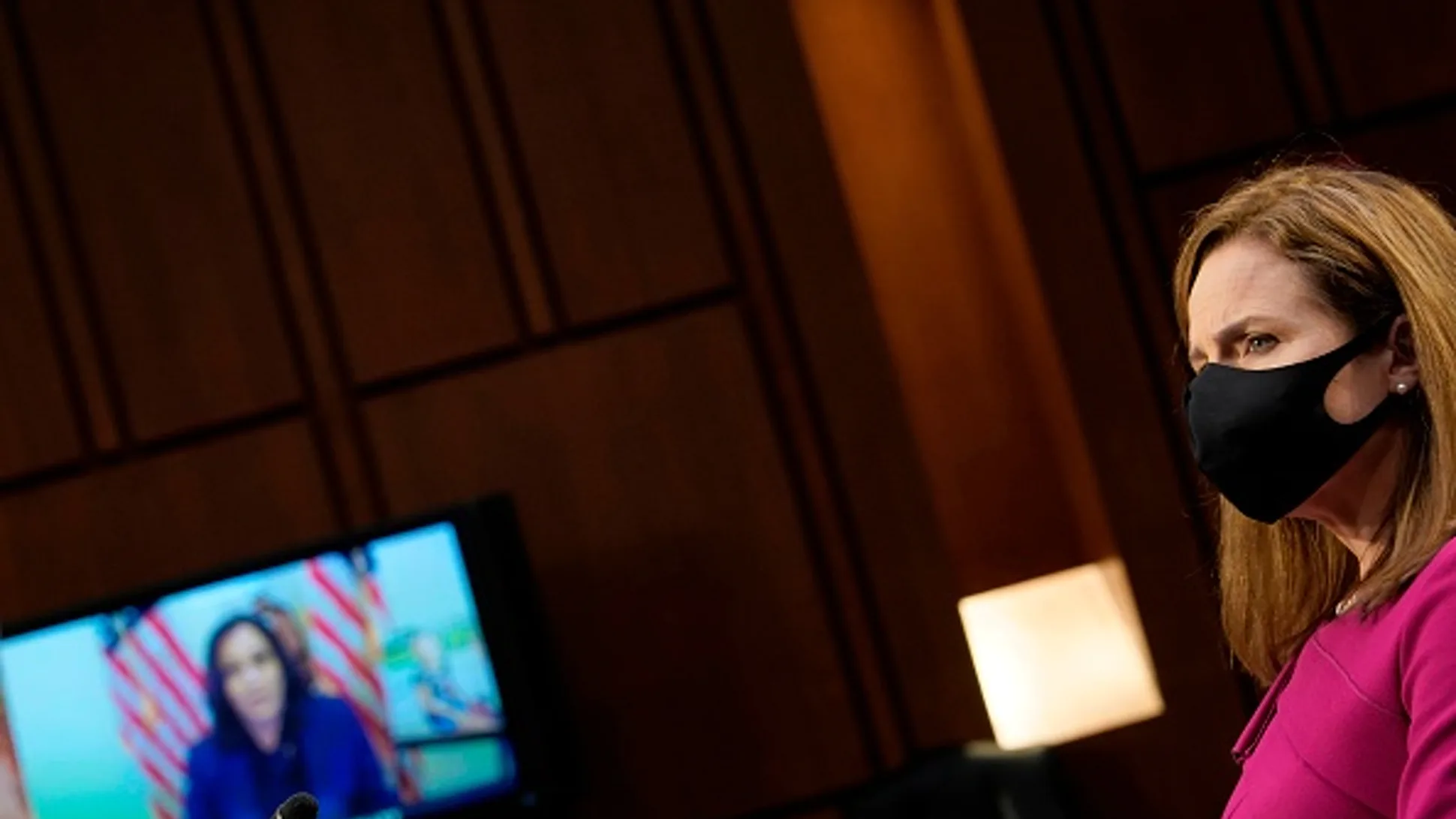 In her opening statement before the Senate Judiciary Committee on Monday over the nomination of Judge Amy Coney Barrett to the Supreme Court, Sen. Kamala Harris (D-CA) evoked the late-Justice Ruth Bader Ginsburg, fearing that her legacy could be erased.

“By replacing Justice Ruth Bader Ginsberg with someone who will undo her legacy, President Trump is attempting to roll back America’s rights for decades to come,” said Harris as a children’s book bearing Ginsburg’s image loomed behind her. “Every American must understand that with this nomination, equal justice under law is at stake. Our voting rights are at stake. Workers’ rights are at stake. Consumer rights are at stake. The right to a safe and legal abortion is at stake. Holding corporations accountable is at stake. And there is so much more.”

Harris dismissed Barrett’s nomination as little more than a cheap power grab by the Trump administration to potentially kill the Affordable Care Act and asked the chairman to delay her nomination until after the election.

“So, Mr. Chairman, I do believe this hearing is a clear attempt to jam through a supreme court nominee who will take healthcare away from millions of people during a deadly pandemic that has already killed more than 214,000 Americans,” concluded Harris. “I believe that we must listen to our constituents and protect their access to healthcare, and wait to confirm a new Supreme Court justice until after Americans decide what they want in the White House.”

Sen. Kamala Harris: "Every American must understand that with this nomination, equal justice under law is at stake" https://t.co/uScvfX9o80 pic.twitter.com/cRpV0h1fdu

Democrats have largely avoided criticizing Amy Coney Barrett’s faith, opting to leave that task to the media instead. As Harris demonstrated, the opening arguments on Monday’s hearing focused on Barrett’s apparent opposition to the Affordable Care Act. As Andrew McCarthy pointed out at National Review, however, Barrett has never once publicly criticized Obamacare as a work of policy.

“As a judge, Barrett has not ruled on Obamacare. As a scholar, she has taken the firm position that a judge’s important but modest role is to say what the law is, not to formulate public policy,” wrote McCarthy. “The best prediction of her position on legislation, therefore, is that its policy direction is for Congress to decide; the judge’s narrow role is to ensure that enacted law complies with constitutional requirements, regardless of its political or ideological bent.”

Despite Amy Coney Barrett having never said which way she would rule if Obamacare were once again taken up by the Supreme Court, Democrats have stressed that the former president’s signature work of healthcare reform now stands at risk.

“The president has promised to appoint justices who will vote to dismantle that law. As a candidate, he criticized the Supreme Court for upholding the law and said, ‘if I win the presidency, my judicial appointments will do the right thing, unlike Bush’s appointee John Roberts on ObamaCare,’” Sen. Dianne Feinstein (D-CA), the ranking Democrat on the Judiciary Committee, said in her opening statement Monday morning.