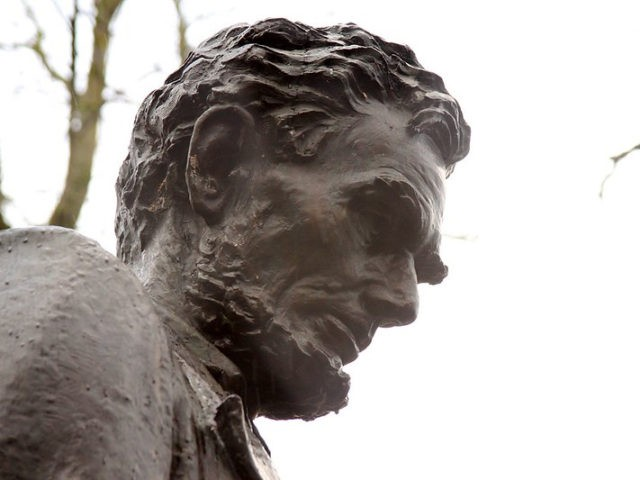 Statue being pulled down a bit ago, posted by this account, which seems to be Tracy Molina. https://t.co/h6xrGqOOtk #Portland pic.twitter.com/Z4vPsGdnht

According to OregonLive.com, the statues in the South Park Block were toppled during an “Indigenous Day of Rage.” The nearby Oregon Historical Society Museum was also reportedly attacked.

Video of the toppled statues showed they had been vandalized with the words “STOLEN LAND” spray-painted on their bases. The Roosevelt statue was also vandalized with “MURDERER.”

Right across the street lay an overturned statue. @fox12oregon pic.twitter.com/wGwsW0o6Zn

Portland Police had warned those attempting to topple statues:

A mass gathering has formed at Southwest Park Avenue and Southwest Madison Street, where some are trying to pull down a statue with a chain. To those taking part: anyone involved in criminal behavior, including vandalism, is subject to arrest or citation. (continued)

As the crowd gathered, a group threw chains on ropes on the statue, a bronze sculpture officially titled “Theodore Roosevelt, Rough Rider,” as others took a blowtorch to its base and threw red paint on the statue. They began to pull until the statue rocked from side to side before falling down at 8:51 p.m.

The group then turned to the nearby Abraham Lincoln statue, pulling it to the ground at 8:59 p.m. Spray-painted on the base of the statue was “Dakota 38,” a reference to 38 Dakota men executed after the Dakota-U.S. War of 1862, the largest mass execution in a single day in American history.

The crowd then moved through downtown, breaking windows and destroying a sign at the Portland State University Campus Public Safety office and other buildings.

Police did not apparently intervene in time to save the statues or protect the museum.

The protest appeared timed for the eve of Columbus Day, which is observed in some parts of the U.S. on Monday.