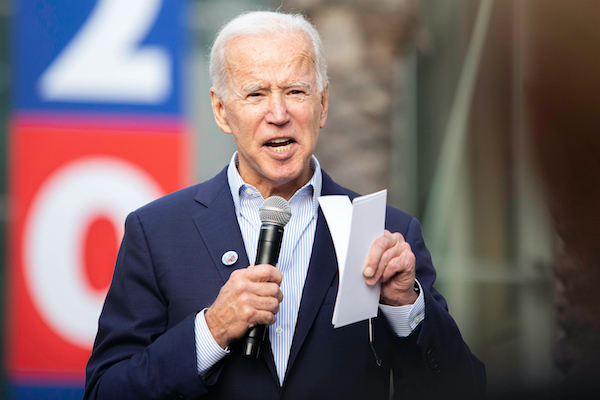 The Biden campaign responded to the bombshell report on Hunter Biden on Wednesday after the New York Post outlined how former Vice President Joe Biden allegedly met with a top executive at Ukrainian natural gas firm Burisma Holdings in 2015. The meeting was set up by Hunter Biden.

The report claims that an Apple MacBook Pro that belonged to Hunter Biden was turned over to the FBI in December by a computer repair shop owner.

The Biden campaign referred to “Joe Biden’s official schedules” and said that no such meeting took place. The campaign however, failed to deny the validity of the emails found on Hunter Biden’s hard drive.

“Investigations by the press, during impeachment, and even by two Republican-led Senate committees whose work was decried as ‘not legitimate’ and political by a GOP colleague have all reached the same conclusion: that Joe Biden carried out official U.S. policy toward Ukraine and engaged in no wrongdoing. Trump Administration officials have attested to these facts under oath,” said Biden campaign spokesman Andrew Bates in a statement.

“The New York Post never asked the Biden campaign about the critical elements of this story,” Bates added. “They certainly never raised that Rudy Giuliani - whose discredited conspiracy theories and alliance with figures connected to Russian intelligence have been widely reported - claimed to have such materials.”

Bates continued: “Moreover, we have reviewed Joe Biden’s official schedules from the time and no meeting, as alleged by the New York Post, ever took place.”

The damning emails found on Hunter Biden’s hard drive paint a much different picture than what the Biden campaign is portraying. One email from Burisma adviser Vadym Pozharskyi, thanked Hunter Biden for the “opportunity to meet your father and spent [sic] some time together” in Washington, D.C.

Just one year later in March of 2016, Vice President Biden pressured Ukraine into firing their top prosecutor who was investigating Burisma.

Check out what Breitbart reports:

Joe Biden has denied speaking with his son about his foreign business — a claim his son has contradicted.

The new evidence comes from an abandoned laptop that was left at a Delaware repair shop and seized by the FBI on Dec. 17, 2019 — the day before Speaker of the House Nancy Pelosi (D-CA) held the vote to impeach President Donald Trump.

The store owner had contacted the FBI, but made copy of the hard drive before yielding it. He later provided that copy to Robert Costello, an attorney for former NewYork City Mayor Rudy Giuliani, who is an attorney for the president, thePost reported.

The Post also noted that other materials, including family photographs, support the laptop’s relationship to Hunter Biden.

The issue of Joe Biden’s intervention in Ukraine — and his conflict of interest — was crucial to the impeachment.

President Trump had asked Ukrainian President Volodymyr Zelensky to look into allegations concerning “Biden’s son.” He was then impeached, based on a letter from a “whistleblower” who had not actually heard the call between Trump and Zelensky.

The president claimed he had been acting in the national interest; Democrats alleged he had abused his power to smear a rival.

It is not clear why the FBI never released or acted on the evidence it reportedly seized, which supported Trump’s case.

During the Senate impeachment trial earlier this year, Republicans suggested that they would allow the White House to call Hunter Biden and perhaps Joe Biden as witnesses if Democrats insisted on calling more witnesses than the House had seen.

Hunter Biden was appointed to the board of Burisma in 2014, a conflict of interest that briefly prompted reporters to raise questions with the Obama administration at the time. The impeachment inquiry revealed that other federal officials tried to raised the issue, without success.

A report released by Senate Republicans earlier this year noted suggested that Joe Biden may have lied about discussing his son’s business dealings and about being warned about a potential conflict of interest.

Critics have accused Joe Biden of using his office to provide business opportunities for his family, which he has steadfastly denied.

Hunter Biden made an appearance at the 2020 Democratic National Convention, vouching for his father’s honesty.