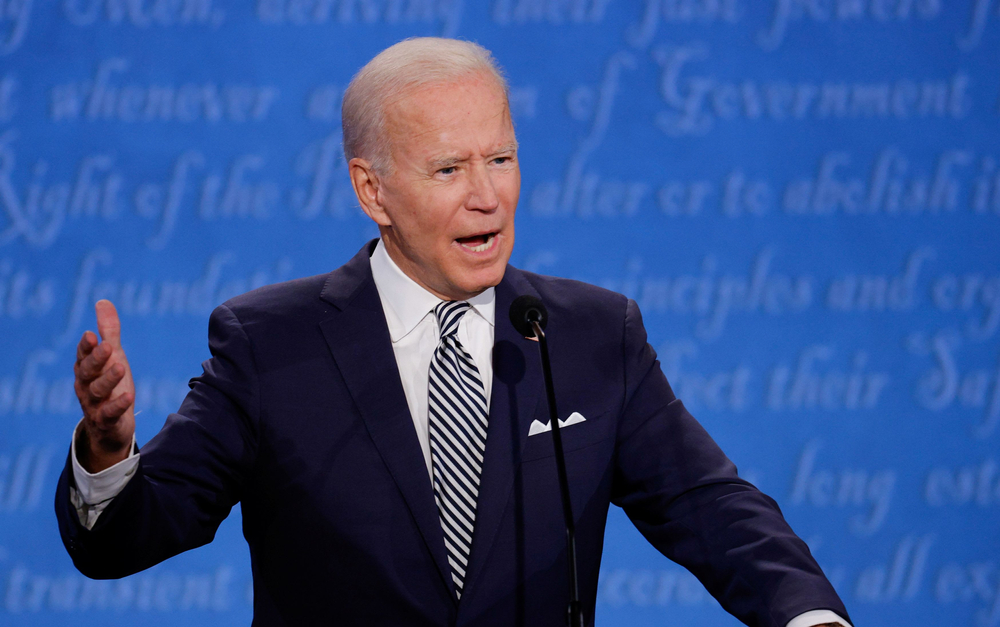 The Democrat war on Thanksgiving was joined by former Vice President Joe Biden who remains in limbo while legal matters over the election are sorted out.

Good old Joe from Scranton may have been crowned by the media but much remains to be decided by the courts and election officials and his installation as the nation’s 46th president is far from the slam-dunk that it has been portrayed as by the paid liars.

While he waits for President Trump to concede, Biden is whiling away the time whining that “Orange Man Bad” is holding up his transition team and preaching the same COVID apocalyptic doom that fueled his campaign.

On Monday, lunchbucket Joe joined Dr. Anthony Fauci and other authoritarian Democrat officials in calling for Americans to roll back -if not cancel - their traditional holiday Thanksgiving dinner plans.

Biden made his comments at a Wilmington, Delaware economic briefing where the creepy globalist Green New Deal slogan of “Build Back Better” was festooned on signs across the stage.

Joe Biden says that he would "strongly urge" people to have a "maximum of ten people, socially distanced, wearing masks" in their home for Thanksgiving. pic.twitter.com/2ChBYBnrXd

Former Vice President Joe Biden suggested that Americans limit their gatherings on Thanksgiving and adhere to coronavirus protocols in their private residences, citing experts who, according to the former vice president, recommend gatherings of “five people, maximum ten people” who are “socially distanced, wearing masks.”

Biden, whom the media have declared president-elect, detailed his view on holiday gatherings during a Monday press conference in Wilmington, Delaware, urging Americans to adhere to the advice of “health experts.”

“What is your message to people who are considering, for example, getting together with their families and others for Thanksgiving? Would you urge people to reconsider their plans?” a reporter asked.

“Here’s what I would do. Let me tell you what health experts have said to me,” Biden began.

“They strongly urge that, if, in fact, we’re going to have Thanksgiving with anyone, that we limit it to maximum, maximum, they suggest five people, maximum 10 people, socially distanced, wearing masks, and people who have quarantined,” he explained.

Biden said he has been discussing how his own family will handle Thanksgiving this year and told reporters that they have successfully “narrowed down which family members” will attend, adding, “and that they were tested, recently tested within 24 hours.”

He then urged the American people to “think about this” before gathering for Thanksgiving.

“I would strongly urge for the sake — not just your sake, for the sake of your children, your mother, your father, your sisters, your brothers, whoever you get together at Thanksgiving — think about this,” he said, stressing that Americans should limit their holiday gatherings to ten people.

“There should be no group more than ten people in one room at one time. I mean, inside the home. That’s what they’re telling me. They’re telling me, making sure that that’s the case,” he said before emphasizing his belief in the importance of masks.

The nation’s top Democrat also doubled-down on his mask fetish, calling for those who do partake in the traditional holiday gathering to wear face diapers, yet another sign that if he is installed into the White House that a national mask mandate will be quickly imposed.

The call for such un-American intrusions on freedom comes as Michigan Governor Gretchen Whitmer has just ordered another lockdown and Oregon Governor Kate Brown has threatened to arrest those who defy her decree limiting the size of turkey day family gatherings.

Biden’s Thanksgiving dinner protocols are a harrowing preview of the sort of sweeping control over their lives that will be wielded by Democrats who are gearing up to supercharge the nanny state and put some teeth into it through state power.