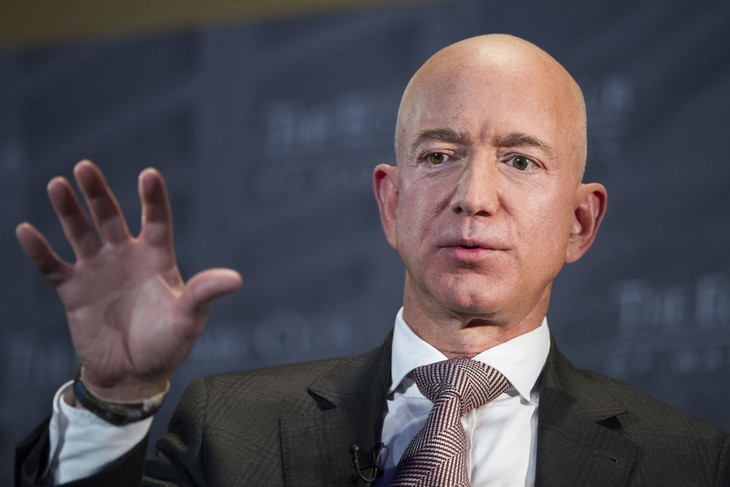 Amazon’s charity donation program AmazonSmile already excludes conservative and Christian organizations, relying on the scandal-plagued far-left smear factory the Southern Poverty Law Center (SPLC) to brand them “hate groups.” This is not enough for some activists, however. Just before Christmas, the British leftist group openDemocracy publicly attacked Amazon for allowing Christian nonprofits like the Billy Graham Evangelistic Association (BGEA) and Focus on the Family to use its AmazonSmile charity donation program.

It seems Amazon’s shameful reliance on the SPLC is not enough for openDemocracy — the group wants AmazonSmile to exclude even more Christian charities because they oppose LGBT activism.

The openDemocracy “report” notes Amazon’s near-50 percent rise in profits during the COVID-19 pandemic and Amazon CEO Jeff Bezos’ open support for the LGBT movement and the many awards he has received for it. Yet all is not well in Amazonia: “Dozens of US-based anti-LGBT groups are fundraising on Amazon’s online donations platform – despite the company’s policies against discrimination based on sexual orientation – a new investigation from openDemocracy reveals today.”

A leftist group has found “hate” in the AmazonSmile program — cue the hysteria!

Forces on the Left have weaponized the terms “intolerance” and “discrimination.” It seems openDemocracy considers any statement to the right of the Human Rights Campaign some form of “intolerance” or “discrimination.” If a charity doesn’t hoist rainbow flags on its building, march in Pride parades, and openly advocate for same-sex marriage, it must be an anti-LGBT hate group, right?

The British group claimed to have discovered “more than 40” groups in the AmazonSmile program that “publicly oppose LGBT rights and equality.” These organizations have opposed same-sex marriage and “anti-discrimination laws,” warned against homosexuality and same-sex marriage, attacked TV shows for pushing LGBT activism, claimed that COVID-19 is God’s punishment for LGBT activism, and ordered staff members not to support same-sex marriage. While openDemocracy framed these policies in the worst possible light, most of these stances fall in line with mainstream Christian doctrine. (The COVID-19 claim is beyond the pale and conflicts with Luke 13:1-5 and John 9:1-3.)

The openDemocracy report does not name the 40 organizations, but it does mention a few of them, including Human Life International (HLI), the American Center for Law and Justice (ACLJ), the Billy Graham Evangelistic Association (BGEA), partners of the World Congress of Families, a state affiliate of the American Family Association (AFA), and Focus on the Family.

The report notes that AmazonSmile excluded them … because the SPLC brands them as “anti-LGBT hate groups.” As I have explained at PJ Media, the SPLC’s “hate group” accusation against ADF and FRC is false and relies on false claims against these groups. openDemocracy notes that groups with similar “anti-LGBT track records” remain on AmazonSmile, which makes sense because neither ADF and FRC nor these other organizations are truly hate groups.

The report attacks HLI for opposing the LGBT movement and for supporting anti-abortion projects that abortion activists claim spread “misinformation.” The report attacks ACLJ for supporting a ban on certain forms of abortion and for opposing same-sex marriage. It attacks Franklin Graham, a monumental evangelical leader who serves as president of the global relief charity Samaritan’s Purse and president of the BGEA, for attacking Islam and same-sex marriage.

“Of the more than 40 anti-LGBT groups that openDemocracy discovered on the platform, eight have been partners of the controversial World Congress of Families (WCF) network – which is also described by the SPLC as an ‘anti-LGBT hate group,’” the report notes. openDemocracy also found AFA of Indiana, a state affiliate of the SPLC-accused “hate group” the American Family Association, on AmazonSmile.

openDemocracy also noted that the SPLC has attacked Focus on the Family, a Christian organization on AmazonSmile. The SPLC condemned Focus as one of “a dozen groups [that] help drive the religious right’s anti-gay crusade.”

The British group sent Amazon a “dossier of research into the anti-LGBT activities and statements of more than 40 groups listed on the US platform – and asked if the company would investigate if they had broken their Participation Agreement.”

In response, an Amazon spokesperson reiterated the policy, noting that “organistions that engage in, support, encourage, or promote intolerance, hate, terrorism, violence, money laundering, or other illegal activities are not eligible. If at any point an organisation violates this agreement, its eligibility will be revoked.” The spokesperson also noted that Amazon has used the SPLC to screen organizations from the program since 2013.

As I explained in my book Making Hate Pay: The Corruption of the Southern Poverty Law Center, the SPLC has leveraged its history in bankrupting white supremacist groups like the Ku Klux Klan to brand its ideological opponents as “hate groups” and to raise millions through fearmongering about their influence. Many of the “hate groups” on the SPLC’s list barely exist at all, and many more have found themselves demonized for opposing the SPLC’s leftist ideology.

Conservative and Christian groups have found themselves on a list with the KKK because they defend biblical sexuality, oppose illegal immigration, and warn about the threat of radical Islamist terrorism. Even fellow liberals have condemned the SPLC’s “anti-LGBT hate group” accusation against ADF.

The SPLC’s accusations have serious consequences. A deranged man attempted to kill everyone at FRC in 2012 because of the SPLC’s “hate group” accusation. The SPLC condemned the shooter but continues to brand FRC a “hate group.”

Last year, the SPLC fired its co-founder, had its president step down, and had a prominent member of the board distance herself. The scandal broke out due to accusations of (decades-old) racial discrimination and sexual harassment. Amid the scandal, former employees came forward to expose the “con” of exaggerating hate to bilk donors.

While openDemocracy notes that ADF, FRC, and AFA have “contested” the SPLC’s “hate group” accusation, it did not mention any of the SPLC’s scandals.

It should come as no surprise that leftist groups like openDemocracy would weaponize terms like “intolerance” and “discrimination” just as the SPLC weaponizes the term “hate group.”

Christian organizations must be able to follow biblical morality and advocate for it in the public square. The Bible clearly condemns homosexual activity as sinful and defines marriage as between one man and one woman. If it is “intolerance” or “discrimination” for a Christian group to fire employees who oppose the organization’s mission, would it be “intolerance” or “discrimination” for an LGBT group to fire an employee who declares that homosexual activity is sinful?

What of the SPLC’s intolerance for organizations that dare oppose its far-left agenda?

The openDemocracy report quoted a human rights activist who urged Amazon to remove Christian organizations from its platform because they are working against alleged “rights.”

“Companies, if they really walk the talk, shouldn’t be giving their platform to organisations that are working to limit the rights of other people,” Evelyne Paradis, executive director of the LGBT advocacy group ILGA-Europe, told openDemocracy. She argued for the exclusion of any group “that is actively fuelling hatred and/or working against the rights of other people.”

Again, this rhetoric reveals the weaponization of basic terms. Activists often frame their advocacy in terms of “rights.” Many of these “rights” end up in direct conflict, such as a woman’s alleged “right” to abortion and an unborn baby’s right to life. LGBT people should have the right to be treated just like anyone else in the marketplace, for example, but that does not mean governments must trample on the religious freedom rights of organizations to operate according to their beliefs.

When openDemocracy accuses Christian groups of working to undermine LGBT people’s “rights,” it is demonizing these groups for daring to express their convictions in the public square. What openDemocracy describes as efforts opposing “anti-discrimination laws” often amounts to support for religious freedom protections.

Governments have used such “anti-discrimination laws” to penalize Christians like baker Jack Phillips and florist Barronelle Stutzman. Phillips and Stutzman gladly serve all people, including LGBT people, but they refused to use their artistic talents to celebrate a same-sex wedding since they believe that marriage is between one man and one woman. State agencies in Colorado and Washington State ruled that they had discriminated on the basis of sexual orientation. The Supreme Court ruled that Colorado discriminated against Phillips and ADF has asked the Court to take up Stutzman’s case once again.

A BGEA representative said the group is “grateful to participate in the Amazon Smile program” and that it “does not engage in unlawful discrimination and we do not promote intolerance.”

“We hope Amazon Smile will continue to respect the rights and dignity of all people, and won’t discriminate against faith-based groups based solely on their sincerely held religious beliefs,” the representative concluded. Perhaps he should have said he hopes AmazonSmile will stop discriminating against faith-based groups due to their sincerely-held religious beliefs. How else does AmazonSmile excuse the SPLC’s false (and dangerous) smears against ADF and FRC?