Alyssa Milano: A Mask Will Protect You More Than an AR-15 Will 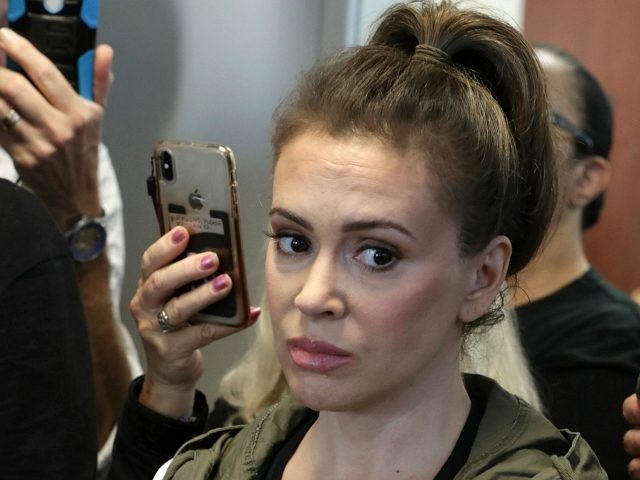 Actress Alyssa Milano said that people who merely disagree with mask mandates or the efficacy of them are the same people who “think they need an AR-15 for ‘”protection.’”

“Anti-maskers are the same people who think they need an AR-15 for “protection”. LOUDER FOR THE PEOPLE IN THE BACK: A MASK WILL PROTECT YOU MORE THAN AN AR-15 WILL,” Milano.

Anti-maskers are the same people who think they need an AR-15 for “protection”.

LOUDER FOR THE PEOPLE IN THE BACK: A MASK WILL PROTECT YOU *MORE* THAN AN AR-15 WILL.

Alyssa Milano’s claims disregard the fact that Americans have used AR-15s for self-defense, i.e., “protection,” numerous times in recent years. And in many of those situations, an AR-15 allowed an outnumbered, would-be victim, to fend off an attack from multiple suspects.

For example, on March 28, 2017, Breitbart News reported that a Broken Arrow, Oklahoma homeowner’s son used an AR-15 to defend his life against three home intruders. The 23-year-old son was asleep when intruders entered the house and awoke to the noises they made. He retrieved an AR-15 and shot at the suspects as they walked in the hall, stopping the invasion and saving his life.

On July 11, 2019, Ocala.com reported that a homeowner used an AR-15 to defend himself against four home intruders, at least some of which were armed and at least one of whom was wearing a “Jason” mask. Although outnumbered, the homeowner foiled the invasion by shooting and killing two of the four invaders and causing the other two to flee.

On November 4, 2019, NBC News reported that a pregnant Florida woman used an AR-15 to fend off two home intruders. She grabbed the AR-15 after two invaders entered her home and began pistol whipping her husband. Both invaders fled after she opened fire, and one of the suspects collapsed in a nearby ditch and died.

The instances in which law-abiding citizens protect themselves with AR-15s, again, are myriad. There are mask mandates that have been enacted for months in response to the coronavirus, in states like California, what are still facing calamitous COVID-19 case spikes, overrun hospitals, medical staff shortages, again, despite the masks mandates, lockdown, and other restrictions on people’s movements.

Milano’s claims also ignore the fact that Hollywood leftists regularly attend events where AR-15s and/or M4s — both of which are AR variants — are used to keep celebrities safe.

On January 11, 2016, Breitbart News noted that anti-gun Hollywood availed itself of good guys with guns to protect the celebrities in attendance at the 73rd annual Golden Globe awards. Photos from the event showed AR-15s and/or M4s were among the guns carried in order to offer protection.

When the 2017 Golden Globes took place, SWAT teams, the FBI, and others who carry AR-15s and/or M4s were all present to protect the celebrities, and the protection level has only increased in the years since.