The double standards in media and tech are so obvious and in our face lately. They do not care that you know. They will tell you that their unfairness IS fairness. War is peace. Freedom is slavery. Elites are your friends.

They’ll say anything and do anything. Just one example? Jon Ossoff in Georgia. The so-called press and the tech giants are doing everything they can to make him and Warner the winners and turn the senate over to democrats. That’s why they’re stealing the vote right in front of our faces, and it’s why blatant propaganda doesn’t just go unpunished, but is actively coordinated with all parties.

Look at this outright lie. 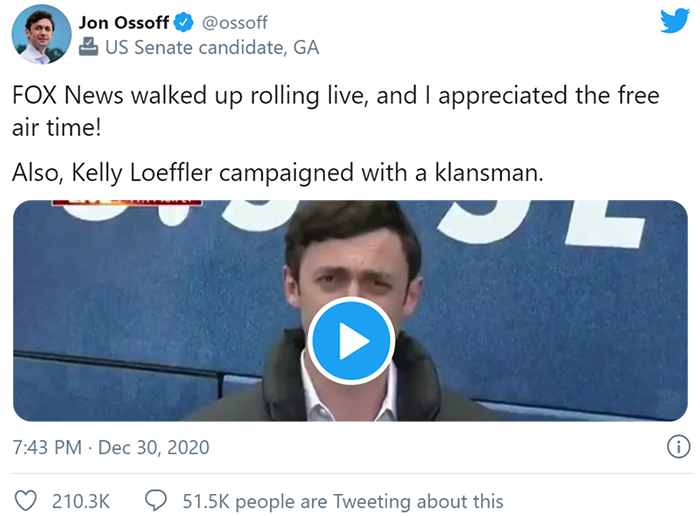 “Kelly had no idea who that was, and if she had she would have kicked him out immediately because we condemn in the most vociferous terms everything that he stands for,” Loeffler’s campaign spokesman Stephen Lawson previously told the AJC regarding the photograph.

“It’s not surprising coming from a pathological liar like Jon Ossoff whose parents still pay his rent,” Lawson said.

Do you see that she wasn’t campaigning with this guy? He was just a rando in a picture at an event. That means OSSOFF IS LYING.

But the Daily Caller asked Twitter what they were doing to do about it, and Twitter said “not a thang.”

Twitter spokesman Trenton Kennedy told the DCNF that the tweet does not fit under any of Twitter’s three policies for misleading information: “synthetic and manipulated media, COVID-19, and Civic Integrity.”

Kennedy said he did not even have Twitter teams review the Ossoff tweet due to the busyness of the holiday season. He explained to the DCNF that though the civic integrity category deals with elections, “making a claim about someone happens in political speech all the time.”

“Making a claim about someone and their character wouldn’t fall under any of those policies,” Kennedy said.

IT’S A LIE ABOUT A CAMPAIGN NOT A COMMENTARY ABOUT HOW UGLY SOMEONE IS. And they KICKED THE NEW YORK POST OFF TWITTER OVER THE HUNTER BIDEN STORY. Now they claim they aren’t the “arbiter of truth?” This is a SCAM.

Trenton Kennedy knows that you know. That comment was MEANT to piss off the Daily Caller and YOU. Twitter is giving you the middle finger.

You may be all the way to Parler now, but that doesn’t mean they don’t deserve a middle finger in return.