“This Is An Emergency”: Pelosi Calls For 25th Amendment To Be Invoked On Trump, Says Congress Prepared To Proceed With Impeachment

Nancy Pelosi has joined Chuck Schumer in calling for 25th Amendment to remove Trump who “incited an armed insurrection against America.”

Speaking at the same time as Joe Biden, who was revealing more members of his cabinet, and revealilng just how much respect she has for the president elect, Pelosi said that “If the vice president and the cabinet do not act the congress may be prepared to move forward with impeachment,” she says during a press conference.

“Yesterday the president of the United States incited an armed insurrection against America,” she said adding that “in calling for this seditious act, the president has committed an unspeakable assault on our nation.”

BREAKING: Nancy Pelosi calls for the 25th Amendment to be invoked by Mike Pence to remove Donald Trump from office.

She says Congress is prepared to proceed with impeachment if it is not https://t.co/FSUmVKeupb pic.twitter.com/Tu8lKEiHmw

Pelosi also called Trump a “very dangerous person”, said that “this is an emergency of the highest magnitude” and added that “our Democracy is at risk if action is ignored.”

House Speaker Pelosi calls President Trump "a very dangerous person who should not continue in office."

She asks Sec. of State Pompeo and Treasury Sec. Mnuchin why they won't invoke the 25th Amendment: "Is it about success in business later?" pic.twitter.com/zBmh0hJkfl

She concluded that if the 25th amendment is not invoked my Mike Pence, Congress is prepared to proceed with impeachment.

New articles of impeachment against President Trump introduced by Rep. David Cicilline seek not only to remove him from office for the very short remainder of his term - they would block him from ever running for office again.

According to the articles, President Trump’s insistence that he won the election by a “landslide” and other statements “encouraged - and foreseeably resulted in - imminent lawless action at the Capitol” on Wednesday.

Trump’s behavior “warrants impeachment and trial, removal from office, and disqualification to hold and enjoy any office of honor, trust, or profit under the United States.”

Worth noting: They seek not only to remove Trump from office, but also to bar him from ever running again.

Chuck Schumer, the top Senate Democrat, and incoming Senate majority leader after the Dems victory in the Georgia runoffs, called for Donald Trump to be immediately removed from office, saying that the outgoing president was directly responsible for Wednesday’s riot in the Capitol.

In a statement, Schumer said Vice President Mike Pence should invoke the Constitution’s 25th amendment, using support of the cabinet to take over in the Oval Office until Joe Biden is inaugurated on January 20. 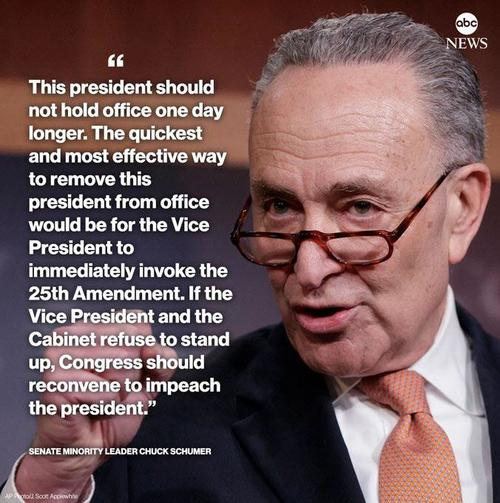 “What happened at the US Capitol yesterday was an insurrection against the United States, incited by the president,” said Schumer. “This president should not hold office one day longer.”

“If the vice president and the Cabinet refuse to stand up, Congress should reconvene to impeach the president,” Schumer added.

The quickest and most effective way—it can be done today—to remove this president from office would be for the Vice President to immediately invoke the 25th amendment.

If the Vice President and the Cabinet refuse to stand up, Congress must reconvene to impeach President Trump.

And indicating that this is not just a frivolous tweet by Schumer, and that Democrats plan on pushing for this until completion, Nancy Pelosi is holding a 1pm presser in which we expect the topic of Trump’s prompt removal to be the main topic of discussion.