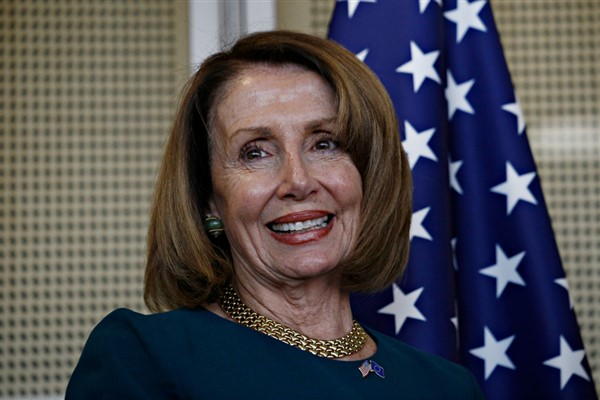 Nancy Pelosi’s pathological hatred for President Trump has reached the stage where the spiteful speaker would expose the nation to a biological or nuclear attack on the nation.

In a horrific escalation of her frenzied efforts to remove Trump from office before his term officially expires next week, Madame Speaker went to the military brass to demand that the POTUS be stripped of his ability to respond to a potential attack from enemies intent on destroying America.

In the unprecedented move, the octogenarian Democrat went to Joint Chiefs Of Staff Chairman Gen. Mark Milley to ask that he tie the commander in chief’s hands in order to prevent him from utilizing the nuclear launch codes, a bit of news that was likely greeted with great interest by our adversaries in Moscow and Tehran.

“This morning, I spoke to the Chairman of the Joint Chiefs of Staff Mark Milley to discuss available precautions for preventing an unstable president from initiating military hostilities or accessing the launch codes and ordering a nuclear strike”

It was a stunning admission that in normal times and in a nation with a functional media would bring serious questions as to Pelosi’s own sanity and agenda.

House Speaker Nancy Pelosi said in a letter to members on Friday that she's spoken to the Joint Chiefs of Staff Chairman Mark Milley about blocking an "unhinged" Trump from accessing the nuclear codes.https://t.co/LlB6MTdjbk

Via The Military Times:

Amid unprecedented turmoil among the nation’s political leaders, House Speaker Nancy Pelosi on Friday asked the Joint Chiefs chairman to keep an “unstable” President Donald Trump from launching America into surprise military hostilities in his final days in office.

“The situation of this unhinged president could not be more dangerous, and we must do everything that we can to protect the American people from his unbalanced assault on our country and our democracy,” Pelosi wrote in a letter to House Democrats.

She specifically referenced America’s nuclear arsenal, and added that “if the president does not leave office imminently and willingly, the Congress will proceed with our action” to impeach him.

The Associated Press reported that Pelosi told fellow lawmakers that top Pentagon officials assured her steps are in place to prevent a nuclear launch under Trump’s orders. However, Col. Dave Butler, spokesman for Army Gen. Mark Milley, said only of the call between the two leaders that “he answered her questions regarding the process of nuclear command authority.”

It’s unclear what Milley or any uniformed military leader could do to intervene in such a scenario without breaking the established military chain of command, which falls under Trump as commander in chief.

On Tuesday, during a roundtable with reporters, Adm. Charles Richard, head of U.S. Strategic Command, said that if ordered to execute a nuclear strike — even late in a presidency — that “I will follow any legal order that I am given, I will not follow any illegal orders. If you were to go much further, we’re starting to call in civilian control of the military, which I think is a prized American attribute.”

Pelosi’s dangerous politicizing of the military to strike a blow against Trump could potentially create the sort of hesitation that would nullify the protective force field of mutually assured destruction that has kept America safe from nuclear attack since the mid-20th century.

Short of a massive nuclear strike, it’s becoming increasingly clear that the madness of Pelosi and her radicalized Democrats have done catastrophic damage to the nation that will endure for long after Trump has left the White House and may never be reparired.

And Democrats and the media are demanding that Trump be removed under the 25th Amendment?