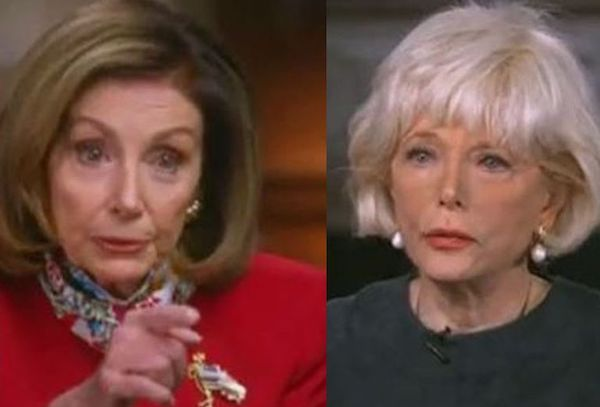 During an interview with CBS host Lesley Stahl, Speaker of the House Nancy Pelosi lost it after she was called out for stalling COVID relief to suffering Americans for 8 months.

For the past 8 months, House Democrats have refused to negotiate with Republicans until they finally settled on a $900 billion package in December.

Stahl pointed out that Pelosi is “not known as a person who compromises.”

“No, I am,” Pelosi fired back. “I’ll compromise. We wanna get the job done. I’m not– I’m– mischaracterized by the Republicans that way. But that’s a tactic that they use. But we know we want results for the American people.”

“What about the COVID relief package?” Stahl questioned. “That was held up for eight months.”

Pelosi wrongfully blamed the delay on Republican’s “obstruction,” however Stahl shot back noting that it was “yours too.”

“No, it wasn’t obstruction,” Pelosi whined.

“You held out for eight months,” Stahl responded.

Stahl then referred to an anonymous Democratic lawmaker who told The Washington Post that delaying the bill made Democrats “look like obstructionists” and was “a huge mistake.”

“It wasn’t a mistake,” Pelosi asserted. “And I would not, and nobody expects me to, to support something that solidifies injustice in our country.”

During the same interview, Pelosi spoke out about her new efforts to impeach President Trump and revealed the real reason behind her decision.

Via Fox News, “Eliminating Trump from being elected again one motivator in impeachment push, Pelosi says”:

House Speaker Nancy Pelosi said in a “60 Minutes” interview that aired Sunday night that one of the motivating factors for some in the new effort to impeach President Trump and remove him from office is to eliminate any chance he has of being elected again.

Last week’s riot at the U.S. Capitol Building has quickly become one of the greatest challenges to Trump’s presidency. Democrats and some Republicans blame him for his overheated rhetoric leading up to the unrest that led to five deaths and dozens of arrests.

Leslie Stahl, the correspondent, mentioned some of the possible outcomes for Trump to Pelosi and pointed out that there is a chance that he somehow manages to leave office and run for president again.

Pelosi responded that the prospect of Trump running for president again is one of the motivations “that people have for advocating for impeachment.”

She said that she prefers using the 25th Amendment “because it gets rid of him.”

“But there is strong support in the Congress for impeaching the president a second time,” she said. “This president is guilty of inciting insurrection. He has to pay a price for that.”