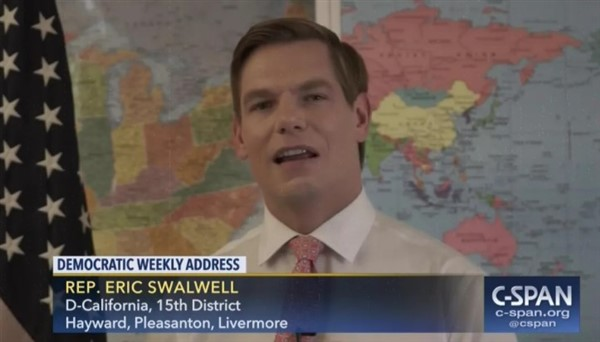 Democrat Rep. Eric Swalwell has been appointed to sit on the House Homeland Security Committee despite his previous relationship with a Chinese spy who he may have had sexual relations with.

The California congressman and party apparatchik was named by Speaker Nancy Pelosi for a spot on the powerful committee, continuing the protection that he enjoys as one of her top lieutenants.

Last month, Axios dropped a bombshell on the 40-year-old lawmaker who during his early political career was sought out by a Chinese intelligence operative as a part of the communist regime’s extensive influence cultivation network in the U.S.

According to Axios, Swalwell was one of the “most significant targets” of the woman whose name is Fang Fang or Christine Fang who utilized “campaign fundraising, extensive networking, personal charisma, and romantic or sexual relationships” to gain proximity to politicians.

Swalwell who is married with two children has refused to discuss the nature of his relationship with Ms. Fang including confirming whether he was sleeping with her.

Via The New York Post, “Pelosi puts Swalwell back on Homeland Security panel despite spy scandal”:

Democratic Rep. Eric Swalwell is joining the House Committee on Homeland Security one month after it was revealed he was targeted by a suspected Chinese spy.

The California lawmaker — who was revealed to have been duped by a Chinese honey-trap spy who cozied to him and other pols in a bid to infiltrate the US political system — announced his appointment back onto the sensitive post in a tweet on Friday afternoon.

“My committee memberships — along with my experience as a prosecutor and as the son and brother of law enforcement officers — will give me a unique opportunity to delve into one of America’s most serious national security threats,” Swalwell wrote.

Members of the committee are responsible for oversight of the US Department of Homeland Security and the nation’s security legislation.

Rep. Swalwell was quick to tout his Homeland Security Committee appointment by expressing his eagerness to prosecute the one-party government’s war against Trump supporters who have been painted with the broad brush of white supremacists and domestic terrorists.

I’m honored and excited to rejoin active service on @HomelandDems, where I plan to focus on highlighting and finding solutions to the scourge of white nationalist extremism. pic.twitter.com/JIhh0fOAPk

Pelosi’s tabbing of Swalwell for such a highly sensitive committee position speaks volumes about her priorities, especially when it comes to doling out rewards to her stooges at the expense of national security.

WIth Chinese puppet Joe Biden only days away from being installed as president and Democrats like Swalwell who have canoodled with Chairman Xi’s spies in positions of power look for America to become increasingly like the human rights-abusing totalitarian state.