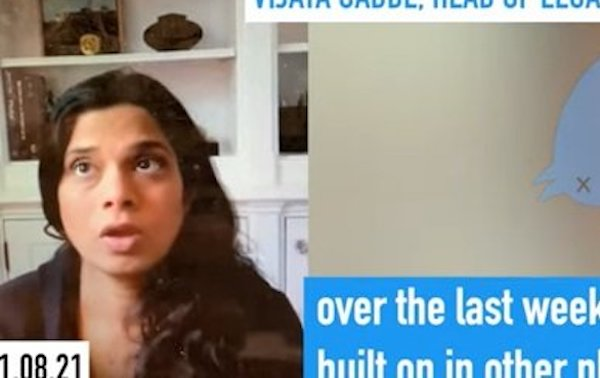 Project Veritas has dropped a second bombshell secret inside recording of Twitter and their plans to censor conservatives in the near future.

“We are focused on one account [@realDonaldTrump] right now, but this is going to be much bigger than just one account, and it’s going to go on for much longer than just this day, this week, and the next few weeks, and go on beyond the inauguration,” Dorsey said in the first video dropped by Project Veritas which was recorded on January 8.

Now this: In the new secret clip, Twitter Executive Vijaya Gadde goes one step further than Dorsey as she explained how Twitter plans on replicating censorship around the world.

“One of the interesting things is a lot of the work that we’ve been doing over the last week is work that we’ve built on in other places around the world, where we’ve seen violence unfold as a result of either misleading information or coded rhetoric,” Gadde said.

“A lot of our learnings here [in the United States] have come from other markets. So, in that sense, you know, we do feel like it is – this is our global approach.” Gadde continued: “We need to be very focused on being able to enforce any of these policies or enforcement decisions we make at scale.”

Gadde goes on to detail Twitter’s censorship efforts by stating, “we decided to escalate our enforcement of the civic integrity policy and use a label that disabled engagements to stop the spread of potentially inflammatory content, which is the content around election interference, election fraud, stealing the election, that type of thing.”

“We think that the severity of what’s happening on the ground, coupled with the information that’s contained in these [election fraud] tweets — misleading information about the election being stolen and massive fraud around the election are what is changing our analysis of how we should enforce this [civic integrity] policy. It [election fraud tweets] is a much more severe violation given what we were seeing on the ground.”

“We’ve seen violence unfold as a result of misleading information or coded rhetoric...”

In a recent article discussing Twitter’s suspension of President Trump, Breitbart News reported that Twitter CEO Jack Dorsey was relaxing on a private island in French Polynesia when he received a phone call on January 6 from Twitter’s top lawyer and safety expert Vijaya Gadde, the notorious leftist who previously appeared alongside Dorsey on the Joe Rogan Experience podcast.

Gadde informed Dorsey that Twitter had suspended President Trump’s account temporarily to prevent him from posting further statements relating to the U.S. Capitol protests that could incite violence. Dorsey was reportedly concerned about the decision but he had delegated moderation decisions to Gadde and generally deferred to her on account suspensions and did so again.

The New York Times recently reported that last Wednesday, Twitter employees gathered in a virtual meeting to discuss the decision to remove President Trump from the platform, many were grateful that Twitter had taken action while others simply wanted to leave the “Trump era” behind, but many were very emotional over the situation and cried.