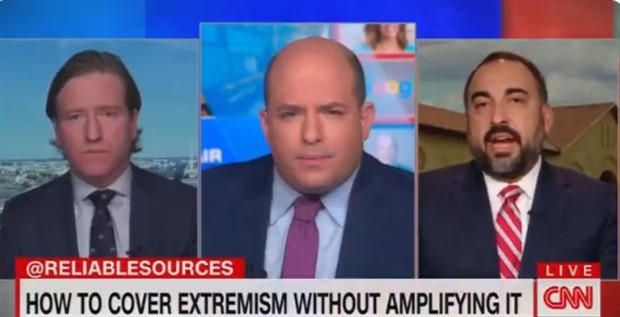 These are tough days at CNN now that President Trump’s historic term in office is about to end and the network faces an uncertain future in the cable television wasteland that will be left when their favorite target returns to private life.

The self-proclaimed “most trusted name in news” has been so reliant on selling a daily fix of hate to legions of Trump Derangement Syndrome addicted zombies that the coming ratings collapse could result in a serious round of downsizing.

Like other opportunists who have exploited the chaos in Washington D.C. that resulted in the brief occupation of the U.S. Capitol by pro-Trump protesters and Antifa provocateurs, CNN is utilizing the Rahm Emanuel maxim of never letting a good crisis “go to waste” to eliminate their competition.

During a panel discussion on the perpetually hysterical Brian Stelter’s “Reliable Sources” over the weekend, former Facebook security officer Alex Stamos joined the host to call for the censorship of independent conservative media voices including OANN and Newsmax.

The panel also bemoaned the fact that CNN’s credibility sucks so badly that conservative “influencers” on YouTube regularly draw larger audiences than the network does.

Former Facebook insider Alex Stamos tells @brianstelter: "We have to turn down the capability of these Conservative influencers to reach these huge audiences... There are people on YouTube for example that have a larger audience than daytime CNN." pic.twitter.com/gP0XtnjhCQ

Via The Washington Examiner:

The former chief security officer of Facebook suggested conservative news outlets One America News and Newsmax be deplatformed following the siege of the Capitol and the proliferation of “radical views” online.

“We have to turn down the capability of these conservative influencers to reach these huge audiences. There are people on YouTube, for example, that have a larger audience than daytime CNN, and they are extremely radical and pushing extremely radical views,” Alex Stamos said Sunday on CNN’s Reliable Sources.

“And, so, it is up to the Facebooks and YouTubes, in particular, to think about whether or not they want to be effectively cable networks for disinformation. And then we’re gonna have to figure out the OANN and Newsmax problem that these companies have freedom of speech, but I’m not sure we need Verizon, AT&T, Comcast, and such to be bringing them into tens of millions of homes,” he continued.

The discussion was more evidence that the real fascists are on the left and that they will not stop until they have silenced all of those whose viewpoints do not align with theirs – in CNN’s case, there is the added motivation of being able to survive in a post-Trump media environment.

How bad are things at CNN?

CEO Jeff Zucker just announced that CNN was pulling the plug on CNN Airport, the network’s long-running propaganda distribution system to brainwash a captive audience of stranded travelers in the nation’s airports.

Jeff Zucker has notified CNN staff that "the CNN Airport Network will end operations as of March 31."

"The steep decline in airport traffic because of COVID-19, coupled with all the new ways that people are consuming content on their personal devices, has lessened the need..." pic.twitter.com/9se3oCw1gr

While lessened air travel due to the pandemic is the stated reason for CNN’s decision, it is likely also at least partially attributable to the loss of credibility to millions for being the most hysterical, biased, and virulently anti-Trump network on television.

There will be much time spent on the ongoing efforts to demonize Trump supporters as dangerous domestic terrorists, insurrectionists, and white supremacists in order to grease the rails for oppressive new laws but that too will peter out.

CNN could always return to the glorious days of the Obama administration when the Democrat regime was coddled while the network inundated viewers with lurid celebrity sex scandals, mysterious airline disappearances, and missing teenaged white girls but there has been enough damage to the brand over Trump’s tenure that it could be impossible to rely on the old business model.

The network jumped the shark during the period when sleazy lawyer Michael Avenatti and glorified prostitute Stormy Daniels dominated coverage and there was just no coming back from that.

Killing off the competition is one thing, convincing people to tune in to their overflowing electronic dumpster of fake news and lies is another.