Last week, when Michael Bloomberg entered the race for the Democrat nomination, several senior editors left Bloomberg News to work on his campaign. The entire Bloomberg conglomerate then issued a rather astonishing statement. Because Michael Bloomberg remained at the head of the company and because company policy forbade investigating Bloomberg’s business dealings, Bloomberg, the news organization, was going to promise not to investigate his Democrat rivals either. They were, however, going to continue to investigate President Trump.

Bloomberg Editor-in-Chief John Micklethwait just sent this note to staffers: "There is no point in trying to claim that covering this presidential campaign will be easy for a newsroom that has built up its reputation for independence in part by not writing about ourselves..." pic.twitter.com/RvfvpsZgDV

Now the Trump campaign has responded. 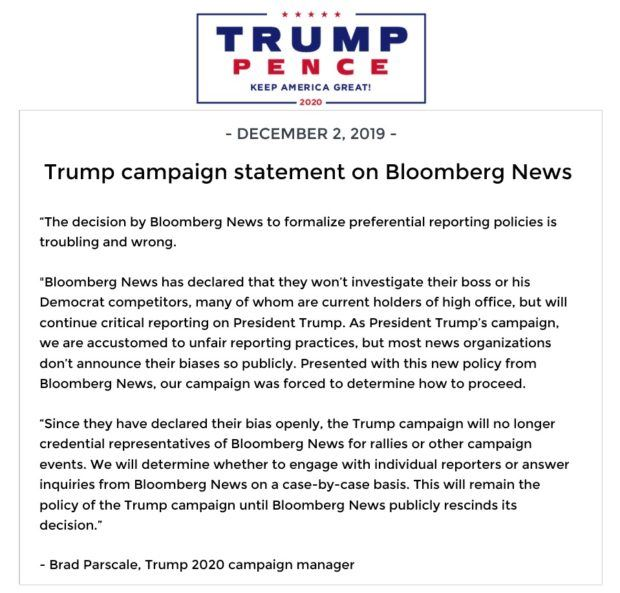 Media outlets should be independent and fair, and this decision proves that Bloomberg News is neither.

The @GOP stands with @TeamTrump and will no longer credential Bloomberg representatives. https://t.co/nxWiBbEI0s

This was the right call to make. Bloomberg is either a legitimate news gathering organization or its an adjunct to the Bloomberg campaign and the Democrat party. The whole “government of the day” schtick is just self-serving pretentious crap that tries to sanitize the untenable ethical position (okay, I laughed at writing “ethical” in relation to a media outlet). An ethical position that is so transparently corrupt that even MSNBC noticed (though Tater Stelter hasn’t):

But then it gets worse, because the President’s actions touch on everything: the economy, foreign policy, trade, etc. etc., and so even non-political Bloomberg coverage is tied in some way, shape or form to Trump, who is a Bloomberg rival.

If Bloomberg does win the nomination, the same dodge can be used to not investigate him then. Ditto for any other Democrat who happens to win. There is no way the Trump campaign should go along with this nonsense and it is good to see that they aren’t.