President Donald Trump kicked off the week Monday by retweeting a fake photo of House Speaker Nancy Pelosi in a hijab standing in front of the Iranian flag.

“The corrupted Dems trying their best to come to the Ayatollah’s rescue. #NancyPelosiFakeNews,” the tweet from an unverified account reads.

The corrupted Dems trying their best to come to the Ayatollah's rescue.#NancyPelosiFakeNews pic.twitter.com/a0ksPHeXCy 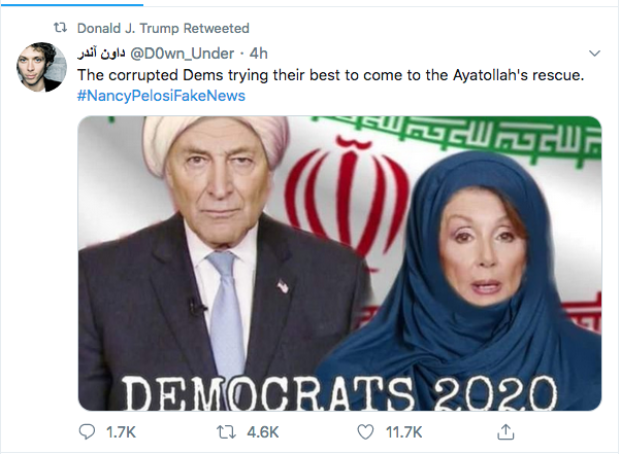 Trump ordered the killing of Iranian Gen. Qasem Soleimani earlier this month. Democratic leaders in Congress were not told about the strike in advance.

The president recently accused Pelosi of defending Soleimani, saying from the White House, “When I see Nancy Pelosi trying to defend this monster from Iran who’s killed so many people … I think that’s a very bad thing for this country.”

“It’s a losing argument, politically, too,” he continued.

Trump also criticized Democrats during a rally in early January.

“Do you believe that one? Nancy. Nancy. Nervous Nancy. But here’s a guy who slaughtered and butchered civilians all over and military, whoever was in his way,” he said. “They’re all trying to say ‘how dare you take him out that way? You should get permission from Congress. You should come in and tell us what you want to do.’”