Legendary Republican operative Roger Stone is facing prison time after he was convicted on process crimes pertaining to the Robert Mueller investigation, which failed to find any evidence that the 2016 Trump campaign colluded with the Russians.

A juror in the Stone case named Tomeka Hart has a Twitter history disparaging Trump, and retweeting anti-Stone commentary after Stone’s arrest, including sharing articles about the Roger Stone case, according to a masterful thread by MAGA researcher Shem Horne.

Now, court documents obtained by NATIONAL FILE (presented below) show that a Russian national who used the fake name “Henry Greenberg” when meeting with Roger Stone in 2016 admitted under oath to being a longtime FBI informant. Trump 2016 campaign adviser Michael Caputo has submitted documentation in this article to U.S. Attorney John Durham, who is investigating corruption on the part of federal government agencies during the past presidential election.

For context, NATIONAL FILE will present some background on the Ukrainian named Alexei Rasin and the Russian who identified himself as “Henry Greenberg,” both of whom met with Stone in May 2016 in an attempt to push anti-Hillary Clinton opposition research to Stone. Then, we present below the documents proving that one of these men served as a longtime FBI informant, including during Robert Mueller’s reign as director of the FBI. Mueller served as FBI director from 2001 to 2013 before leading the special counsel investigation into the 2016 Trump team.

I located Alexei Rasin and spoke to him by phone. Rasin did not know that he was in the Mueller report. When told that he appeared in the report, Rasin said, “Wow, quite interesting.” He declined to be interviewed or to state whether or not Mueller ever contacted him.

Mueller clearly did not want to get to the bottom of the evidence that Stone was set up. Stone, who is now charged with process crimes in connection to the investigation, is under a gag order regarding his case. If Mueller had concluded that Stone was set up that could definitely change the Roger Stone criminal case.

Rasin met with Stone in May 2016 alongside Rasin’s associate “Henry Greenberg,” whose name is Gennadiy Vasilievich Vostretsov and who also goes by “Henry Oknyansky.” Greenberg/Vostretsov/Oknyansky was identified by Stone’s lawyer as a longtime FBI informant.

Mueller claimed he could not find Rasin during his investigation, even though Rasin has a current condo address in Naples, Florida, a mailbox address in North Miami, and recently appeared pro se in court to file bankruptcy on loans including a loan from the U.S. Department of Education. Rasin’s court date occurred in November 2017 while the Mueller investigation was active.

Mueller clearly did not make much of an effort to contact this mysterious figure who tried to sell Clinton research to Stone. Big League Politics located phone numbers and email addresses associated with this Ukrainian man after just minutes of research.

“Oknyansky was accompanied to the meeting by Alexei Rasin, a Ukrainian associate involved in Florida real estate. At the meeting, Rasin offered to sell Stone derogatory information on Clinton that Rasin claimed to have obtained while working for Clinton. Rasin claimed to possess financial statements demonstrating Clinton’s involvement in money laundering with Rasin’s companies. According to Oknyansky, Stone asked if the amounts in question totaled millions of dollars but was told it was closer to hundreds of thousands. Stone refused the offer, stating that Trump would not pay for opposition research,” the Mueller report states.

“The Office did not locate Rasin in the United States, although the Office confirmed Rasin had been issued a Florida driver’s license. The Office was otherwise unable to determine the content and origin of the information he purportedly offered to Stone. Finally, the investigation did not identify evidence of a connection between the outreach or the meeting and Russian interference efforts,” the Special Counsel writes in the Mueller report.

How could Mueller not locate Rasin?

Court documents show that Rasin was in bankruptcy court in the Southern District of Florida in Fort Lauderdale representing himself (pro se) filing for bankruptcy in November 2017.

Rasin signed a voluntary petition for bankruptcy on October 13, 2017. 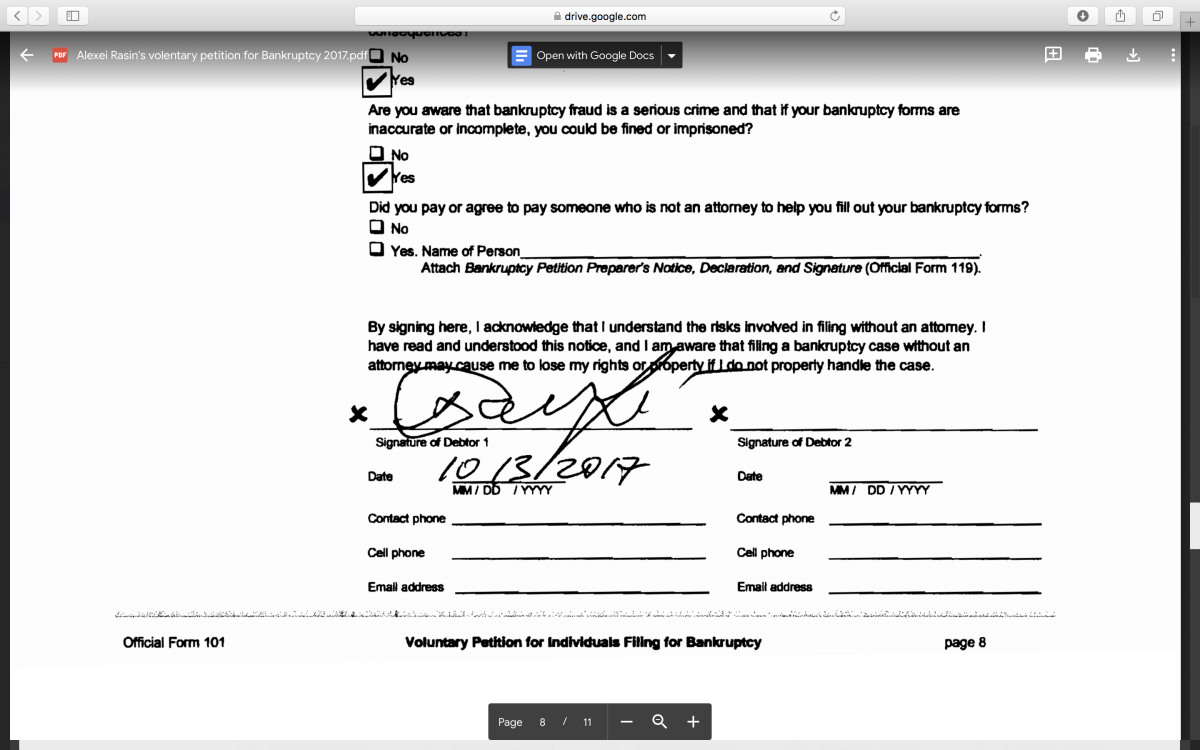 “By way of example, as you know, back in June I sent this Committee a letter regarding a longtime FBI informant named Gennadiy Vasilievich Vostretsov who, under the alias “Henry Greenberg”, was sent to approach my client in May 2016 with claims of having access to information that could impact the election,” Stone’s attorney Grant Smith wrote in a letter to Rep. Devin Nunes prior to Stone’s arrest for alleged process crimes during the course of the Robert Mueller investigation.

“Mr. Stone not only immediately and forcefully declined to participate in anything this FBI informant was proposing, but never saw or spoke to the informant again. Mr. Stone believes it highly likely that Mr. Vostretsov/Greenberg’s status as an FBI informant was not “former”, and that Vostretsov/Greenberg was, in fact, actively working on behalf of the FBI at the time of their meeting, acting upon a calculated effort to entrap Mr. Stone and, further, to infiltrate and compromise the Trump effort. Notably, Vostretsov was admitted to the country nine separate times on an FBI Informant’s visa,” Smith writes on Stone’s behalf.

NATIONAL FILE has obtained a full Dossier on the real man behind the name “Henry Greenberg,” and his work with the FBI, including the bombshell affidavit.