According to Chinese state-run media a man died of complications due to the Hantavirus while traveling in Shandong Province in China on Monday.

The man was traveling by bus and several other passengers tested positive for the virus. 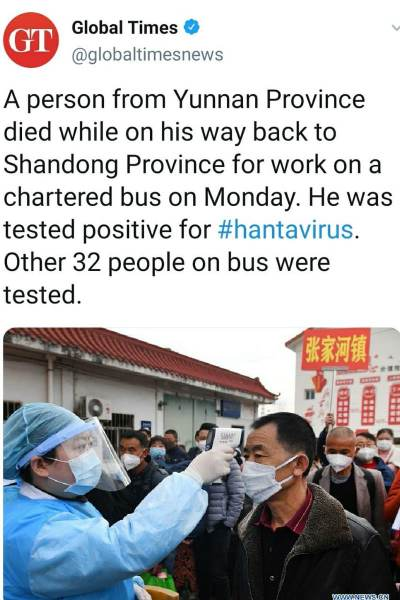 The Hantavirus is spread by rats and rodents.

On Twitter, China’s Global Times wrote that one man in the country had tested positive for hantavirus. According to the state media, the man, a resident of Yunnan Province, died on a bus while travelling to Shandong Province for work on Monday.

Hantavirus Pulmonary Syndrome: Early symptoms of HPS include fatigue, fever and muscle aches, especially in thighs, hips, back, and sometimes shoulders. An infected person may also experience headaches, dizziness, chills, and abdominal problems. In case of late symptoms, usually after four to 10 days, one may show coughing and shortness of breath. It can be fatal too in some cases.

Hemorrhagic Fever with Renal Syndrome: In case of HFRS, symptoms develop within one to two weeks after coming in contact with the virus. But in rare cases, it may take up to eight weeks to show symptoms. Initial symptoms include intense headaches, back and abdominal pain, fever, chills, nausea, and blurred vision. On the other hand, late symptoms are low blood pressure, acute shock, vascular leakage, and acute kidney failure.