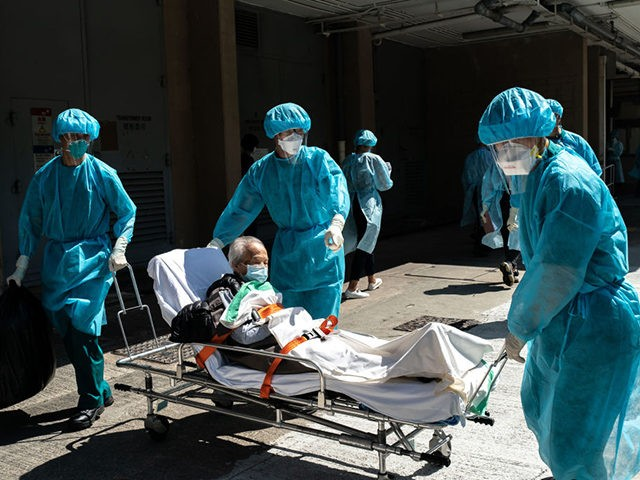 According to Dalian authorities, two of the new locally transmitted cases recorded on Friday were among the seafood worker’s “close contacts, both of whom showed symptoms. None of the three individuals — who are all in stable condition — had left the city for two weeks before contracting the virus,” Shanghai’s state-owned Sixth Tone reported. The seafood worker “lives alone” according to the report, and “had shown symptoms on July 16” prior to being diagnosed with coronavirus Wednesday. The source of the man’s coronavirus infection remains unknown.

“Government inspectors detected the coronavirus in multiple areas of the seafood processing factory where the first patient works — in frozen food, at on-site dining facilities, and in workers’ dormitories, among other places — though an inspection of the metal factory where one of the other two patients works did not find signs of the virus,” the publication noted. “Zhao Lian, deputy director of Dalian’s health department, said the local government has suspended operations at the seafood processing factory, as well as 18 local businesses that distribute the company’s products.”

Dalian officials on Thursday said they “plan to test 160,000 people living in the city’s seafood trade zone,” according to Sixth Tone, and “more than 190,000 people across the city,” according to the Global Times. A national health commission has dispatched 18 health “experts” to Dalian to support the containment efforts during the CCP-declared “wartime mode.”

“[L]ocal residents are required to undergo testing before taking subway line 3,” the local transit line running through the port city’s seafood trade zone that is “closely related to the seafood company,” according to an official Dalian government mandate.

At a municipal government meeting on Thursday, Dalian authorities “urged widespread disinfection” throughout the city and “the launch of COVID-19 [Chinese coronavirus] prevention and control inspections in key areas including shopping malls, wholesale markets, and cold-chain warehouses, and nucleic acid testing for employees working in those key areas.”

“Indoor public venues such as internet cafes, shower rooms, and mahjong [Chinese game] and poker rooms in medium-risk regions” will be forced to close in an effort to curb the spread of the virus. Dalian will also close “all kindergartens and nurseries starting Friday,” city officials said. The Dalian government has “urged medical institutions to upgrade their precaution level to prevent new infections in hospitals,” the Global Times wrote.

“Dalian residents have been asked not to leave the city. Anyone who intends to leave the city should be tested for COVID-19 [Chinese coronavirus] up to seven days before their planned travel and present a negative result, local officials told media at a press conference on Friday.

“Two communities in Dalian have been designated high-risk,” municipal authorities said at a press conference on Thursday. “For those communities put under lockdown, local government has established a team to provide daily necessities,” the Global Times claimed.