Man At BLM Event In CO Allegedly Fires At Jeep That Was Allegedly Fleeing Incident; TX Driver Kills BLM Protester Who May Have Aimed AK-47 At Him, Police Say 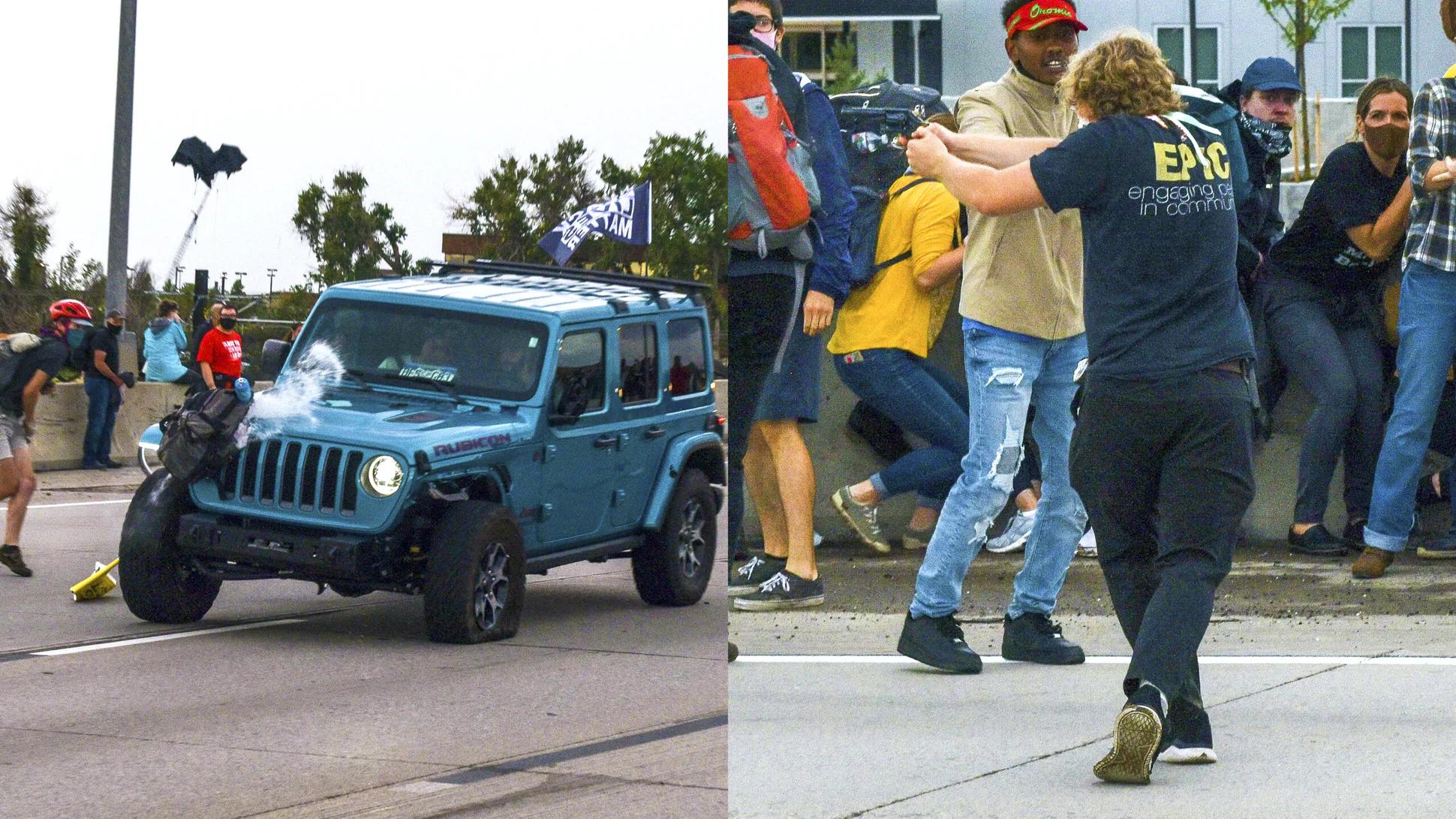 Two violent incidents broke out at Black Lives Matter events in Aurora, Colorado, and Austin, Texas, over the weekend that involved shooting at vehicles on the road.

In Colorado, a Jeep that was allegedly fleeing a violent incident drove through a Black Lives Matter event where one of the protesters opened fire on the Jeep. Two people were struck and taken to local hospitals. Police said it was not clear if the protester was the only person who fired a weapon or if other people did as well.

“While the Jeep was being driven through the crowd, multiple shots were fired by a protester,” the Aurora Police Department said in a statement. “At this time it is unknown if multiple people fired their weapons, or if it was just one individual. Also, there have been no reported injuries reported to us about anyone being hit by this vehicle.”

“During preliminary interviews with the Jeep driver, he advised officers that while on I-225, his vehicle began to be surrounded by protesters who were yelling and striking his vehicle,” police added. “He also claims that a white pickup truck struck the front of his vehicle. He claims that the reason that he drove towards the protesters is because he was scared and trying to get away.”

The Aurora Police Department tweeted out photographs of the suspect, writing: “UPDATE: DO YOU RECOGNIZE THIS MALE? This male is a person of interest that shot 2 people yesterday on I-225. Please reach out to @CrimeStoppersCO with tips. You can remain anonymous and be eligible for a reward of up to $2,000.”

UPDATE: DO YOU RECOGNIZE THIS MALE?

This male is a person of interest that shot 2 people yesterday on I-225.

Please reach out to @CrimeStoppersCO with tips. You can remain anonymous and be eligible for a reward of up to $2,000. https://t.co/hSD2ac6gCp pic.twitter.com/iviXgdfCR9

In Texas, 28-year-old Garrett Foster, who was at a Black Lives Matter event with an AK-47, allegedly approached a car that apparently was trying to get out of the area.

“Austin’s police chief, Brian Manley, told reporters on Sunday that as the motorist turned, a crowd of protesters surrounded the vehicle, and some struck the car,” The New York Times reported. “Minutes after the shooting, the driver called 911 and said he had been involved in a shooting and had driven away from the scene, Chief Manley said. The caller told dispatchers he had shot someone who had approached the driver’s window and pointed a rifle at him.”

“According to police, gunshots were fired from inside the vehicle at Foster. They said during the initial investigation, it appears Foster may have pointed his weapon at the driver of the vehicle prior to being shot,” CBS Austin reported. “After the first volley of gunfire, another individual reported hearing the shots and saw the vehicle driving away from the crowd. This person then drew their concealed handgun from an ankle holster and fired multiple shots at the vehicle as it drove away.”

Earlier in the night, Foster said that he was bringing his AK-47 because “they don’t let us march in the streets anymore, so, got to practice some of our rights.”

“I mean if I use it against the cops, I’m dead,” Foster said. “And, I think all the people that hate us and want to say sh** to us are too big of p***ies to stop and actually do anything about it.”

Garrett Foster, the Black Lives Matter supporter who was shot and killed tonight in Austin, TX, was interviewed with his AK47.