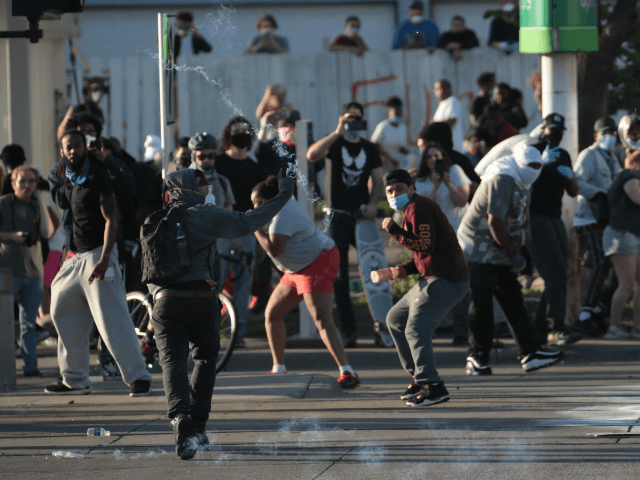 The site of George Floyd’s death is now a no-go zone for police and a crime-infested nightmare for local residents, reports the far-left New York Times.

Two months after Floyd died while in police custody, where he died “remains a sacred space” and a “a no-go zone for officers,” per the Times.

“At night,” the Times admitted, “the space is increasingly a battleground, with shootings and drug overdoses.”

Andrea Jenkins, a member of the Minneapolis City Council, who called for the police to be disbanded while taxpayers shelled out tens of thousands of dollars for her private security, described the area to the Times: “There are constant gunshots every night. Emergency vehicles can’t get in. Disabled people are not able to access their medications, their appointments, their food deliveries, et cetera. It’s a very challenging situation.”

A local resident said things are so bad at night, there’s a bullet hole in the windshield of her car. She wants to call police to protect her three young children but knows there is no point because the police can’t come. Obviously, any kind of police presence would almost certainly start a riot.

Things are so bad, a doctor set up an ad hoc medical station to treat victims of criminal violence:

“My nighttime world, after sunset, I have taken care of double gunshot wounds, drug overdoses.” One night a man wounded by gunfire drove a bicycle past the barricades, she said, before collapsing outside her tent and yelling: “I’m shot! I’m shot!”

After the pregnant woman was killed nearby in early July, and having dodged gunfire herself, Dr. Kawiecki limited the hours of her medic station from 9 a.m. to 9 p.m.

Of course, violent criminals understand this, which is why they’re flocking to the area and turning it into an unlivable war zone. Because…

This is what happens when there’s no police presence.

Nevertheless, these fools refuse to surrender. They still want to “reimagine” public safety without trained police.

I’m sorry, but this republic of ours is almost 250 years old, Western Civilization is thousands of years old, and we are not going to reinvent the wheel.

We’ve tried the whole soft-on-crime approach, and all it yielded were decades of urban blight, starting in the 60s.

Then along came New York Mayor Rudy Giuliani, a policing philosophy called “broken windows,” and with it, decades of decreasing rates of violent crime no one thought possible.

What’s more, and this is something no one on the left wants you to know:

Shootings of unarmed people (including blacks) have dropped dramatically over the past few years, that black and white deaths at the hands of police officers are almost perfectly representative of the country’s racial make-up involving police interactions, that the black imprisonment rate has been dramatically shrinking since 2006, that blacks and whites are equally satisfied with their local police.

So we had just hit what you might call a kind of sweet spot, that place where through trial and error, by finessing this policy and tweaking that policy, we were having our cake and eating it, too; we had low crime rates, and issues involving overly aggressive or poorly trained police (almost exclusively in cities where Democrats run the police departments) were falling.

Trump was improving the lives of black America: the black unemployment rate hit a recorded low, wages were on the rise, opportunity zones were having an effect, and the push was on to liberate poor, predominantly black Americans from the scourge of urban, government-run schools.

That had to stop, and the death of George Floyd was the perfect excuse.

Yes, George Floyd’s death was a terrible thing, but Democrats and the media exploiting an unfortunate death to wage a war on black America is an abomination.