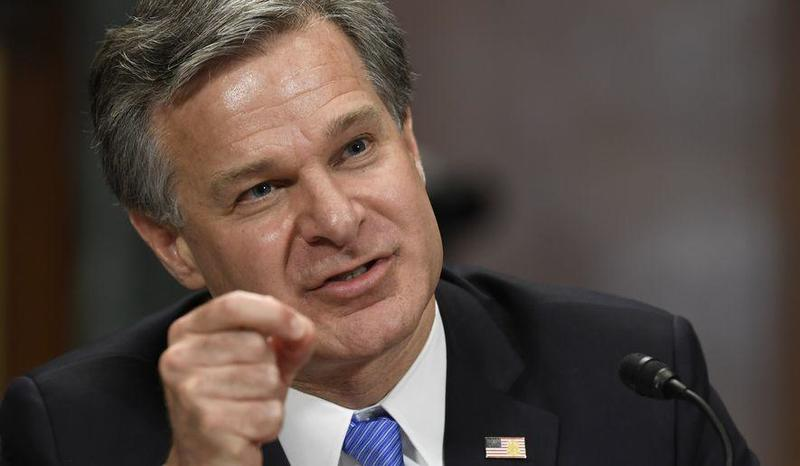 FBI Director Christopher Wray has been subpoenaed by the Senate Committee on Homeland Security and Governmental Affairs to produce “all documents related to the Crossfire Hurricane Investigation,” which includes “all records provided or made available to the Inspector General” regarding the FISA probe, as well as documents regarding the 2016-2017 presidential transition, according to Politico.

The subpoena was issued by Sen. Ron Johnson (R-WI) as part of his investigation into the origins of Russiagate. It gives Wray until 5 p.m. on Aug. 20 to produce the documents.

Johnson also released a lengthy letter on Monday in which he defended his Committee’s investigation and accused Democrats of initiating “a coordinated disinformation campaign and effort to personally attack” himself and Sen. Chuck Grassley (R-IA) in order to distract from evidence his committee has gathered on Joe and Hunter Biden’s Ukraine dealings.

“We didn’t target Joe and Hunter Biden for investigation; their previous actions had put them in the middle of it,” reads the Monday letter, which outlines the timeline and connections between Joe Biden’s policy actions in Ukraine and his son Hunter’s relationship with Burisma Holdings, a Ukrainian natural gas company, according to Just The News.

“Many in the media, in an ongoing attempt to provide cover for former Vice President Biden, continue to repeat the mantra that there is ‘no evidence of wrongdoing or illegal activity’ related to Hunter Biden’s position on Burisma’s board,” wrote Johnson. “I could not disagree more.”

Johnson noted evidence gathered by his committee showed Joe Biden met with his son’s business partner, Devon Archer, in April 2014 and within a month the vice president then visited Ukraine and both his son Hunter and the business partner were put on the Burisma board as the firm faced multiple corruption investigations.

“Isn’t it obvious what message Hunter’s position on Burisma’s board sent to Ukrainian officials?” Johnson asked. “The answer: If you want U.S. support, don’t touch Burisma. It also raised a host of questions, including: 1) How could former Vice President Biden look any Ukrainian official (or any other world leader) in the face and demand action to fight corruption? 2) Did this glaring conflict of interest affect the work and efforts of other U.S. officials who worked on anti-corruption measures?” -Just The News

Johnson also denied that he had been on contact with, or received documents from, Russian-tied Ukrainians.

“The only problem with their overblown handwringing is that they all knew full well that we have been briefed repeatedly, and we had already told them that we had NOT received the alleged Russian disinformation,” wrote Johnson. “The very transparent goal of their own disinformation campaign and feigned concern is to attack our character in order to marginalize the eventual findings of our investigation.”

According to the report, Johnson’s committee has secured testimony from at least one State Department official who worked in Ukraine, and says the Bidens’ conduct created the appearance of a conflict of interest.

“The appearance of family profiteering off of Vice President Biden’s official responsibilities is not unique to the circumstances involving Ukraine and Burisma,” wrote Johnson. “Public reporting has also shown Hunter Biden following his father into China and coincidentally landing lucrative business deals and investments there.

“Additionally, the former vice president’s brothers and sister-in-law, Frank, James and Sara Biden, also are reported to have benefited financially from his work as well. We have not had the resources to devote investigatory time to these other allegations, but I point them out to underscore that Ukraine and Burisma seem more of a pattern of conduct than an aberration.”

“Mr Winer’s counsel has not responded since Thursday as to whether he would accept service of the subpoena,” Johnson wrote. “If he does not respond by tomorrow, we will be forced to effect service through the U.S. Marshals. More subpoenas can be expected to be issued in the coming days and weeks.”

Johnsons subpoena of Wray comes one day after Senate Judiciary Chairman Lindsey Graham (R-SC) fumed on Fox News, after his committee released a document revealing that the FBI misled the Intelligence Committee during the Russia probe when it claimed that Christopher Steele’s salacious dossier was backed up by one of its primary sources.