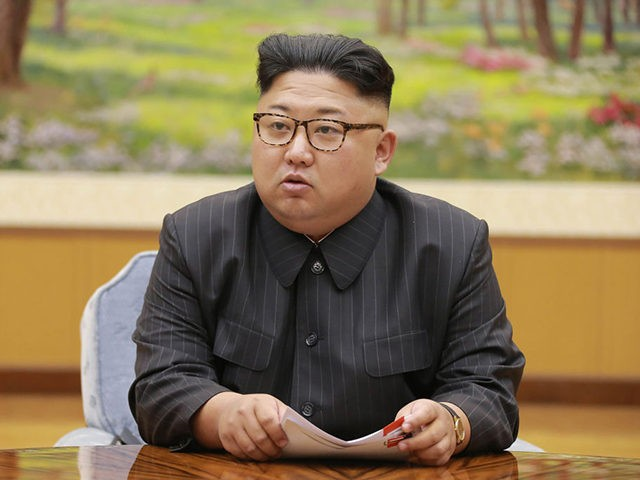 General Robert B. Abrams, commander of U.S. Forces Korea (USFK), revealed in an interview Thursday that the communist dictatorship running North Korea issued “shoot-to-kill” orders on its border with China to prevent smugglers from infecting the country with Chinese coronavirus.

North Korea closed its borders in January in an attempt to prevent the virus — now fueling a pandemic affected nearly every nation on earth — from devastating the impoverished country. Dictator Kim Jong-un has insisted since the pandemic began that his nation has documented zero cases of coronavirus within its borders, and continues to do so at press time, despite North Korea sharing borders with China, South Korea, and Russia — three of the most severely affected countries in the world.

Despite claiming to not have documented any cases in the country, the North Korean dictatorship locked down several major cities and Kim recently announced the construction of a new hospital, the Pyongyang General Hospital, to be completed as soon as possible to address a medical crisis he insists is not occurring.

Reports from South Korean media outlets, citing unnamed sources, have estimated that North Korea has lost over 100 soldiers on its border to coronavirus infections.

General Abrams, speaking to the Center for Strategic and International Studies (CSIS) in an interview streamed online, asserted that the negative effects of international sanctions on North Korea’s economy had increased significantly since the outbreak began. Rather than attempting to continue illegal trade with China — once described as North Korea’s “only game in town” economically — and other rogue states to combat the effects of the outbreak, North Korean officials began actively fighting smuggling from China to prevent uncontrolled contact with Chinese nationals, Abrams said.

“With COVID-19 [Chinese coronavirus], that has accelerated the effects of sanctions on North Korea,” Abrams told CSIS. “They closed their border at the end of January. If you just look back at the sanctions in 2017, that dropped Chinese imports by about 50 percent and then they rebounded last year.”

“When the border shut down with COVID-19, it’s dropped imports from China by 85 percent. So there is a cumulative effect economically of COVID with the sanctions and, of course, North Korea smugglers been trying to get across and, as a result, you know, the regime issued out instructions,” Abrams explained. “So now they have gotten an additional buffer zone, one to two kilometers up on the Chinese border.”

“They’ve got North Korean SOF [special operation forces] manning these things, strike forces, they’ve got shoot-to-kill orders in place, and this is fundamentally about preventing COVID from getting into North Korea,” Abrams said, calling the move “understandable” given the woeful state of North Korea’s communist healthcare system and a series of typhoons in the area that have devastated entire communities.

The combined forces of a pandemic and national disasters have refocused the energy of the North Korean military towards keeping the nation stable, Abrams said, which has resulted in the nation’s southern border, the Demilitarized Zone (DMZ) with South Korea, being “pretty calm.”

“There’s been some bumps and bruises along the way but, in general, I’d say North Korea is abiding by the comprehensive military agreement from September 2018,” Abrams said. “Compared to previous years, the reduction in tension is palpable, it’s identifiable, and you can see it.”

Kim Jong-un signed agreements to reduce tensions on the border with his South Korean counterpart, leftist President Moon Jae-in, during a historic visit by the South Korean to Pyongyang in 2018. Abrams asserted that Pyongyang was keeping to those agreements on the border even while finding other bombastic ways to provoke Seoul, including blowing up a joint liaison office set up in 2018 this summer.

“The regime right now, and the military, is focused principally on getting their country recovered and helping mitigate the risk of COVID-19,” Abrams concluded.

North Korea closed all its borders in January and its state media continues to insist that the tactic worked. The World Health Organization (W.H.O.), a U.N. agency with close ties to North Korean ally China, has defended North Korea’s claim. In August, when North Korea announced it had identified a potential coronavirus case in the country, the W.H.O. proclaimed the test on the patient “inconclusive.” As Pyongyang has not published any more information on that case, the number of coronavirus cases in the country officially remains at zero.

Kim Jong-un has personally issued statements reported in North Korean state media warning of the potential the pandemic has of causing severe damage in the country. In July, the state-run Korean Central News Agency (KCNA) published remarks in which Kim reportedly said the pandemic could cause an “unimaginable and irretrievable crisis.”

“He stressed the need to maintain maximum alert without a slight self-complacence or relaxation on the anti-epidemic front, and rearrange and practice stricter anti-epidemic effort,” KCNA asserted. Kim also condemned his underlings for “inattention, onlooking, and chronic attitude [sic]” of lack of urgency regarding the situation.