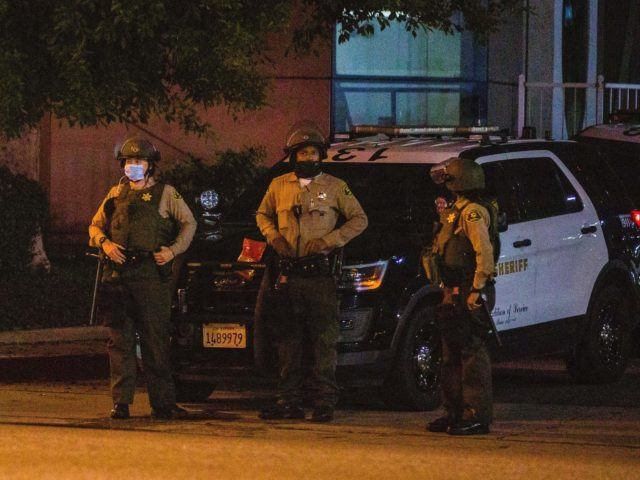 A man who apparently witnessed the shooting of two Los Angeles County Sheriff’s Department (LASD) deputies in Compton on Saturday evening live-streamed his excitement on Instagram.

An unidentified male walked up to a patrol car and opened fire with a pistol, reportedly hitting the two deputies — one in the face, the other in the head. Both are in critical condition, fighting for their lives.

The apparent witness, whose Instagram handle is “beno_thegreat,” delivered a live reaction on the scene.

There is something wrong with our society when people like this standby casually as humans nearby cling to life. All the while the videographer would rather say “damn nigga got aired out” then save a life pic.twitter.com/2e6rI5KsbM

NEW: Video of witness reaction to the LASD deputies being ambushed & shot in Compton with these men seemingly celebrating what they’ve just seen. One yells “No justice, no peace!” as one of the deputies struggles to stand up. @FOXLA https://t.co/ZYL0hx7HxF

A man in the background shouted approvingly: “This is the only justice we’re going to get!”

The apparent witness added: “That n** on a knee. Damn!”

He then showed patrol cars arriving, sirens wailing and lights flashing, continuing his commentary as before.

According to the Los Angeles Times, one of the victims was able to radio for help, though barely able to speak.

One of the victims is a 24-year-old male, and the other is a 31-year-old female with a 6-year-old daughter. Both graduated from the same training class 14 months ago, according to LASD Sheriff Alex Villanueva.

Black Lives Matter activists and self-described anarchists and Antifa supporters have protested at the LASD facility in South Los Angeles, following the shooting death earlier this month of Dijon Kizzee after a confrontation with LASD deputies. Kizzee was allegedly armed.

Some Black Lives Matter activists allegedly tried to block the entrance to the hospital emergency room while chanting, “We hope they die.”

The LASD is offering a $100,000 reward for information leading to the arrest and conviction of the suspect, whose name is not yet known.