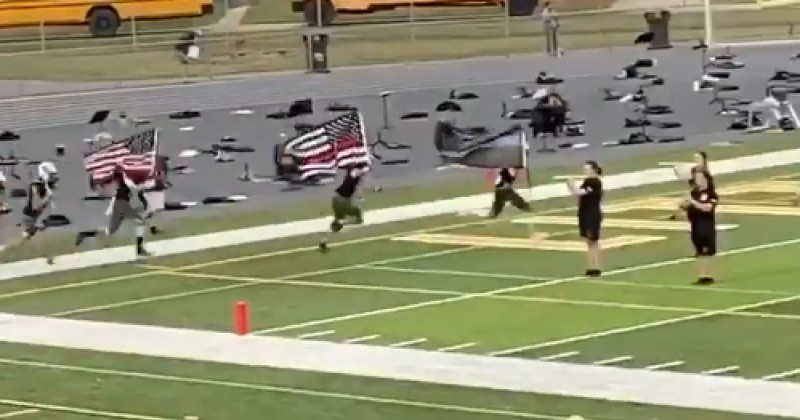 Two high school football players were suspended indefinitely after they carried flags onto the field honoring police officers and firefighters who lost their lives on 9/11.

When asked by Local 12 whether he was trying to make a political statement, senior cornerback Brady Williams, whose father is a police officer, responded, “No, not at all. I was just doing it to honor the people that lost their lives 19 years ago.”

Jarad Bentley, who carried the Thin Red Flag, told the station, “I was all for it. Because my dad is a firefighter, and if it had been him killed on 9/11, I would have wanted someone to do it for him.”

However, the pair were suspended indefinitely by the school’s superintendent after disobeying an order not to carry the flags.

Two Little Miami football players pay the price for civil disobedience. They were told not to carry onto the field thin blue line and thin red line flags at their 9/11 game. They did anyway. The school has now suspended them from the team indefinitely. #ThinBlueLine #ThinRedLine pic.twitter.com/19y9GAvaxr

“We can’t have students who decide to do something anyway after they’ve been told that they shouldn’t be doing it,” said Gregory Power, who claimed the flags were expressing a “political perspective” that other families may not agree with.

Power subsequently claimed he was getting “hate” messages from people who disagreed with his decision.

While people are allowed and even encouraged to show deference and support at sports games for Black Lives Matter, a violent revolutionary Marxist group, honoring 9/11 victims is apparently a “political statement.”

However, Williams was defiant, telling the station, “I realize that this was more than just a football team; these guys are now my brothers.”