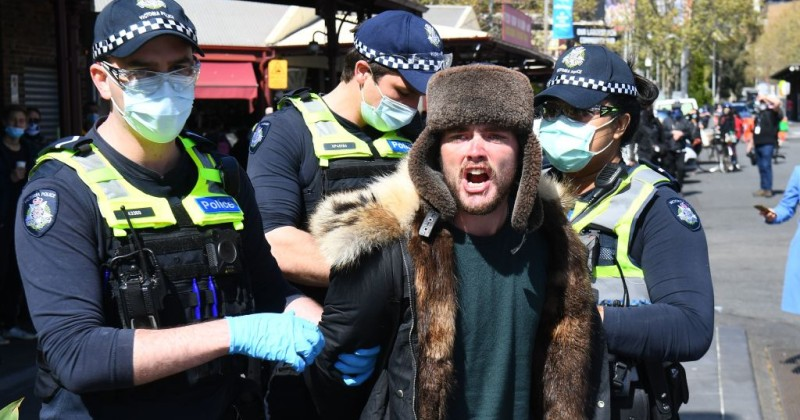 A draconian new coronavirus law could give Australian authorities the power to arrest coronavirus “conspiracy theorists” if it’s thought they may commit a crime in the future.

The new COVID-19 Omnibus (Emergency Measures) bill, which is being debated in the Victoria State Parliament this week, will give local authorities the power to detain people who refuse to self-isolate as well as “conspiracy theorists” and anyone deemed to be at risk of spreading COVID-19 negligently.

A government spokesman told the Age that the measures “could be applied to conspiracy theorists who refuse to self-isolate or to severely drug-affected or mentally impaired people.” Those detained will be held in quarantine facilities.

“If there is one thing that terrifies increasingly tyrannical governments, it’s a loss of control of the narrative, which is why the Australian government is getting a jump start on curbing any so-called “conspiracy theorists” daring to spread information that questions the fear-mongering being used to keep Aussie citizens under lock and key,” reports Zero Hedge.

As we have exhaustively documented, Australia has become the most authoritarian state in the developed world when it comes to the draconian enforcement of COVID rules.

Shouting at her as she weeps & then threatening to take every phone in the house regardless of who it belongs to...Victoria Police going after the big crooks.
pic.twitter.com/QpcT6Rb6Pw

Police have the power to enter people’s homes without a warrant and also snatch children. Earlier this month, a pregnant woman was arrested in front of her children for posting about an anti-lockdown protest on Facebook.

Numerous people have been violently arrested for not wearing a face mask on the street, while journalists have also been arrested merely for covering anti-lockdown protests. Street markets have also been raided and shut down by riot police.

Now police merely have to suspect that you could commit a crime in future in order to carry out detentions and arrests.