“Go Ahead”: President Trump Taunts Pelosi Into Impeaching Him Again 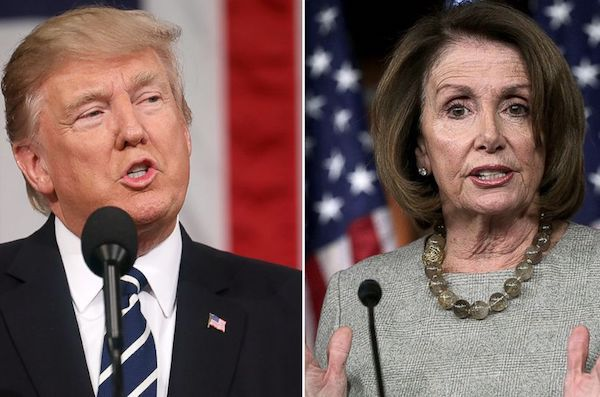 On Monday night during a campaign rally in Ohio, President Donald Trump baited Speaker of the House Nancy Pelosi into impeaching him again over his decision to select a Supreme Court Justice before the November election.

“Go ahead. I want them to do that … I’m the only guy in the world that could get impeached for trying to fill a seat on the Supreme Court,” the President said.

The comments from President Trump come after Pelosi claimed during an interview with The New York Times journalist Kara Swisher that the House of Representatives could impeach President Donald Trump “every day of the week for anything he does.”

Read the conversation below:

Swisher: All right, but I’m going to press you one more time. What is your power to do this? I get the election, but you can get up more. You can speak out more. You can do more impeachments, things like that. Do you have enough power?

Pelosi: Well, we can impeach him every day of the week for anything he does. In fact, for —

Nancy Pelosi: — 200,000 people dying. Well, because look, the American people want to know what we’re doing that affects them directly.

Pelosi’s claim is completely false considering the Constitution states: “The President, Vice President and all civil Officers of the United States, shall be removed from Office on Impeachment for, and Conviction of, Treason, Bribery, or other high Crimes and Misdemeanors.”

During the same interview, Pelosi also attacked Attorney General Bill Barr, saying, “Bill Barr is a complete henchman. He’s a disgrace to the office he holds. He shouldn’t even be a lawyer. He should be disbarred. We’ve held him in contempt of Congress. But he is an employee, and the villain here is Donald Trump. And that is what we have to do is to make sure that he is not reelected.”