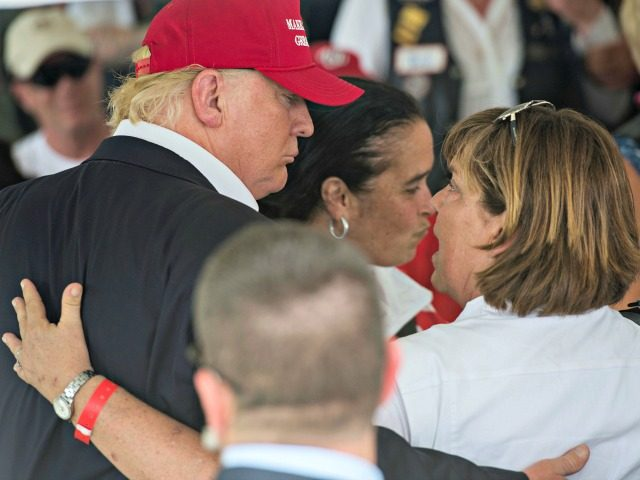 Members of the mainstream media implied that President Donald Trump blamed Gold Star families for catching the coronavirus, after he mentioned an event with them during an interview on Thursday.

Trump mentioned that he met with Gold Star families at an event recently and did not want to enforce social distancing with them despite the risk of COVID. But some in the media interpreted that as Trump blaming the families for catching COVID.

During the interview on Fox News Business, host Maria Bartiromo asked the president, “How is it possible that you did contract the coronavirus?”

He said, “Now, as far as the White House is concerned, somebody got in. There was a day of celebration with Notre Dame, et cetera, et cetera. Somebody got in and people got affected. Whether it was there or something else.”

Bartiromo then asked a different question about what his recovery was like. “Tell me how you felt, what you went through. It’s amazing to me that you’re back in such strong form right now. How did that happen?” she asked.

Trump discussed his recovery and how he felt he had to put himself at risk as the president, and could not just quarantine in a basement like his opponent:

If I wanted to hang out in a basement, I wouldn’t catch it. But I meet a lot of people and I have to. I’m the president of the country. I can’t hang around in a basement.

And yes, sir, he was killed but he saved his friends. He’s so brave, sir. And they tell me these stories and I can’t say, back up, stand ten feet. I just can’t do it. And I went through like 35 people, and everyone had a different story. I could also say don’t tell stories. They’re telling the story of their son who just died or daughter or husband who just died in a war or recently died, mostly over the last 10, 12 years, but some very recent. And I can’t back up, Maria, and say give me room, I want room. Give me 12 feet, stay 12 feet away when you talk. They come within an inch of my face sometimes.

They want to hug me and they want to kiss me. And they do. And frankly, I’m not telling them to back up. I’m not doing it. But I did say it’s like — it’s obviously dangerous. It’s a dangerous thing I guess, if you go by the COVID thing. But I’m thinking — look, I look at the numbers. I figured that you probably — that probably at some point I’d catch it and I’ll get better. That’s what happened. I’ve caught it. I could’ve been out of the hospital in one day.

I had the Regeneron. And I don’t know what would’ve happened without the Regeneron. All I know is I had it and I was better within 24 hours. I felt perfect. I feel perfect now, Maria, otherwise I wouldn’t be able to speak to you.

However, after the interview, some journalists implied that that Trump was blaming Gold Star families for giving him the coronavirus.

The New York Times‘ Maggie Haberman tweeted a Politico report with the headline: “Trump says Gold Star families could have given him Covid-19.”

CNN’s Jake Tapper then quote-tweeted Haberman’s tweet and tweeted about the “grossness” of Trump “seeming to blame his infection on Gold Star families.”

The top Democrat on the Senate Intelligence Committee, Sen. Mark Warner (D-VA), accused Trump of “offloading blame on Gold Star families,” in a familiar refrain that Democrats have pushed about the president not caring about the military.

The President who refused to stand up to Putin in defense of our troops is now offloading blame on Gold Star families, who've sacrificed everything for our nation. It’s time for this President to show respect for our military & take responsibility for his failed #COVID response. https://t.co/gRuNN8mZuX

Politico‘s headline later changed to: “Democrats rip Trump for suggesting Gold Star families could have given him Covid-19.”

Mark Levin tweeted: “The way I read this is that Trump is saying the opposite. He didn’t want to tell the Gold Star families to move back. It was MORE important for him to hear their stories and speak to them, even if it increased his risk.”

Politico lies
The way I read this is that Trump is saying the opposite. He didn’t want to tell the Gold Star families to move back. It was MORE important for him to hear their stories and speak to them, even if it increased his risk.https://t.co/XwU1doIyA6