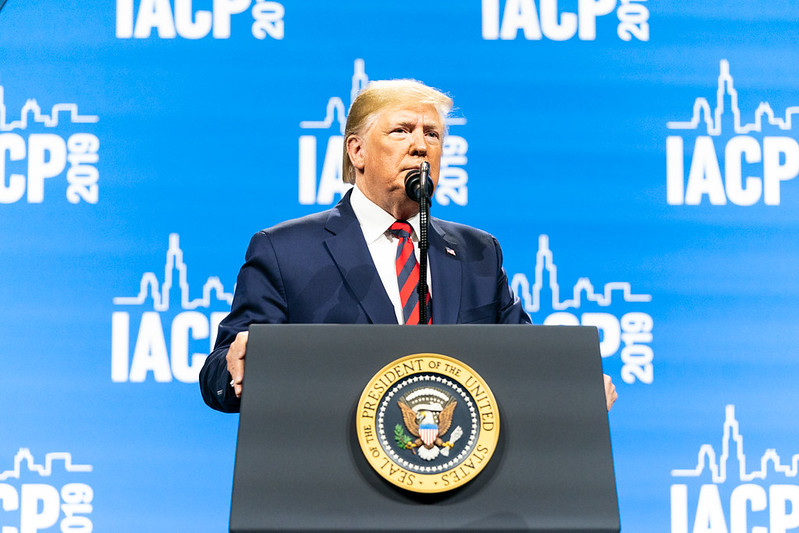 During their first debate, President Donald Trump pressed Democratic nominee Joe Biden to name one police organization that backed his bid for the White House.

Biden couldn’t do it, and there’s a reason for that: Because there aren’t any.

Regardless of his support for, and from, police organizations in the past, because he’s a Democrat today, cops around the country know the party has been Biden’s candidacy has been hijacked by left-wing Marxist ‘revolutionaries’ who want to “defend” police departments, refuse to prosecute serious and serial offenders, and let convicts roam the streets to continue terrorizing law-abiding citizens.

Meanwhile, President Trump has made no bones about his stance regarding police and policing in America: He stands solidly behind them as the race’s only “law-and-order” candidate. And it’s winning him one endorsement after another from police groups and organizations who are happy to have his support.

The latest endorsement, however, is really special because it comes from a police organization that has never before endorsed a presidential candidate. From any party.

Jeff Pearson, chief of the Satellite Beach Police Department and head of the Florida Police Chiefs Association, said he was “honored to announce our endorsement” of the president on Friday.

“Time and time again, President Trump has demonstrated his unwavering support for law enforcement and for the men and women that risk their lives to protect the peace,” Pearson said.

“Just this year so far, 216 law enforcement officers in the United States have died in the line of duty,” he noted further, adding that the figure is “a 93 percent increase from” 2019.

“We salute President Trump for his commitment to honoring our nation’s fallen law enforcement officers and remembering their sacrifice,” Pearson continued. “President Trump’s support of the law enforcement is unmatched, and he continues supporting law enforcement by ensuring we have the tools, the training, and the information that we need to protect our communities.”

“While other politicians are opening attacking law enforcement, President Trump signed the Mental Health and Wellness Act to provide essential services” for police, Pearson said, adding that Trump “has done more for police” than any president.

Trump, meanwhile, tweeted his appreciation for the endorsement, “I was honored to receive the first ever Presidential Endorsement from the Florida Police Chiefs Association. Thank you, I will NEVER let you down!”

In October 2019, the International Union of Police Associations came out in support of President Trump. And the 355,000-strong Fraternal Order of Police has backed him as well.

“Every top Democrat currently running for this office has vilified the police and made criminals out to be victims,” Sam Cabral, the IUPA president, said then. “They seem to take any union’s support for granted. Many of them still refer to the tragedy in Ferguson as a murder, despite the conclusions of every investigative inquiry to the contrary.”

“While his candor ruffles the feathers of the left, I find it honest and refreshing,” Cabral added. “He stands with America’s law enforcement officer and we will continue to stand with him.”