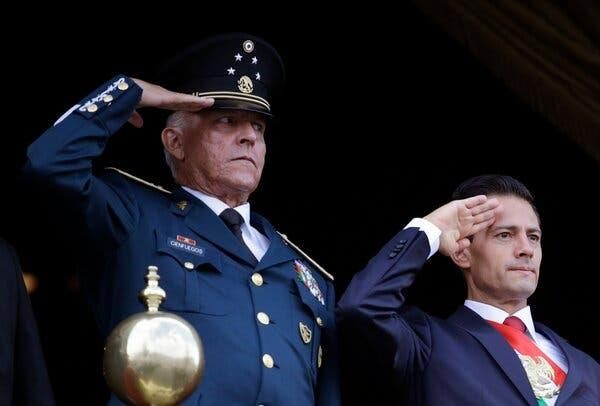 As a sign of just how the continuing US-Mexico “war on drugs” and by extension the war on cartels is going, no less than Mexico’s former top leader of the armed forces has been arrested.

The country’s former defense minister, Gen. Salvador Cienfuegos, was taken into US custody after landing at Los Angeles International Airport on Thursday. The US Drug Enforcement Administration (DEA) had a warrant for his arrest - no doubt a huge shock to the high profile general given he was traveling with his family, presumably on vacation.

Mexico’s foreign secretary, Marcelo Ebrard, was the first to confirm via Twitter that the American ambassador to Mexico informed him of Cienfuegos’ detention.

The charges are related to corruption and drug trafficking ties, including large-scale cocaine, heroin, and methamphetamine distribution and conspiracy, as well as conspiracy to launder the narcotics proceeds through illicit banking transactions, according to the just released indictment.

The charges were initially confirmed in statements by Mexico’s president on Friday:

“I always said that it wasn’t just a crisis, but a decadence that we were suffering from,” President López Obrador said in a press briefing. “It’s regrettable that a former defense minister is detained, accused of ties to drug trafficking.”

The 72-year old general was defense minister under former President Enrique Peña Nieto from 2012 to 2018.

The US embassy notified Mexico’s Ministry of Foreign Affairs of the high profile detention at LAX:

Mexico’s current president has controversially been a critic of longtime public calls to use the military to combat organized crime groups. Cynics might say it’s because he knew precisely the levels of corruption within top military ranks, and lack of accountability especially at the top of the command structure, as this latest DEA arrest demonstrates.

Gen. Cienfuegos has been accused in Brooklyn of conspiring w/ the H-2 cartel a violent Mexican trafficking group which traces its roots back to the Beltran-Leyva organization. pic.twitter.com/pVtrUZWmQf

WSJ notes meanwhile that “In the late 1990s, another senior army leader, anti-drug czar Gen. Jesús Gutiérrez Rebollo, was arrested and sentenced to 40 years in jail for taking bribes from drug cartels. He died in 2013 in prison.”

Should Gen. Cienfuegos eventually be tried, convicted and sentenced here in the US, it is likely he’ll serve out any potential prison time here rather than be returned to Mexico.