Within mere minutes of major US networks in what appeared a coordinated effort declared Joe Biden President-Elect the official newspaper of the Central Committee of the Chinese Communist Party issued it’s first reaction which took the form of gleeful mockery.

“HaHa,” tweeted the People’s Daily, the largest state-owned newspaper in China. Two laughing emoji were also included in the message.

Clearly gloating as well as trolling President Trump who has waged a trade war and pressure campaign against Beijing that has plunged Sino-US relations to the lowest state since the Cold War, state-run People’s Daily retweeted Trump’s Saturday morning declaration asserting he had won “by a lot” - but with the following:

The tweet was issued just as the wires, including AP, projected Biden as winner of the 2020 presidential election.

Clearly Beijing is eager to not only have the “last laugh” but to rub it in as much as possible.

The Associated Press along with others had previously reported the unsurprising view of leaders in China - that they were outright rooting for a Biden victory, pinning hopes on a change of administrations greatly easing tensions centered on trade, security, and technology. 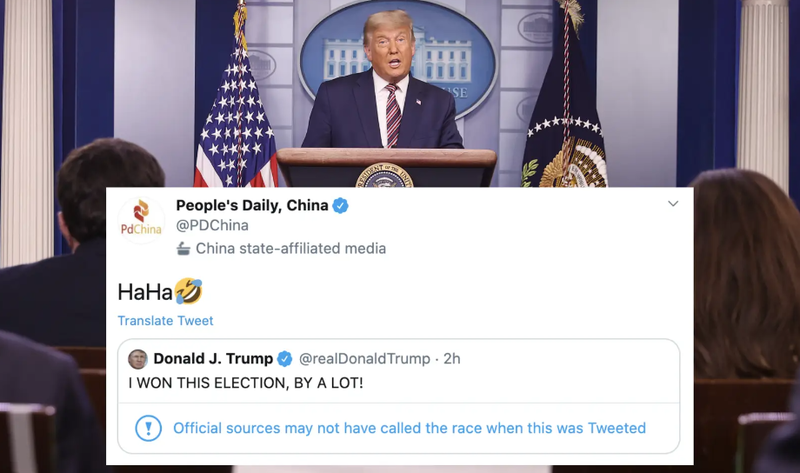 The AP wrote last month that “a Biden presidency might restore a more predictable relationship after the shocks of Trump’s tariff war and his outreach to India, seen as a strategic rival, and Southeast Asian countries, with which Beijing has a series of territorial disputes, Chinese analysts say.”

Citing one of these analysts who hopes for a ‘more stable’ situation to emerge under a Biden White House, the report said:

At the least, Biden’s policy “won’t be as emotional and ridiculous as Trump’s,” said Yu Wanli, a professor of international relations at Beijing Language and Culture University.

“Democrats appear less militant, so they may take more care to prevent even limited military conflicts and pay more attention to crisis management communication with China,” said Shi Yinhong of Renmin University in Beijing, one of the country’s most prominent scholars of international relations.

Recall too that Trump while speaking from the White House and from the campaign trail in the past months had greatly increased his public references to the “Chinese virus” and “Wuhan virus” in very direct swipes at Beijing’s handling of the outbreak which originated in Wuhan late last year before spreading across the world.

Given that public opinion polls in China revealed that more of the population expected a Trump victory, it appears they are breathing a sigh of relief today in Beijing.