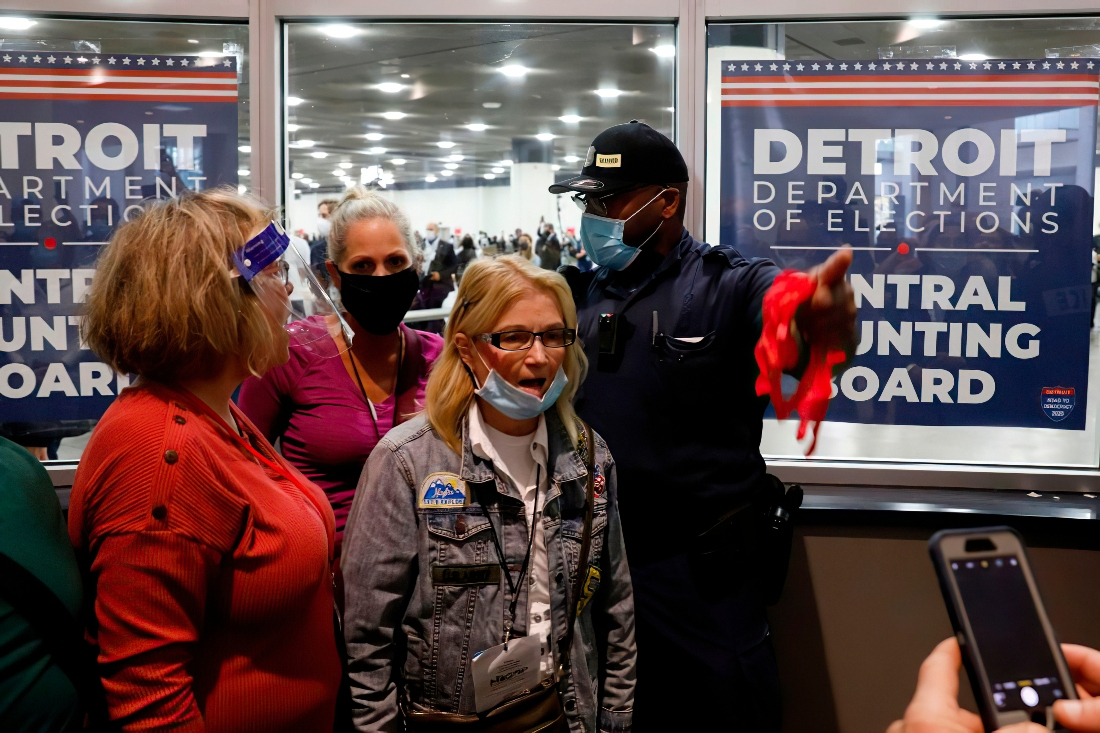 For the past week or so, we’ve been hearing about how electronic machines belonging to Dominion Voting Services, a Canadian company with a headquarters in Denver, may have been programmed to ‘switch votes’ from President Donald Trump to Democratic rival Joe Biden.

On Sunday, Sidney Powell, who joined the Trump campaign’s legal team, hinted to Fox Business Network’s Maria Bartiromo that she and others were hearing about “substantial problems with Dominion system.”

Then, out of the blue on Thursday, an avalanche of new information regarding potential fraud involving those systems came crashing down on the news cycle.

Wow. If that’s accurate, that literally changes the outcome of several battleground states and, of course, not in Biden’s favor.

The president’s tweet came after campaign and personal lawyer Rudy Giuliani noted that whistleblowers from Dominion were set to come forward and reveal alleged chicanery involving changing of votes (complete with photographs).

“Coleman has the community people and he’s got the Dominion people,” Giuliani told Steve Bannon’s “War Room” podcast. “And they were the ones who were the actual, not poll watchers, the actual observers who were excluded, who were lied to, two of whom stayed behind after all the Republicans had left out and they’re the ones who got the evidence of the 100,000 votes coming in. And they have some photographs also.”

Now, it appears, at least one of those whistleblowers has come forth.

The Epoch Times has more:

Melissa Carone, who was doing IT work at the TCF Center, worked from 6:15 a.m. on Nov. 3 to 4 a.m. the next day, before returning for another several hours of work later on Nov. 4.

Carone said in an affidavit that she “witnessed nothing but fraudulent actions take place.”

Carone said she saw workers count some ballots four or five times, and noticed that one of the counters had even counted a batch of ballots eight times. …

Carone also swore she witnessed that workers who received ballots that they couldn’t read, or that had something spilled on them, would get blank ballots and fill them out.

“I confronted my manager, Nick Ikonornakis saying how big of a problem this was, Nick told me he didn’t want to hear that we have a big problem. He told me we are here to do assist with IT work, not to run their election,” Carone said.

“They were supposed to be filling them out exactly like the one they had received but this was not the case at all. The workers would also sign the name of the person that the ballot belonged to-which is clearly illegal,” she said, adding that she told her story to the FBI about what she saw (and, again, under penalty of perjury, she also swore out an affidavit which was included as part of a Michigan suit that aims to get ballots in Wayne County discounted).

“The main concern is, obviously, the clear fraud that occurred in the counting process of the votes in Wayne County, and the way votes were manufactured by workers that were there,” David Kallman, senior counsel with the center, told The Epoch Times.

Naturally, Detroit’s Democratic machine is swatting down the allegations. But, the Times reports: “The suit was notable because it contained five affidavits from poll observers and a sixth from a city of Detroit worker, all of whom said they witnessed election fraud.”