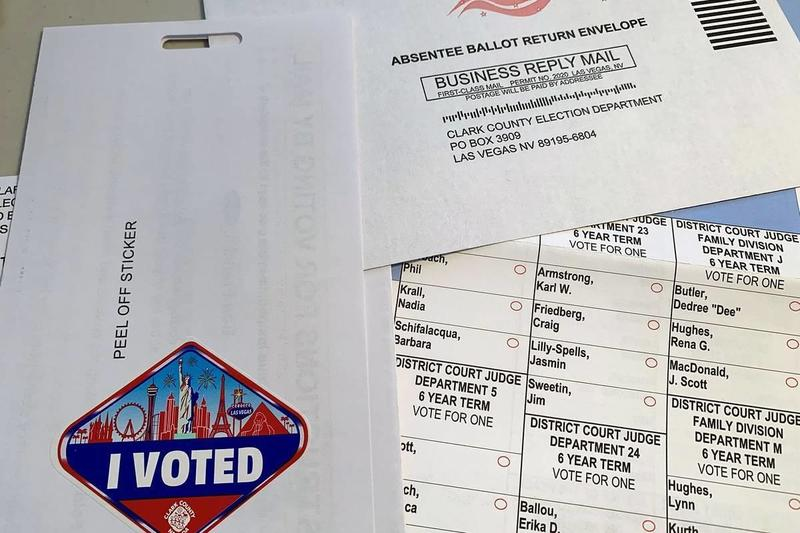 For months, election officials have told Nevadans not to worry about ballots piling up in apartment trash cans or sent to wrong addresses.

“Discarded mail ballots cannot just be picked up and voted by anyone,” a fact sheet from the secretary of state’s office says.

“All mail ballots must be signed on the ballot return envelope. This signature is used to authenticate the voter and confirm that it was actually the voter and not another person who returned the mail ballot.”

I wanted to test that claim by simulating what might happen if someone returned ballots that didn’t belong to him or her. Plenty of people had this opportunity. Billy Geurin, a 10-year Las Vegas resident, found five loose ballots in his apartment mailroom. A reader emailed me a picture of a pile of mail on the side of the road, which included loose ballots. There are numerous pictures of similar examples on social media.

Nine people participated in this test. I wrote their names in cursive using my normal handwriting. They then copied my version of their name onto their ballot envelope. This two-step process was necessary to ensure no laws were broken.

On Monday, I asked Clark County Registrar Joe Gloria about this scenario. If ballots signed by someone else “came through, we would still have the signature match to rely on for identity,” he said. Asked if he was confident the safeguard would identify those ballots, he said, “I’m confident that the process has been working throughout this process.”

He was wrong. Eight of the nine ballots went through. In other words, signature verification had an 89 percent failure rate in catching mismatched signatures.

This could explain how a ballot “signed” by Rosemarie Hartle, who died in 2017, made it through signature verification, as reported by 8 News Now. It could explain how Jill Stokke, a longtime Las Vegas resident, was told the signature on her ballot matched, even though she said she never received it.

County officials aren’t working proactively to determine whether unscrupulous actors abused this vulnerability in a widespread fashion. Gloria’s office doesn’t “have an investigatory team.” He said his office catches fraudulent votes “when they’re reported to us.” So if a criminal doesn’t admit he committed voter fraud, Clark County is unlikely to find out about it. Willful ignorance isn’t an election security strategy.

Leave aside the presidential race. Fewer than 200 votes separate the leading candidates in Senate District 5. In 2018, state Sen. Keith Pickard won his race by 24 votes. Even small amounts of fraud can swing results.

It’s unclear how much voter fraud took place in Nevada. But it’s clear signature verification isn’t the fail-safe security check elections officials made it out to be.