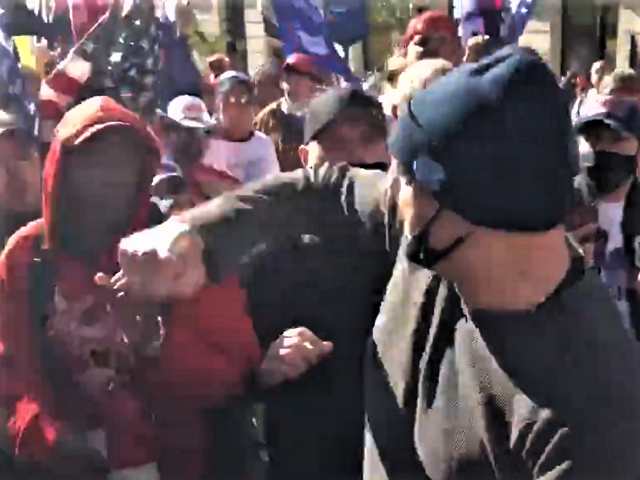 Violence broke out at the Million MAGA March in Washington, DC, on Saturday morning as an “anti-fascist” appeared to backhand a Black Trump supporter. A scuffle ensued where punches were exchanged until police pulled the attacker out of the crowd.

Shortly before the scheduled start of the Million MAGA March Saturday morning, an anti-fascist shoved his way into the crowd of Trump supporters. During the confrontation, the anti-fascist, from Refuse Fascism, appeared to backhanded a Black Trump supporter, possibly striking him in the face, a video tweeted by News2Share co-founder Ford Fischer.

The #MillionMAGAMarch is officially starting in about half an hour, but violence has already broken out.

I’ll have a complete recording up later, but @RefuseFascism came to protest and was physically pushed out by Trump supporters. Some fighting ensued. pic.twitter.com/DdKgb49gLS

Shortly after the attack on the Black man, more shoving ensued and punches were thrown.

“Did you f**king see that,” the anti-fascist said to police officers.

Police officers appeared to ignore the man’s comment and began to escort him out of the crowd.

The scuffle continued with more punches being thrown. Trump supporters called the man a Nazi as police pulled him away.

Trump supporters began shouting “USA, USA,” as police pulled the man away and they continued their march down the street.

The Million MAGA Rally in D.C. is being live-streamed on Breitbart News.

Officially starts at noon with a walk to the SCOTUS.#MAGA 🇺🇸 pic.twitter.com/6lwYObFAWN