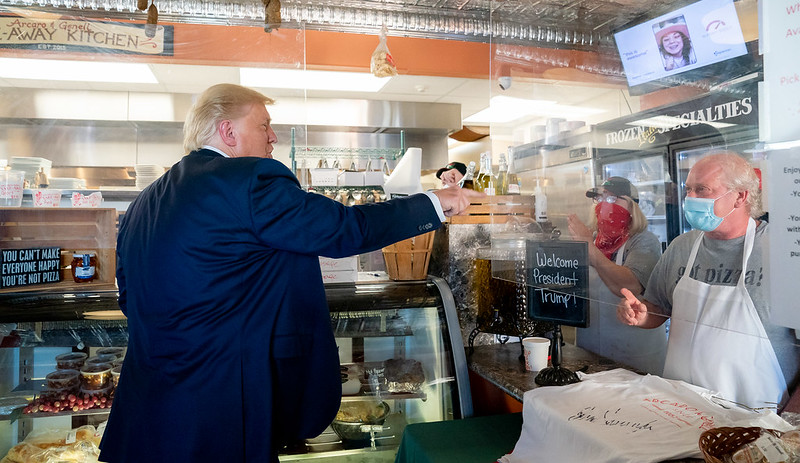 President Donald Trump’s campaign is urging a judge in Pennsylvania to block election officials from giving the state to Democratic rival Joe Biden.

“Unless Bush v. Gore was much ado about nothing, presidential candidates of course have an interest in having lawful votes for them counted and unlawful votes for their opponent invalidated,” the filing said. “That’s particularly true in Pennsylvania, one of a few swing states where recounts or other litigation is ongoing and where the vote margin is close.”

The Bush-Gore reference pertained to the 2000 election, which came down to the state of Florida. Initially, it was called for Gore, handing him a narrow win, but subsequent recounts found that scores of ballots were invalid, leading eventually to a Bush win after the GOP state legislature announced they would award their electors to the former Texas governor.

But that said, in this instance anyway, it looks like Barack Obama might have the last say, according to The Epoch Times:

Campaign lawyer Linda Kerns made the filing in a federal court. It named about six counties in the Keystone State, alleging that those county officials illegally allowed voters to use deficient ballots to cast replacement absentee mail-in ballots ahead of the Nov. 3 election or provisional ballots cast on Election Day to “cure” errors. …

The campaign is attempting to block the state from certifying nearly 700,000 mail-in votes from the most populous counties, including Pittsburgh and Philadelphia—which lean heavily Democratic.

A hearing on the motion to dismiss the lawsuit is slated for Nov. 17. A separate evidentiary hearing is scheduled for Nov. 19, and U.S. District Judge Matthew Brann—an appointee of former President Barack Obama—will decide the case.

The Trump campaign has not been successful in court much, having cases in Arizona, Michigan, and Pennsylvania tossed already. But this case may be different.

“Lancaster, York, Westmoreland, and Berks Counties, for example, did not contact voters who submitted defective ballots or give them an opportunity to cure. They simply followed the law and treated these ballots as invalid and refused to count them,” the suit says.

“Because the counties that followed state law and did not provide a cure process are heavily Republican (and counties that violated state law and did provide a cure process are heavily Democratic), Defendants’ conduct harmed the Trump Campaign. It deprived the President of lawful votes and awarded his opponent with unlawful votes,” the suit contends.

One plaintiff, John Henry, a voter, said that his defective vote was placed under different consideration than voters in other counties, which he alleges is a violation of the Fourteenth Amendment’s equal protection clause.

“In other words, Henry cast a defective ballot that was not counted, but another Pennsylvania voter in another county could cast the same defective ballot and have his vote counted—solely based on place of residence,” the campaign said. “The Defendant counties’ insistence upon counting illegal ballots disparately favored Democratic-leaning counties over Republican-leaning counties.”

Time will tell, but clearly, the president is planning to exhaust every legal avenue, as he should.