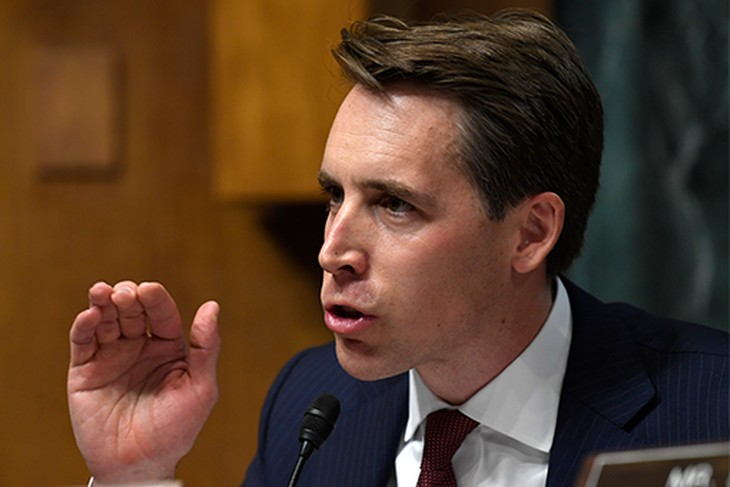 On Tuesday, Sen. Josh Hawley (R-Mo.) claimed that a former Facebook employee approached him with documents presenting “clear evidence” that Facebook, Google, and Twitter coordinate on censorship and that Facebook tracks its users’ behavior even when they leave the platform. Facebook CEO Mark Zuckerberg disputed the first claim and said he did not know about the program in the second claim.

Facebook confirmed to PJ Media that the company does work with Twitter and Google to fight terrorism but repeated Zuckerberg’s insistence that it does not coordinate with other tech companies on content moderation.

“You’re coordinating together to control information,” Hawley said to Zuckerberg. “In recent days, my office was contacted by a Facebook whistleblower, a former employee of the company, with direct knowledge of the company’s content moderation practices. And I want to start by talking about an internal platform called Tasks that Facebook uses to coordinate projects including censorship.”

“The Tasks platform allows Facebook employees to communicate about projects they’re working on together. That includes Facebook’s censorship teams, including the so-called community wellbeing team, the integrity team, and the hate speech engineering team, who all use the Tasks platform to discuss which individuals or hashtags or websites to ban,” the senator claimed.

Zuckerberg admitted that Facebook employees use the Tasks system “for people coordinating all kinds of work across the company.” It seems to be something of a company-wide to-do list.

“What particularly intrigued me is that the platform reflects censorship input from Google and Twitter as well,” the senator claimed. “So Facebook, as I understand it, Facebook censorship teams communicate with their counterparts at Twitter and Google and then enter those companies’ suggestions for censorship onto the Tasks platform so that Facebook can then follow-up with them and then coordinate their censorship efforts.”

The Facebook CEO admitted, “We do coordinate and share signals on security-related topics. For example, if there is [a] signal around a terrorist attack or around child exploitation imagery or around a foreign government creating an influence operation,” the companies will share that information with one another.

“That is distinct from the content moderation policies that we or the other companies have where once we share intelligence or signals between the companies, each company makes its own assessment of the right way to address” concerns, Zuckerberg added.

“I’m talking about content moderation, I’m talking about individuals, websites, hashtags, phrases to ban. Is it your testimony that you do not communicate with Twitter or Google?” Hawley pressed.

“Senator, we do not coordinate our policies,” Zuckerberg explained.

The Facebook CEO admitted that content moderation teams at Facebook likely do communicate with their counterparts at Twitter or Google, but he insisted that this communication is “different from coordinating what our policies are or what our responses are in specific instances.”

Hawley, in an arguably overly aggressive stance, demanded that Zuckerberg commit to “providing a list from the Tasks platform of every mention of Google or Twitter.” Zuckerberg said he would be willing to work with the senator on the issue after the hearing but he was hesitant to commit to sharing search results, likely because he cannot know if any proprietary information would come up in such a search.

“Senator [Ted] Cruz and Senator [Mike] Lee both asked you for lists,” Hawley noted. “You’ve acknowledged that the Tasks platform exists, that it is searchable. So will you commit to providing the information you have logged on the Tasks website about content moderation that your company has undertaken? Yes or no?”

Zuckerberg again hedged, noting the possibility of “sensitivity” that would prevent him from turning over all search results.

Hawley then turned to the program Centra, which he described as “a tool that Facebook uses to track its users not just on Facebook but across the entire internet.”

“Centra tracks different profiles that a user visits, their message recipients, their linked accounts, the pages they visit around the web that have Facebook buttons,” the senator added. “Centra also uses behavioral data to monitor users’ accounts, even if those accounts are registered under a different name.” He showed a screenshot from the program provided by the whistleblower.

“How many accounts in the United States have been subject to review and shutdown through Centra?” Hawley demanded.

Zuckerberg replied, “I’m not actually familiar with the name of that tool.”

A Facebook spokesperson told PJ Media that Facebook staff use Centra to centralize and aid in investigations into complex subjects like coordinated inauthentic behavior — potential abuses of the platform by bots and other tools.

“What we have here is clear evidence of coordination between Twitter, Google, and Facebook. Mr. Zuckerberg knows he has the tools to track this but he either doesn’t remember or won’t commit to letting us see it. We have evidence of Facebook tracking its own users all across the web. Mr. Zuckerberg won’t answer questions about it, can’t remember the name, isn’t sure if the tool was deployed in this way, and won’t commit to giving us basic information,” Hawley declared.

The senator called this state of affairs “both totally unacceptable and totally predictable.”

However, Facebook and Twitter shared a disturbing willingness to rush to suppress a New York Post story about Hunter Biden emails tying Joe Biden to his son’s notorious foreign dealings. More evidence has since bolstered the disturbing claims about Joe Biden’s involvement. A study suggested that Big Tech and the legacy media may have tipped the scales toward Biden over Donald Trump by attempting to bury the story.

Since Hawley did not walk through the exact claims of the whistleblower and the exact messages he saw on Tasks and Centra, it remains unclear if the evidence he cited actually demonstrates coordination on content moderation, contrary to the claims of Zuckerberg and the Facebook spokesperson.

While conservatives are rightly concerned about the power of Big Tech and the bias Twitter and Facebook have occasionally demonstrated in their content moderation, Hawley’s overly aggressive manner may come off as more political theater than legitimate questioning. He needs to better explain exactly what the whistleblower said and how it comports with Facebook’s response.

Earlier in the hearing, Sen. Ben Sasse (R-Neb.) expressed both concerns about Big Tech bias and worry that government intervention will not help matters. Perhaps the Republican Party should take that kind of a balanced approach.