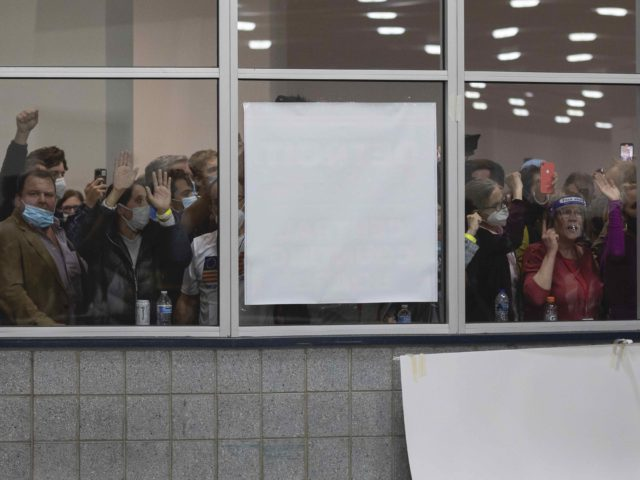 Wayne County, Michigan, canvassers reversed course late Tuesday night and voted to certify the results from the November 3 election, which have been disputed.

The Board of Canvassers had originally voted 2-2 along party lines. The tie meant the election results were not certified.

But later into the night, the Republican canvassers flipped and voted with the Democrats, while the live video stream was down.

“After hours of angry responses from Wayne County residents, the change in course was approved by the two Republican and two Democratic canvassers with the demand that the Secretary of State’s office conduct a ‘comprehensive audit’ of precincts with unexplained out-of-balance tallies,” the Detroit News reported.

It is not clear if the approval was conditional on the “comprehensive audit,” or if the investigation was merely requested.

The News reported the broadcast of the meeting went about as well as the vote counting on Election Day:

The high-stakes vote, with the eyes of the nation on Michigan’s largest county, apparently took place while the video stream for the virtual meeting wasn’t working.

“That passed unanimously,” Republican member William Hartmann said when the video began functioning again. “We just voted on that.”

Moments later, he said, “We’re going to adjourn,” and the board ended its meeting at 9:08 p.m.

WXYZ said the board “voted to certify the results under the stipulation that Secretary of State Jocelyn Benson does a comprehensive audit of the election in the county.”

The Detroit Free Press stated the board “passed a resolution calling on Michigan Democratic Secretary of State Jocelyn Benson to conduct an independent comprehensive audit of all of the jurisdictions in the county that recorded unexplained discrepancies between the number of absentee ballots recorded as cast and the number of absentee ballots counted.”

The Republican canvassers caved after withering attacks from Democrat activists.

Ned Staebler, whose Twitter profile said he lives in Ann Arbor — not even in Wayne County — assailed the two Republicans on the board:

WAYNE COUNTY BOARD OF CANVASSERS - 2 Republican members voted not to certify the ballots- public comment is now open and it is intense. People calling board members racist. This is commenter Ned Staebler: pic.twitter.com/cEsDlxzVXT

“Just know when you try to sleep tonight, that millions of people around the world now on Twitter know the name Monica Palmer and William Hartmann,” he said, referring to the two Republican canvassers, “as two people completely racist and without an understanding of what integrity means or a shred of human decency. The law’s not on your side. History won’t be on your side, he declared.”

The Wayne County Board of Canvassers has reversed course and unanimously agreed to certify the results (upon the condition that the Sec'y of State’s office conduct an audit of precincts across the county).

With the certification by Wayne County, the results will now move to the State Board of Canvassers, which also has two Republicans and two Democrats as members.

Over 100 observers have filed affidavits related to the vote counting process in Detroit. Several individuals have alleged ballots being counted multiple times, ballots arriving in the dead of night, and observers being blocked from watching the tabulation process.