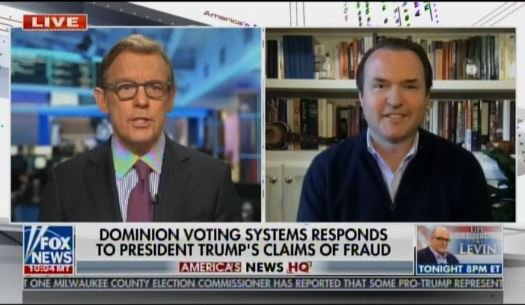 Dominion Voting Systems has been strangely silent since the controversial 2020 election on November 3rd.

On Friday Dominion skipped a Pennsylvania House Committee hearing and lawyered up instead.

Steel insisted there was “no fraud” in the 2020 election. Steel added, “Nothing they are saying is true.”

Steel also said he does not believe ANYONE would alter the results from a US election. Seriously?

Steel went on to refute any and all accusations that they committed fraud in this year’s presidential election.

Steel is a spokesman hired by Dominion to speak with FOX News. It should be noted that this “testimony” was NOT under oath.

The Gateway Pundit has provided numerous reports on widespread voter fraud across the US since election night.

Michael Steel is a Jeb Bush lackey. What a shock!

This Dominion man has no credit whatsoever with his resume of working for Jeb, speaker Boehner, Ryan/Romney, what a joke this man is! https://t.co/94HP1O9J9n pic.twitter.com/3vTWSExGB3