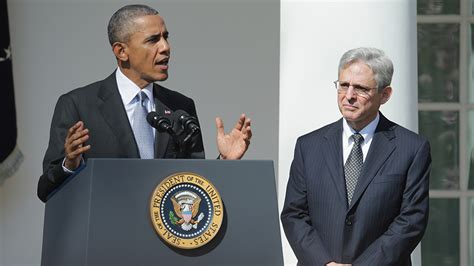 Joe Biden’s pick for Attorney General is a horrible anti-Constitutional hack. That’s why he was Obama’s pick for Supreme Court Justice. In 2016 then-President Obama tried to push through his Supreme Court Judge appointee Merrick Garland and it didn’t work. Unfortunately for Obama, after years of horrible policies, Obama lost the Senate to the Republicans. The Republicans refused to bring in Garland for a vote and held off till the election.

At the time Obama was trying to push through Garland, the NRA released a video to refute the anti-gun nominee Judge Garland.

The NRA ad featured a Venezuelan immigrant who was disarmed by her former Socialist government. She warned us all about the communism that Garland represents.

Unfortunately for the Democrats, there was nothing they could do. They simply did not run the Senate.

Fortunate for America, Merrick Garland is not on the Supreme Court. If he was he would be a far-left radical nutjob. We know this because he still is a far-left unconstitutional nutjob. This is why Biden selected him to be his Attorney General.

The disgusting far-left Law and Crime website claim “In ‘Middle Finger’ to Mitch McConnell, Biden Will Nominate Merrick Garland as Attorney General.” This is who our left has become – Anti-American, rude, censoring, communists.

Recently we saw Garland in action during the General Flynn hearing in front of the entire DC Circuit Court. General Michael Flynn was fired by President Trump based on a lie perpetrated by Comey, Sally Yates, McCord, Strzok, Pientka, Mike Pence, and other Deep State characters. He was later indicted on false charges. Next, the corrupt DOJ threatened Flynn that his son would be arrested if he didn’t plead guilty by the corrupt Mueller gang’s false charges so General Flynn guilty based on the advice of his attorneys who were working with the Mueller gang.

Eventually, after millions in expenses and a new lawyer, Sidney Powell, Flynn’s case was reviewed by a St. Louis prosecutor, and all charges were dropped against the hero General. The case went to the Court to be officially ended but the Judge decided not to drop the case, even though both the US government and Flynn agreed to end it.

Then the case went to the DC Circuit Court after a three-judge panel agreed that the Judge needed to drop the case. The judge asked for it to go in front of the entire DC Circuit Court. This included Judge Garland.

Garland was appointed by Bill Clinton and showed his glaring bias in this hearing. No person has ever been tried in this fashion. The corrupt judge overseeing this case should have dropped this case immediately, instead he insinuated Flynn was a traitor.

Judge Garland was angry and rude to Sidney Powell during this hearing. He asked many questions and pressed Powell on the rationale for ending Flynn’s case even though the prosecutors and the defendants both agreed to end the case. It was insane what the court was demanding answers to because this has never happened before in US history. The judge took over the case despite both parties wanting all charges dropped. The judge become the prosecutor – and Judge Garland and the other Obama appointees were fine with that.

Garland pressed Powell with a hypothetical:

“If all the district court had done was to ask Flynn to brief the arguments on the separation of powers and permitted an amicus filing but did not appoint amicus, would you still argue against it?”

“I think I still would,” Powell noted.

At the end Powell summed it all up nicely:

Thank God the Republicans never agreed to vote on Garland for the Supreme Court. This guy will be a menace as an Attorney General. He has no regard for the Constitution. If he did he wouldn’t accept the position to act for a gang who stole the election.