“I LOATHE YOU!”: Chuck Schumer Gets Absolutely Demolished by Heckling “Transsexual Gypsy” 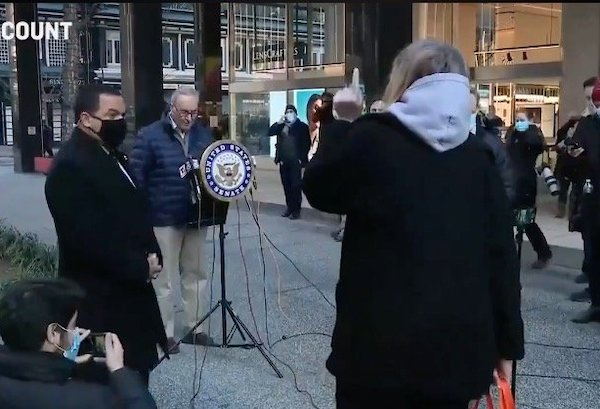 During a press conference in Midtown Manhattan on Tuesday, Senate Leader Chuck Schumer got absolutely destroyed by a heckling person who self-identifies as a “transsexual gypsy.”

Schumer was saying during his speech that those who stormed the US Capitol should be on the no-fly list.

We cannot allow these same insurrectionists to get on a plane and cause more violence and more damage,” Schumer said.

The “transsexual gypsy” then interrupted Schumer, unleashing on him for being a “racist anti-Semite.”

“Remember this, Adolf Hitler was a Socialist and that’s exactly who you follow!” the protester shouted at Schumer. “You’re nothing but a coward!”

According to other reports, a different protester yelled at Schumer, stating, “Traitor! Treason! You’re going down, buddy! Traitor! To this nation! Everyone knows!”

WATCH the hilarious clip below:

The New York Post further summarizes the events that unfolded:

“As long as there is outrage and unrest in our hearts, there’s going to be unrest in these streets.”

The woman launched a series of attacks at Schumer, demanding to know whether he told the US Capitol Police to “stand down” during Wednesday’s insurrection.

“I’m just one voice here right now but trust me, if you do this to 75 million Americans, try to put us in jail, you’re going to have to hire 175 million to guard us.”

As the woman continued on her tirade, Schumer was captured on a news outlet’s mic saying. “Can we remove her?”

When security guards moved in and tried to gently grab her, she screamed, “Get your hands off me!”

“I’m a transsexual and I’m a gypsy, which makes me a minority of color, don’t do it, it’s not going to look good for you Schumer.”

The woman then moved off camera, allowing Schumer to continue his press conference and take questions from reporters, but the typically long-winded pol rushed through them and quickly ended the event as the woman continued to shout in the background.