WATCH: Tucker Carlson Blasts Biden Nominee Who Believes Blacks Are Superior To All Other Races 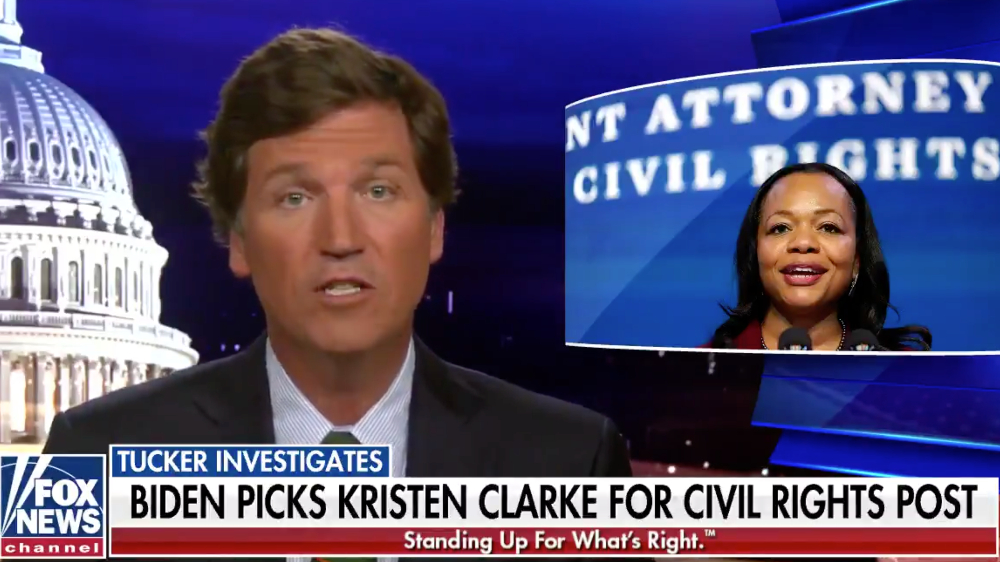 On Monday, Fox News’ Tucker Carlson revealed that the person President-elect Joe Biden wants to run the Civil Rights Division within the Department of Justice has a history of bona fide racism herself.

While Kristen Clarke believes her job is to end hate, Carlson said that, in reality, she is “actually an enthusiastic purveyor of what she claims to fight.”

He began by noting that she has been on his program in the past and has espoused what would be considered very racist concepts if, say, a white person was saying them about black people.

He also noted that in 1994, she wrote a letter to the Harvard Crimson, the campus newspaper, explaining her views on racial science.

“Please use the following theories and observations to assist you in your search for truth regarding the genetic differences between Blacks and whites,” she wrote.

Here is what she espoused:

One: Dr Richard King reveals that the core of the human brain is the ‘locus coeruleus,’ which is a structure that is Black, because it contains large amounts of neuro-melanin, which is essential for its operation.

“Four: Some scientists have revealed that most whites [sic] are unable to produce melanin because their pineal glands are often calcified or non-functioning. Pineal calcification rates with Africans are five to 15 percent [sic], Asians 15 to 25 percent [sic] and Europeans 60 to 80 percent [sic]. This is the chemical basis for the cultural differences between blacks and whites [sic].

“Five: Melanin endows Blacks with greater mental, physical and spiritual abilities — something which cannot be measured based on Eurocentric standards.”

“Even at Harvard, crackpot theories like that were considered deranged and dangerous,” Carlson noted. “After an outcry on campus, Kristen Clarke suggested she didn’t necessarily believe what she had written.”

Likening those views to lunacy, he added that “in a sane country someone like Kristin Clarke would be under investigation by the Civil Rights Division, not running it.”

“How crazy have we become? Well, we will see if Clarke’s nomination will get to the U.S. Senate,” Carlson said. “If it does, we are in serious trouble.”

She’ll be in good company. This week, Biden said that white business owners are just going to have to suck it up when it comes to COVID-19 financial relief – as in, they’ll have to go to the back of the bus.

“Our priority will be Black, Latino, Asian, and Native American-owned small businesses, women-owned businesses, and finally having equal access to resources needed to reopen and rebuild,” he said.

Remember when the left used to oppose blatant racism? Now they embrace it because, really, the Democratic Party, with its history in the Confederacy, slavery, the KKK and Jim Crow laws, has always been the party of racism.